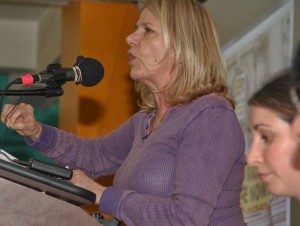 Excerpts from a talk given by Sharon Black, a national Workers World Party organizer and representative of the Baltimore People’s Assembly, at the WWP Nov. 17-18 conference in New York. See video at youtube.com/wwpvideo.

Baltimore, like Gaza, is an occupied city. I’m not asserting that the people of Baltimore are suffering the same kind of brutal terror that the Palestinians are resisting at this very moment.

The comparison between the two is the systematic use of racism, violence and humiliation used to control and subdue an oppressed people. In Baltimore this includes the dehumanizing use of illegal strip searches of women in the street, the handcuffing of children, the kidnapping of Black youth and of course the brutal killings by police that Rev. C. D. Witherspoon described so well.

The fact is that police terror is capitalism’s answer to their economic crisis. Rather than provide jobs, education or health care, the system has resorted to mass incarceration, terror and jails. Its first target is oppressed youth — but police repression has spilled over to the Occupy movement and to the workers and poor as a whole.

This is why the Baltimore People’s Assembly has called for getting the police out of our communities, for jailing killer police, for community control and much more.

I want to end with three points:

Baltimore needs your help. We do not want to fight our battles alone and isolated. Police terror, mass incarceration, racism and all of the other ism’s of capitalism are national problems from Oakland to Baltimore.

In this light, we want to invite you to participate in the Dec. 15 National People’s Power Assembly in Baltimore. Come to this assembly not only so that we can fight as one but also to strategize the next steps in the People’s Power movement.

Second, I wanted to raise what my colleague, brother and comrade, Reverend Witherspoon, could speak more knowledgeably on is that this coming year marks a major milestone in civil rights history. It is the 50th anniversary of the Poor People’s Campaign and the August Jobs and Freedom march and many other significant events for the civil rights movement.

Let’s claim this year, the 50th anniversary, as part of our struggle: unite the most oppressed with those who are fighting for jobs, workers’ rights, immigrant rights, student rights and push the struggle forward to it’s logical conclusion. Let’s link the struggle against racism with the fight against capitalism.

The Baltimore People’s Assembly is planning to commemorate the Poor People’s Campaign by marching from Baltimore to Washington, D.C., later in May.

The last point has directly to do with the People’s Power Assemblies. We do not know what crisis will occur or exactly how resistance will develop. Will it be resistance to austerity or police repression? Will the point of resistance be on the job or will it be in the streets with the unemployed?

We have no perfect way of predicting this. What we do know is that the workers have the power to shut the system down and that the People’s Power Assemblies can play a very important role in encouraging that development.

Like the European Occupy movement and other Occupies, the Occupy Wall Street Movement has proven helpful in giving a boost to the trade union and workers’ movement; albeit, it has been from the outside of it.

We are not narrow or sectarian, nor are we seeking to control every PPA. That would be detrimental to the movement.

But we need to be deadly serious in contributing to pushing, nurturing and birthing the People’s Power Assemblies.

We need to ultimately look forward to the formation of an international revolutionary council that could grow out of such a movement, whose goal will be to plan coordinate and execute a global insurrection that will sweep away capitalism and save the planet.

Power to the People!

Power to the Workers!

Power to the Oppressed!