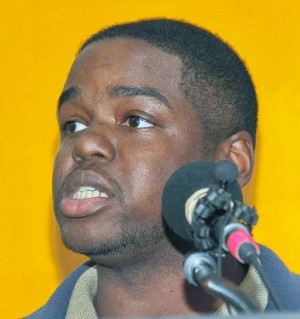 Excerpts from a talk given by the Rev. C.D. Witherspoon, from Baltimore, at the Workers World Party Nov. 17-18 conference in New York. See video at youtube.com/wwpvideo

As president of the Southern Christian Leadership Conference Baltimore Chapter founded by Dr. Martin Luther King, I am so excited to be here today and stand in arms with you. I believe this is the vision Dr. King had for the entire world.

Police brutality is a vicious and brutal attack on Black, Brown and poor people alike. It is an attack at the hands of a very vicious, capitalistic, materialistic system that is not only innately void and ill-equipped with the human integrity and pride to be able to stand up for issues concerning humanity, but it is also an indictment upon our system as a whole.

It is critical for us to understand we have a task at hand. Brothers and sisters from North Carolina walked 41 miles with us the beginning of this year to Washington, D.C., despite being threatened with not being served because of our alliance with brothers and sisters in the Occupy movement. We locked arms because this fight is going to be won with our ability to come together.

What we have attempted to do in Baltimore is to build a People’s Assembly — an alternative to the power structure that has proven time and time again not to give a damn about working-class and hardworking people. What we have attempted to do is to get down into the communities. That required us to roll up our sleeves, to get past our perceptions, our misgivings, to check our egos at the door, and to begin to start addressing the needs of the people.

We became exposed to different issues.The beating to death of Brother Anthony Anderson — a gentleman who was just walking in his neighborhood in East Baltimore without knowing what was about to happen on his way to his granddaughter’s birthday party. He was hoisted up into the air by “knockers” — a specialized police unit that is grafting terror across this entire country — we all have these type of units in our communities. This police unit launched him up into the air, slammed him down on his head and killed him almost instantly, in the presence of his mother, in the presence of his 2-year-old grandchild.

We have a situation in a relationship with David Kim over in West Baltimore. A disabled man, partially paralyzed, who was shot by the police. The police officer sat in his cruiser and shot four times out into the general public endangering the entire city at that particular time with no regard to the community.

Then we had demonstrators from East Baltimore that were fighting for jobs. This proves to you that the victims of police brutality are also the people who are having their utilities shut off, having their recreation centers closed down. This is all about capitalism. These people took to the street to challenge. They challenge the promise of the provision of jobs that was made to them.

And when they challenged it, the system responded, it attacked, it brutalized and arrested those demonstrators. One was beaten severely, kicked, stomped and maced. And as a result of what they did was they bogged him down with a whole bunch of charges to deter him from moving forward with addressing the issues.

I want to encourage you to maintain the fight because, when Anthony Anderson was killed in the presence of his mother, his grandchild and his entire community, the police lied about what happened. They said he swallowed drugs. But the autopsy report that we demanded — “in 48 hours” but they delivered it in 28 because we knew our rights and we were going to demand and file a Freedom of Information Act request — and it said there was a homicide. We need to start doing that, knowing our rights, following through with that and demanding justice for our community.