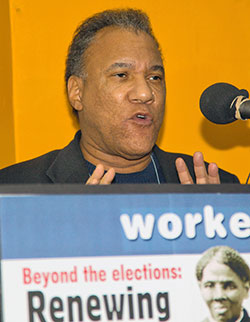 Excerpts from the Nov. 17 talk given by Larry Holmes, WWP First Secretary and Secretariat member, at the Workers World Party Nov. 17-18 conference in New York.

There is a contradiction that we face as communists, as militants. We have to have two levels of consciousness simultaneously — to be concerned about the struggles that we are in and that our allies are in and know their consciousness.

If you’re being evicted, you know where your consciousness is but also have that global consciousness. We can’t have an unnecessary division between those who are fighting in the communities and those who are sitting up somewhere discussing big issues, historically and analytically, using Marxism or whatever else, seeming to be separate from the masses.

Our job as a revolutionary party of the working class, most importantly of the most oppressed, is to minimize that dichotomy.

We are going to hear a lot about the so-called “fiscal cliff.” It is worldwide austerity in Greece, in Spain, in Portugal, in Ireland, in South Africa, all throughout Latin America and here in the U.S.

From the point of view of the capitalists, the idea is to fix their system on the backs of the workers. They can’t get it from profits because of overproduction, so let’s just go literally into the body of the workers and get more pounds of flesh by stealing things from them. It is a mad, insane exercise in destruction, social destruction.

It really should be called “the terminal crisis-of-capitalism cliff.”

The problem is that as wonderful as this pan-European workers’ action was, it must go further.

What is necessary is a complete revival of the revolutionary socialist perspective among the vanguard organizations and the working class.

For so many years now, it has been the perspective in the working-class movement — even among the best elements — that we can’t make a revolution.

Since we don’t see it on the horizon, we fight a more limited battle to defend workers’ interests, for reforms. There is absolutely nothing wrong with this, and anybody who tells you that is not helpful.

However, when you have a crisis of this magnitude, the imperialists are no longer interested in negotiating with you. They want to rip up contracts and rip up your unions. And they are not just fighting you on a local level. They are very global — they are very centralized even though they may be fighting each other on a certain level.

And when they are coming after you with carpet bombs, it is hardly effective for us to be having little guerilla battles — each country, each city, each region. That is going to take place, and that is inevitable. But we have to have a perspective about being able to rise to the assault that is upon us. Part of that is reviving the revolutionary perspective.

It is time to say it is time for socialist revolution, on a worldwide basis. That orientation informs how we fight.

The Occupy movement had contradictions. Occupy activists had, generally speaking, very little knowledge of oppressed people and the national question. Some of them have evolved and gotten better.

All the boundaries that seem to divide all these movements — we have to work hard to eradicate them. In some ways, OWS helped that. OWS helped push labor here until the elections came and threw water on the labor movement. I believe the Occupy movements in Europe fought for the perspective of a pan-European workers’ strike.

We’ve got to look at our working class differently. Karl Marx talked about the different stages of trade union development based on the level of the productive forces. With this highly messed-up state of world capitalism, with this permanent crisis, it is clear that you’ll only get so far struggling in a limited way.

The elections were a big problem. The Democratic Party just sucks out all the energy and all the resources out of most every movement.

The demographics of the working class are changing. This was the first time that an African-American president was reelected based on an electorate that was 45 percent Latinos/as, African Americans, Asians, women, lesbian-gay-bi-trans-queer, and so forth.

Obama won 80 percent of those demographics. He only won 39 percent of the white vote. This is a cultural and political shock to white supremacy. We’re being led into the darkness on top by [the Democratic Party]. But below, that is significant. It bodes well for the future.

The majority of the Democratic Congressional Caucus is women. It is not revolutionary, but it is a big change. The problem is that it is trapped within this bourgeois party that says don’t fight, don’t occupy, don’t demonstrate. It needs to break out. Imagine if the demographics that were displayed in the election were in the street flexing their muscle together.

Our party can play a helpful role in reviving the revolutionary perspective in this country and worldwide. We are not interested in small polemics to make ourselves look good or just to put down someone else. We’d rather sit down and see if we can make common cause, and if we can’t, we move on. We can be helpful in uniting socialists. We are still excited about what happened about three years ago in Venezuela when the socialist party there had a conference and they invited socialists and communists to talk about forming a Fifth International.

Finally, with the People’s Power Assemblies, we have learned something from the youth in OWS, and many of them will be with us. Maybe we can in many ways proceed to get deeper and deeper into the most oppressed sections of our class.