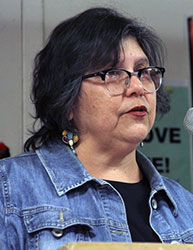 Excerpts from the Nov. 17 talk given by Teresa Gutierrez, WWP secretariat member and an organizer of the May 1st Coalition for Worker and Immigrant Rights, at the Workers World Party Nov. 17-18 conference in New York.

A few days after Hurricane Katrina obliterated the Gulf Coast, comrade Johnnie Stevens and I traveled to Louisiana to deliver a modest amount of aid and carry out other work as needed.

As we filled the car with gas at a truck stop on the road between Houston and New Orleans, one Latino brother who spoke Spanish came up to us, very animated. He asked me to tell Johnnie: “They want to get rid of people like us. The government wants to kill off Black and Brown people.”

Back then, like now, the capitalist class aims to take advantage of hurricane devastation to obliterate the remaining affordable housing projects, to disperse the Black community, as well as the sick and the poor, to get them out of sight, so that people are unable to unite or organize.

How more devious and heinous can the ruling class get than to take advantage of such catastrophes for gentrification and racist displacement?

Once again, the capitalist system is carrying out policies that will most affect workers of color. There is a vicious racist war of terror unleashed against the oppressed here and around the world.

But all workers are in jeopardy. When you participate in solidarity actions for the workers of Europe, when you consider sending a solidarity delegation to Greece or Spain, then you know the shit has hit the fan. The capitalist crisis that for decades wrecked the lands of Asia, the Americas and Africa has come to the shores of the imperialist world.

Nothing is in place to guard you or protect you from yet another hurricane, or raging fire, or pounding tornado, or a devastating drought. Here in the richest country of the world, a child could and does die from a toothache!

The intolerable conditions that capitalism with its last breath has created are creating desperate conditions for billions of people.

But we are a revolutionary party, a socialist organization that aspires to create communism right here in the United States, where the ultimate end for capitalism will occur. We have a unique and profound task to hit the final nail in capitalism’s coffin.

The time has come to build People’s Power Assemblies

Our party leadership maintains that at this moment, the conditions created by this period of capitalism lay the basis for a movement for People’s Power. This is work and thought in progress.

A massive movement of People’s Assemblies can and must happen. We are not the only ones; others have made this call, here and abroad. This idea was raised by our party in 1992 when we united activists in Baltimore and called for dual power there.

These conditions are even more ripe today. The misery and devastation brought on by hurricanes and disasters alone have created ripe opportunity for building People’s Power Assemblies.

This is what is behind the relief efforts by organizations that have broken away from the Democratic Party and are ready to take the struggle in another direction.

Our goal is to work with them all, with the politicals, the activists, with those in the struggle to build this movement for a People’s Power Assembly. That is the aim of the Dec. 15 meeting in Baltimore, and we urge you all to be there.

A component of the PPA be used as a vehicle for the party to deepen its roots among the working class. Work with the politicals, build coalitions, but bring workers into the class struggle and eventually into the party.

This is a time for boldness; this is a time for confidence, when revolutionary communists and socialists should not only link up with all those disaffected with the capitalist system in order to carry out a massive fightback movement, but bring them into the working-class struggle.

This is a time to examine the 1930s, when communists played a major role in every single struggle. Whether it was for food, jobs, a signal light, in Washington or in the neighborhoods, they were the boldest and fiercest fighters.

It is important that we get shoulder to shoulder, on the ground, in the trenches on this issue because we must help give the movement a class perspective. If we don’t, our class will not go further and might even suffer setbacks.

Hurricane Sandy and climate change as a whole demonstrate vividly the need for struggle with a revolutionary class perspective. People’s Power Assemblies should participate in everything from organizing soup kitchens to rebuilding homes.

But the government and Wall Street have billions of money and resources, booty that was made by the blood and sweat of our class. Andwe want it back. We need and demand a national jobs program that can only be carried out by the government. We know we can’t depend on the capitalist government nor its parties. But until workers have seized the means of production and built a workers’ government, we must fight to wrest every single damn concession we can.

We must take the rising waters of Hurricane Sandy that washed out much of Wall Street and turn those waters into the rising rage of the workers and oppressed. That is a rising tide that will wash out Wall Street forever. It will destroy the capitalist system once and for all.