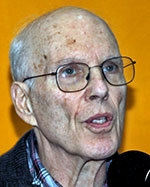 Excerpts taken from the Nov. 17 talk by Fred Goldstein, WWP secretariat member and author of “Low-Wage Capitalism” and “Capitalism at a Dead End,” given at the Workers World Party Nov. 17-18 conference in New York.

I want to talk about an event in the history of science that’s somewhat remote, but I think demonstrates the crucial relationship between theory and correct practice.

On Sept. 23, 1846, an astronomer in Paris, who was studying reports and calculations of an unexpected deviation in the orbit of an outer planet, sent a message to an astronomer in Berlin, who had been observing the solar system through his telescope, and told him that if he pointed his telescope at a certain time, in a certain precise direction, he would see a new planet that had never been seen before.

The German astronomer followed the instructions, pointed his telescope and for the first time saw the eighth planet ultimately named Neptune. Up until then, only seven planets were known.

What is important for us is that this observation was done on the basis of the theory of planetary motion worked out painstakingly two hundred years before by a scientist named Johann Kepler.

Fast forward to August 1917 in Russia. The tsar had been overthrown in February, the workers had won many freedoms, the war was going on, and Lenin was busy studying everything Marx and Engels wrote on the theory of the state, on the Paris Commune and on force in history. Based on this he wrote “State and Revolution.” By focusing on the theory of the state, Lenin kept his own party and the workers on track to the first socialist revolution in history.

In the same way Mao studied Marxist theory to enable him to get the confidence and ability to lead a small detachment of communist workers and millions of peasants to sweep away all reactionary classes and imperialism and establish the Chinese revolution.

Now fast forward again to the year 2008 and the unfolding economic crisis then engulfing capitalism. In the fall of that year, the party used Marxist theory of capitalism written 150 earlier to point its theoretical telescope, so to speak, on the jobless recoveries of the past two downturns. We studied the development of technology and how it created permanent, growing mass unemployment, speed-up, low wages, the destruction of the upper layers of the working class, mostly the white, male, privileged layers.

Capitalism at a tipping point

On that basis we postulated that the capitalist system would not be able to recover from this crisis as it had recovered from so many crises in the past.

On this basis we determined that the capitalist system had reached a tipping point: that workers were being thrust into global wage competition in a race to the bottom of the income scale; that technology was growing as a factor in the development of capitalism at an enormous pace, invading virtually every form of employment — from construction to serving in a restaurant, to steel and auto production, to computer programming and even medicine.

We said at the time that underneath the crisis was a new stage of capitalist overproduction — a stage in which capitalists have forced so much productivity upon the workers through technology and lowering wages so much that as soon as the capitalist system begins to start up again, such a great quantity of goods is produced so quickly that they cannot be sold at a profit. The markets would not be able to absorb the goods and services, and the system would either stagnate or go down again. Layoffs would continue and the working class and the oppressed would be pushed further and further up against the wall.

Now, just shy of five years since this crisis began in December 2007, Europe is in an agonizing debt crisis and going back into a recession, including Germany and England. Mass unemployment and cutbacks are plaguing the working class, especially in Greece, Portugal, Spain, Ireland and Italy. Japanese capitalism has shrunk in the last quarter, and unemployment is on the rise. Capitalism is slowing down worldwide, in India, Russia, Brazil, and growth in the Chinese economy has begun to sharply decline.

In the U.S. two and a half years into the capitalist recovery, there has not been a dent in mass unemployment. At the present rate of job growth, the unemployed will never be rehired. Long-term unemployment, six months or more, is at a record high. The rate of job creation does not even keep up with population growth. Millions have given up and dropped out of the work force.

This is the longest, most severe jobless recovery since World War II. Whatever recovery there has been was for the bosses and the stock market, while the workers sink deeper into hardship and crisis.

A generation of youth is hitting a brick wall. If they have the resources to go to college, they end up as indentured servants, owing a lifetime of student debt — over $1 trillion now. They cannot use their skills to get jobs because the jobs they prepared for don’t exist in millions of cases.

If they don’t have the resources to go to college, they face low-wage, dead-end jobs or worse — prison through the school-to-prison pipeline.

The situation of youth in the U.S., Europe, the Middle East and all around the capitalist world is truly a mark of capitalism at a dead end. If there is no future for the youth, there is not going to be any future for capitalism.

Now that the elections are over in the U.S., the ruling class and their politicians are in a big dispute over how much more suffering to inflict upon the masses and how much money should be diverted from services to free it up to pay the bankers.

This is the dispute over what they call the “fiscal cliff.” But for the masses it is not a fiscal cliff. It is a “cutback cliff” that the bankers and their politicians are trying to drag us over.

We are supposed to be relieved if they strike a “grand bargain” and try to put some small tax on the rich, while they rob us of Medicaid, Medicare and Social Security, among other things.

To get back to revolutionary theory, our science tells us to build a revolutionary workers’ party and prepare to help the workers make a revolution when capitalism creates the right conditions — the way Lenin, Mao, Ho Chi Minh, Kim Il Sung, Fidel, Che and Amilcar Cabral all did.

It tells us that it takes supreme organization, a great store of experience in the class struggle, a profound understanding of the capitalist class enemy, an understanding of the state and the study of previous revolutionary successes as well as failures. We must create an organization that will be a combat organization steeled in the struggle of the workers against exploitation and every form of oppression — racism, sexism, the oppression of lesbian-gay-transgender- bisexual-queer people, of the disabled, of immigrants.

Above all the leadership and the rank and file as well must strive to master the fundamentals of Marxism and working-class history as an indispensable weapon in the day-to-day struggle — whether it is for a street light or conducting a general strike. It is our compass that keeps us on course at all times.

It is on the basis of Marxist theory that we foresee a future of social upheaval and revolutionary opportunity as clearly as the French scientist saw that Neptune would appear. This lies ahead — despite the lack of widespread mass struggle we are all living through right now.

In that spirit we want to build the People’s Power Assemblies. We want build our party. And right now we want to tell the bankers, the bosses, the Obama administration and the Republicans: we will not be dragged over your cutback cliff.

Fight the bosses! Build the party! Study revolution! Down with capitalism!