Protesters gathered at hundreds of Walmart stores across the country on Nov. 23, or “Black Friday,” the heaviest shopping day of the year, to support Walmart workers on strike for better wages and working conditions.

In Oakland, Calif., the protest began even earlier, at 10 p.m. on Thursday. Walmart workers had been forced to leave their families on so-called “Thanksgiving” and open the doors at 8 p.m. so the store could pull in shoppers ahead of the competition and make greater profits. A picket line was held in front of the store, while demonstrators handed out educational leaflets in support of workers’ rights to organize and not have to work on the holiday. About 40 people from Occupy Oakland periodically went into the store and loudly advocated for the workers.

Workers at Walmart, the most notorious anti-union corporation in the United States, can barely survive on the extremely low pay they receive. According to an internal pay plan recently obtained by the Huffington Post, employees can work at Walmart for decades before earning much more than minimum wage ($7.25 per hour). Workers began striking against working conditions and low pay in September. They stepped up the fight and drew in support from people around the country on Black Friday. 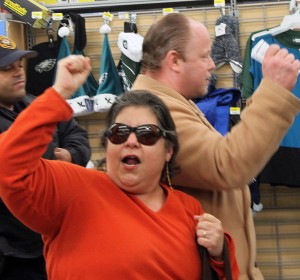 The Food & Commercial Workers union (UFCW) noted in a press release that Walmart workers in Miami, Dallas, the Bay Area and Wisconsin walked off the job on Thursday and that workers from Chicago and Washington, D.C., joined them on Friday. UFCW said 1,000 Black Friday protests were expected in 46 states.

In Dearborn, Mich., at least 50 people turned out, primarily union workers from the UFCW and organizers from Occupy Detroit. The demonstration started with the chant, “Walmart workers deserve respect!” Walmart bosses would argue that workers who want health care, living wages and decent working conditions should quit and find another job. But in an increasingly shrinking job market, they have no choice but to stay and fight. As the demonstration ended, the crowd chanted to the Walmart workers, “You don’t need your boss; your boss needs you!”

Protests were held at Walmart stores in several other cities in the Bay Area, including Richmond, San Leandro, San Pablo and San Jose, as well as in Chicago; St. Paul, Minn.; Landover Hills, Md.; and in several cities in Colorado, Florida, Kentucky, North Carolina and Texas. One of the largest demonstrations was held at the Walmart store in Secaucus, N.J.

Ray Duprey and Terri Kay also contributed to this article.