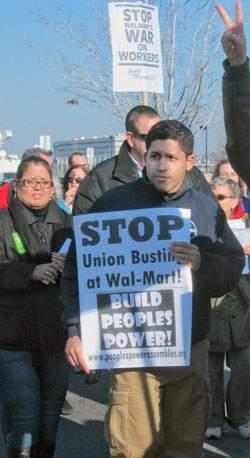 Secaucus, N.J. — The capitalist 1% class is trembling at the specter of a union victory at Walmart, the largest multinational corporation in the world. On Black Friday, the busiest shopping day of the year, shoppers did not just find cheap goods. They encountered some class truth.

In more than 1,000 stores in 46 states, a multitude of actions took place. They included not just community and labor support but strike actions by many Walmart employees.

This is historic and in some ways unprecedented. It could signal a turning point of struggle in the midst of a deep economic crisis. Workers here and abroad face an unparalleled assault and for the most part are on the defensive. But Walmart could be a sign that workers are going on the offensive.

Here in Secaucus, N.J., several hundred community, labor and Occupy Wall Street activists gathered at the Walmart store. Several tactics were used, including mic checks inside the store, leafleting shoppers, pickets in front of the store and on the sidewalk for passersby to see, and the ever popular Rude Mechanical Orchestra, which marched up and down in front of the store playing union songs.

Activists boldly gathered inside the store to chant and talk about the goals of OUR Walmart, before being brusquely escorted out by guards. Shoppers not only stopped to take cellphone pictures of the protests but listened to their message.

The issues of low wages, cuts in benefits and lack of respect and dignity on the job had to resonate with them. After all, you don’t shop at Walmart if you are making a quarter of a million dollars a year.

Certainly the owners of Walmart don’t need to shop there. The Walton family has accumulated as much wealth as the bottom 40 percent of the people in this country combined — a whopping $73 billion to $89 billion!

New Jersey shoppers smiled as they took protesters’ pictures. So did some of the workers on the job. Outside, drivers honked their horns in support.

Walmart attempted to dismiss the significance of the Friday actions. Yet the week before, the megacorporation had requested that the National Labor Relations Board issue an injunction against the protests — in flagrant violation of the right to organize and in step with their countless retaliatory measures against the workers.

With each passing day, the possibility of organizing a union at Walmart becomes stronger. Workers in right-to-work states like Texas, Florida and Tennessee are joining workers in more liberal areas as they walk out and go on strike, many all alone.

U.S. workers are fed up. A flame has beenlit that could burst into fire ­worldwide. 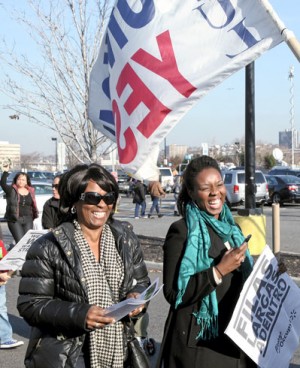 Walmart workers had to contend with the threat that they would be fired if they participated in the strike. The common practice at Walmart is that when workers complain about working conditions, bosses make their schedules chaotic, cut their hours or fire them. Yet many did strike on Black Friday. In California some participated in civil disobedience that brought arrests.

Walmart is the largest employer of Black and Latino/a workers in this country, who experience brutal racism both on the job and in their communities. They are ripe for organizing. In 2011, Walmart was forced to settle a lawsuit brought by workers in California who had been called “f—-ing wetbacks” and were told that “Mexicans are only good for cleaning homes.” Even some with legal status were threatened with deportation. The Waltons give generously to anti-immigrant politicians and campaigns.

A Black pharmacist who blew the whistle on Walmart for dumping expired drugs at a store in an impoverished Black community was fired. Several West African workers filed a lawsuit against Walmart after their bosses told them too many Africans worked in the Colorado store.

But history is on the side of the Walmart workers. In the 1920s and 30s, companies like Walmart counted on threats and intimidation to deny workers their rights. Goons beat and intimidated workers, trying to break their struggles. But unions began to thrive and the government had to make concessions, like a national jobs program.

The masses at that time organized for themselves in a genuine people’s assembly movement, providing food for the hungry and money for rent, much the way Occupy Sandy is doing today.

The campaign at Walmart provides a great opportunity for class struggle. Let’s take it. n