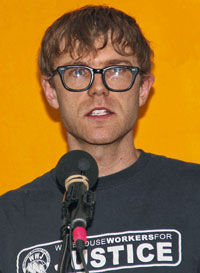 Excerpted from a talk by Dante Strobino, an organizer with United Electrical Workers, at the WWP National Conference on Nov. 17. He was in Elwood, Ill., during the Walmart workers’ strike and rally.

Walmart, the world’s largest private sector employer, has been entirely union-free in the United States since its founding in Arkansas 50 years ago. The labor movement has launched many campaigns against the company for two decades. But until recently, Walmart had never seen workers’ actions with such a national character, affecting all levels of their operations.

The key to Walmart’s success has been getting low-cost goods to customers quickly. This is what makes it so vulnerable to work stoppages in the global supply chain.

Workers have been organizing in the logistics industries that supply the goods between California and New Jersey ports, and in the massive warehousing hub outside Chicago. The city transports half the nation’s rail freight and is the world’s third-largest container port.

Organizers agree on the disproportionate power warehouse workers have to disrupt the company’s just-in-time supply chain. Seventy percent of Walmart’s imported products travel through the distribution center in Elwood, Ill.

Workers have also been organizing retail stores countrywide. Most of this organizing is done with a new model, as in the unorganized U.S. South, not demanding immediate union recognition, but allowing workers to build power.

From Louisiana immigrant “guest” shrimp workers striking over forced labor and wage theft to California warehouse workers walking out and marching 50 miles from Riverside to Los Angeles, Walmart workers are fighting back. 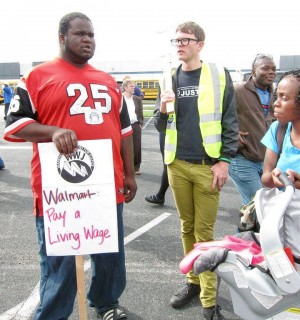 The Warehouse Workers for Justice Campaign, led by United Electrical Workers and Change to Win, has been organizing Chicagoland warehouses for almost three years. Seventy percent of them employ temporary workers rather than direct hires.

WWJ has seen short checks, unpaid overtime, forced work off the clock and other abuses in these warehouses. Some workers sleep in foreclosed homes and tents because they cannot afford rent.

In March, WWJ organized a public hearing on International Women’s Day on wage theft and rampant sexual harassment of women warehouse workers there, as bosses have no accountability.

In late September, WWJ organized a workers’ march through Elwood’s warehouse to deliver demands to the boss, who chased them with a forklift. Then, 38 loading dock workers struck against unfair labor practices for three weeks.

At the strike’s end, thousands attended a mass rally on Oct. 1. There, 17 community, labor and clergy supporters were arrested during a civil disobedience action blocking the road so trucks couldn’t enter the warehouse. They forced Walmart to shut it down for the day, costing the company millions of dollars.

Fired workers were reinstated and all strikers won three weeks’ full back pay.

On Oct. 9, hundreds of retail store workers in 12 states struck for two days. November has seen a walkout at an Ennis, Tex., Walmart, and a sit-in and strike at a Richmond, California store.

OUR Walmart campaign is organizing retail workers backed by the United Food and Commercial Workers Union. Workers allege that Walmart has responded to their efforts with the same hardball tactics it perfected in past anti-union campaigns.

OUR Walmart brought 200 striking Walmart workers from 28 stores in 12 states to a shareholders’ meeting in Bentonville, Ark., on Oct. 10.

A Walmart memo leaked to the Huffington Post confirms the seriousness with which the company views the strikes, revealing organized labor’s power when it taps into strong community support, utilizes social networks, and engages in direct action.

Low-wage workers are winning and building power. Walmart workers have already won some local grievances. The most dramatic concessions have been made to warehouse workers, not retail. For example, WWJ won over $1 million in stolen wages for Chicago-area warehouse workers.

Oncelow-wage workers take down Walmart, there will be a huge shift in organizing all unorganized workers from coast to coast, North to South. n