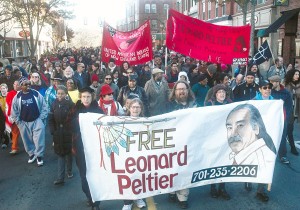 Hundreds of Native people and their supporters gathered in Plymouth, Mass., on Nov. 22 to commemorate the 43rd annual National Day of Mourning — a protest of the “Thanksgiving” holiday.

Moonanum James detailed the history of the NDOM, saying that “the Pilgrims and Native people certainly did not live happily ever after.” Indigenous speakers described current conditions for Indigenous people, including the high youth suicide rates on some reservations, and went over the history of Native nations following the arrival of European settlers.

Juan Gonzalez gave a statement from the Mayan elders that the world is not going to end on Dec. 21, 2012, despite false claims by some non-Mayan people to that effect. “The world already ended for us in 1492” when Columbus arrived, said Gonzalez.

Mahtowin Munro explained some parallels between the Palestinian and Native struggles and expressed solidarity with the people of Gaza. The assembled crowd listened intently to a statement from Leonard Peltier. Later, they marched through the streets of Plymouth to a rally at Plymouth Rock, described by Moonanum James as a “monument to racism and repression.” Other speakers included Tiokasin Ghosthorse, Rosalba Gonzalez, Anawon Weeden and Stephanie Adohi. A full audio of the program is available at tinyurl.com/ccxzg6t.