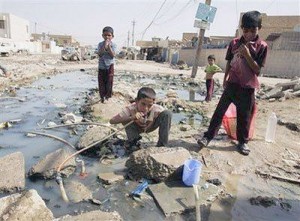 The Pentagon launched the Desert Storm war against Iraq in January of 1991, destroying much of Baghdad’s water and sewage infrastructure with savage bombing raids. Strict sanctions against Iraq prevented full recovery in the 1990s, and the 2003 imperialist invasion added to the damage.

After five years of occupation, this 2008 photo from Sadr City in Baghdad shows Iraqi children drinking water from these wrecked pipes. Cholera, a gastrointestinal disease, and typhoid, which had been virtually eradicated in Iraq by 1989, made a comeback under the Western imperialist occupation. Today, the electricity and water supply systems in Baghdad are in even worse condition than in 2008.

A couple million people in the Northeast U.S. have just experienced Superstorm Sandy and the collateral suffering produced by capitalist climate change and neglect of the infrastructure. The poorest and most oppressed have also received the least relief. This has placed them closer to the Iraqis, who have suffered for 22 years from the Pentagon’s direct destruction.