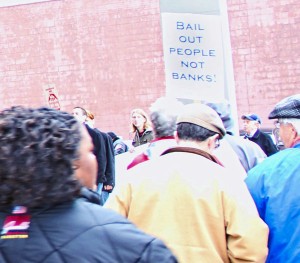 Detroit — More than 100 friends and neighbors of the Cullors family in northwest Detroit, including anti-foreclosure activists and dozens of unionists, gathered at their home Nov. 10 to protest the family’s imminent foreclosure and eviction.

The crowd set off through neighborhood streets, chanting and passing out leaflets. They ended the march at a local branch of Bank of America, which has refused to negotiate a loan modification for homeowners Jerry Cullors and Gail Cullors. Bank of America officers shut the doors to the bank and refused to receive a letter of protest.

Jerry Cullors, now a retired bakery truck driver and member of Teamsters Local 51, recently took steep pay and pension cuts when his employer, Wonder Bread, went into bankruptcy. This resulted in the couple falling behind on their mortgage payments. Bank of America led the Cullors to believe they qualified for a loan modification, but then began foreclosure proceedings.

On Oct. 30, activists physically staved off the family’s eviction and prevented authorities from breaking into the house and taking their belongings to a curbside dumpster. Detroit police were prepared to carry out mass arrests, but an emergency stay was issued by a court that prevented this from happening.

It is expected that neighbors and activists will pack the court on Nov. 13 to show the judge that the community demands a stop to this injustice by Bank of America and Fannie Mae, the federal-government-owned entity that now owns the Cullors’ loan.