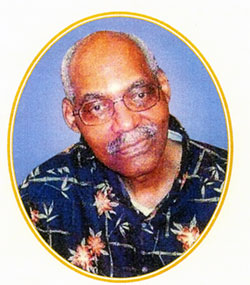 James Frederick Ricks came from rusty, dusty Lackawanna, N.Y., once a steel town near Buffalo. He became a New Yorker at 16, employed by Billboard Publications in that favorite entry job of writers in all media — the mailroom. Like fictional mailroom workers, he did not remain there long, and ultimately became head of the Copy Center, the locale of many stories he told.

Once someone phoned him: ”Jim, I’m trying to print this damn report and they’re on my back and the machine is dead. Ya gotta help me!” Jim solved this terrible emergency by plugging the machine into the outlet.

The problems were not usually so simple. It was a pressure job, the phone constantly ringing with frantic calls for help. All through many organizational changes and administrative turnovers, the company hung onto Jim to meet emergencies and solve their problems.

He always found a way to defend the workers in his department. If someone was not very skilled, he would train and protect them.

So many were nourished by his great-hearted generosity. His own and other children had a person to admire and emulate, who dealt with them with humor and understanding.

One hot summer night he took his kids, Ellen and Stacey, to a poetry slam in the Village. When they left at 1:30 in the morning and got in the car to go home, the battery was dead. It was so hot, so late, so far from home, and he had to get up for work the next day. Telling the story, Jim smiled and said, “We just found a cab and went home.” How cool was that: a hard-working, African-American father took his children to a poetry slam, of all things. For most, finding a dead car late at night would have been a catastrophe. For Jim, it just made the evening more of an adventure.

For several years, he worked every week serving food and respect in a soup kitchen. He was the organizer and leader of his tenants association, in combat with the owners for decent conditions in the building.

Jim’s life template came from his parents, who in addition to their own kids adopted two they had served as foster parents. When Jim’s mother was nearing death, she made him promise never to abandon his adopted brother and sister, and he never did.

The printed program of a memorial organized by his family told of another side of Jim: “He provided years of dedicated service to the Workers World newspaper, which addresses various issues in the United States and around the world.” He was a longtime member of the Workers World supporter program.

A thousand Thursdays, Jim came after work to help mail this newspaper. He always wore headphones behind his ears, thus preserving his eardrums, and was never prevented from carrying on conversations.

One Thursday, an elderly woman admired a shirt Jim was wearing. “When you get through with that shirt, would you give it to me?” He nodded yes. A few minutes later, he reappeared in a white tee and handed her his shirt, factory-folded. This at one time would have been called a happening.

Jim was in the Workers World loft when needed, and out on the streets when needed, so many times, so many ways. One comrade recalled an event from the summer of 1995, when it seemed the state would succeed in murdering Mumia Abu-Jamal. “Our Party went all out to save his life. Jim volunteered to paste up Harlem’s 125th Street. As we started our work, I saw two men in their 70s watching us. Jim’s strong arm never tired during the three hours it took to plaster the most famous street in Black America. When we got back to where we had started, Jim and I shook hands. Across the street, I saw the same two men. They were smiling at us. Maybe they were thinking that’s the way it should be.” A Black man and a white man working together for a just cause.

This world, our beautiful planet threatened with death by capitalism, needs more lovers of life and soldiers for socialism like Jim Ricks. There will be no pretentious corporate or college building bearing his name. His living monument will stand as long as there are people left to tell his stories. He will be remembered with love and admiration by all who shared in the many parts of his life.

Rosemary Neidenberg and Steve Millies collaborated on this article.