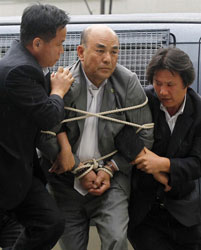 Ro Su-hui is tied up and cuffed by South Korean security officials on July 5.

Washington’s strategy to cement a military alliance of the U.S., Japan and south Korea came unglued on June 29 at the last minute as popular pressure forced the Seoul regime to back out of signing a military intelligence-sharing pact with Tokyo.

The U.S. imperialist ruling class fears China’s rapid economic development. At the core of China’s economy is a system of state ownership and planning set up after the 1949 socialist revolution, though China now allows a growing capitalist market. At the time of the revolution, China had very little modern industry; the vast majority of the people were peasants who barely survived from harvest to harvest. Some 600 million Chinese have been lifted out of poverty since 1981, according to the World Bank, and the Chinese economy is now the second largest in the world. Meanwhile poverty and instability are growing in the Western capitalist countries.

Under the Obama administration, a shift in military strategy has already begun to build more U.S. bases in Asia and move the major part of the U.S. fleet to the Pacific.

Last year, the U.S. conducted joint military maneuvers with Japan and south Korea off the coast of the DPRK and not far from the Chinese mainland.

What the imperialists had not reckoned with, however, was the powerful impact this would have on the Korean people in both south and north, who have suffered terribly from war and foreign domination.

In the north, after the untimely death of Kim Jong Il last December, the new government of Kim Jong Un proceeded to further strengthen the DPRK’s military defenses.

In the south, demonstrations against military collaboration with Japan and the U.S. have been growing ever more militant, despite constant scare-mongering by the Lee regime about the “communist threat” from the north.

Uproar over proposed pact with Japan

The prospect of a military pact with Japan led to an uproar even within the legislature itself, which was formally notified of the deal only one day before it was to be signed.

It was only after the top south Korean “national security” aide considered the architect of the plan, Kim Tae-hyo, was forced to resign on July 5 that the New York Times decided to let its readers know what was really going on in south Korea:

“Mr. Lee’s government had meant the agreement as a limited step toward increasing military ties with Japan, in line with Washington’s desire to bring the two Asian countries closer under a trilateral alliance that could cope more efficiently with North Korea’s growing nuclear and missile threats, as well as with China’s expanding military clout.

“It quickly became apparent, however, that the government had underestimated South Koreans’ misgivings about cooperating militarily with Japan. Mr. Lee’s political opponents quickly seized on that disquiet to begin an election-year offensive, accusing Mr. Lee of kowtowing to Washington and, with various civic groups, likening the conservative governing camp to the past Korean ‘traitors’ who secretly cooperated with Japan’s annexation of the Korean Peninsula in 1910.” (New York Times, July 5)

All Korea was subjected to brutal Japanese colonial rule from 1910 to 1945. An estimated 200,000 Korean women were forced into sexual slavery to “serve” Japanese troops during World War II. Hatred for the colonial oppressors runs very deep in Korea.

The U.S. troopsthat entered southern Korea at the end of World War II effectively divided the south from the north. A guerrilla force led by Kim Il Sung, a Korean communist, aided by the Soviet Union, liberated the north from Japan. In the south, many Koreans who had collaborated with Japan became puppets of the U.S., which also rearmed some Japanese troops to keep the workers and peasants there from throwing out their exploiters and uniting with the socialist forces in the north.

Today, along with mass sentiment in the south against being dragged into a military pact with Japan, there is a strong movement to peacefully reunite Korea.

Resurgence of movement in south

On the same day that Kim Tae-hyo was forced to resign from the Lee government because of his role in the planned military pact with Japan, another south Korean, Ro Su-hui, bravely walked across the heavily militarized border dividing north from south. He was immediately arrested by south Korean officials for having visited the north.

Ro had spent more than three months in the DPRK after entering it on March 24 from China. While there, he had publicly “called for the reunification of the two Koreas and bitterly criticized President Lee Myung-bak of South Korea for his hard-line North Korea policy.” (New York Times, July 5)

Ro, who is 68 years old, faces a possible 10 years in prison for violating south Korea’s anti-communist National Security Law. (Lim Su-kyung, a reunification activist who was jailed under this law after crossing the border in 1989, won a seat in south Korea’s parliament this April — another defeat for the right wing.)

Before Ro crossed into the south, hundreds of north Koreans pressed flowers on him and waved “unity flags.” Two groups met him on the south side of the border: one of hard-liners who called him a “commie” and burned him in effigy, another of supporters who welcomed Ro while calling for repeal of the National Security Law.

The very next day, a south Korean drove his van into the gate of the Japanese Embassy in Seoul.

Washington’s plans for a Washington-Tokyo-Seoul axis in Asia are in big ­trouble.