The U.S. Army was defeated by the Modoc Nation in the Battle of Stronghold 150 years ago on Jan. 17, 1873. The battle took place in the volcanic lava beds of their homelands in today’s northern California.

The Modoc Nation’s original homeland spanned 5,000 square miles across today’s northern California and southern Oregon. It stretched from the Cascade Mountains to the alkali flats of the Sierra Nevada and the Ponderosa pine forests, in the north, to Mount Shasta, the Lassen volcanic lava beds and Medicine Lake volcano range, to the south. The Modoc have lived there for over 14,000 years.

In the 19th century, the Modocs were existing somewhat peacefully with newly invading settlers in the Pacific Northwest — Russian fur traders and later U.S.-sponsored European immigrants. The Oregon Trail cut through Modoc territory, and the U.S. proclaimed “Manifest Destiny” in order to steal the continent from its hundreds of Native nations. The federal government fomented hostility and theft of the lands via settler-militia violence and military force.

Gold was discovered in California in 1849, and the Gold Rush was on. Hundreds of ships full of gold seekers arrived from all over the world. The miners carried out genocidal campaigns to unleash murder, rape and torture against the Native nations of northern California.

The gold seekers’ ships were largely abandoned at the piers; San Francisco slowly built out over them into the Bay. Today, remains of those ships are known to exist under the foundations of the buildings of the financial district and Embarcadero.

California’s new state legislature appropriated half a million dollars for militia campaigns to kill the Native peoples. In her book “Not a Nation of Immigrants: Settler Colonialism, White Supremacy, and a History of Erasure and Exclusion,” Roxanne Dunbar-Ortiz writes: “In a true reign of terror, U.S. occupation and settlement saw the extermination of more than 100,000 California Native people in 25 years, reducing the population to 30,000 by 1870. Described by scholars as the most extreme demographic disaster of all time, it has also been defined as genocide in terms of the Genocide Convention.”

The horde of miners essentially wiped out the huge elk and deer herds in one summer. They so muddied the formerly pristine waterways that the salmon died — thereby also eliminating food sources for the many California Native nations. Settlers killed Native men and, before the Civil War, often sold Native women and children away to Southern enslavers. They stole from and killed Mexican settlers as well.

Nevertheless, the Indigenous peoples, who had been living in peaceful villages fishing, farming and hunting, resisted.

By 1860, six of the army’s seven departments, comprising 183 companies, were deployed west of the Mississippi River. This colonizing army was the principal institution of the settler state in the occupation and theft of the Great Plains, the Southwest and the West. Then, following the Civil War, the U.S. Army deployed against the Modoc Nation with a directive to eliminate its people. 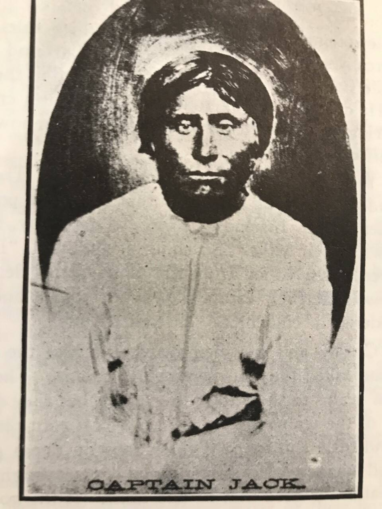 In 1872, many Modocs were forcibly rounded up and moved to a reservation in southern Oregon. Modoc leader Kintpuash, nicknamed Captain Jack, led the resisting Modocs to their ancient stronghold in the volcanic lava beds, which are now known as Lassen Volcanic National Park.

The U.S. Army reassigned General Edward Canby from his role in the occupation of the Carolinas to lead 1,000 troops in an effort to capture the Modocs — but they knew the area, which includes great lava beds or badlands and several volcanic cinder cones. They engaged in guerrilla warfare against the Army for several months.

General Canby, who before the Civil War had participated in the 1835-42 Second Seminole War and the 1846-48 U.S. war against Mexico, met with the Modocs to demand their surrender and refused to negotiate any other terms. The Modocs killed Canby then and there.

By April 1873, the Army finally forced the Modocs out of their stronghold and into flight. The U.S. had spent $500,000 (equal today to $11 million) and had lost 400 soldiers and a general during this struggle. Anti-Native sentiments were whipped into a frenzy in the press. The backlash to the Modoc War resulted in the scattering of Modoc families from Oregon to Oklahoma. Resisters were taken prisoner and hanged, including Kintpuash. His corpse was embalmed and taken on a tour in settler “circuses.”

Yet the descendants of the Modoc resisters survived and today are known as the Pit River Nation.

Workers World Party salutes the historic victory of the Modoc Nation and its history of surviving U.S. genocidal war.

We note that Utopix, a collective of artists and activists in Venezuela, has chosen to feature the Battle of Stronghold for January on its 2023 calendar. For info on the collective, load TWITTER @utopix.cc.