The racist, apartheid government of Israel wasted no time in starting off the new year by murdering two young Palestinian men, while threatening further Zionist settlement expansion in the occupied West Bank.

Israeli forces murdered 22-year-old Mohammad Samer Hoshiyeh and 25-year-old Fouad Mohammad Abed on Jan. 2 in Kufr Dan, a town northwest of Jenin in the West Bank. The killings occurred after Zionist officers raided the community to demolish the homes of two other Palestinians, who had been shot down at a Jamaleh checkpoint last September. 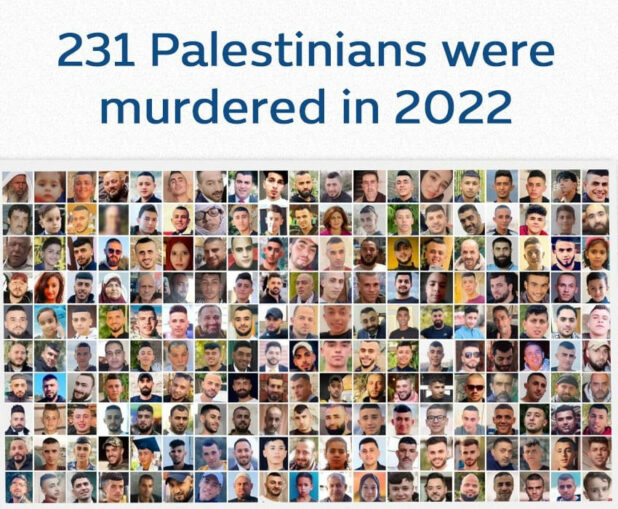 The recent atrocities coincide with promises made by Israeli Prime Minister Benjamin Netanyahu and his new far-right government, formed following the Nov. 1 elections. Netanyahu made several extreme right-wing appointments, including his choice of scandalous ultranationalist Itamar Ben-Gvir as National Security Minister. This reactionary bigot has a sordid track record of espousing violent anti-Arab racism and Islamophobia.

Netanyahu’s new coalition government, which is led by his own Likud Party, as well as segments of the Shas and Religious Zionism Parties, is so right wing that even the corporate media is expressing concern. A USA Today article warned, “The triumph clears the way for Netanyahu to form the most right-wing government in the history of Israel.” (Nov. 2, 2022) In addition to their pledge to enhance settlements in the West Bank, these reactionaries vow to legalize “wildcat” terrorist Zionist settlements.

Netanyahu’s new administration openly embraces plans to discriminate against the LGBTQ+ community throughout the region and will even target Israeli citizens. This is a different approach from that of previous Israeli administrations, including those presided over by Netanyahu. In recent years, the Israeli government would “pinkwash” the settler state by bragging about how “inclusive” the brutal Israeli Defense Forces were, in comparison to the U.S. military!

The United Nations General Assembly conducted a vote on Dec. 30, on asking the International Court of Justice at The Hague to provide an advisory opinion on the legal consequences of Israel’s illegal occupation of the Palestinian territories. The vote overwhelmingly passed, with 87 member countries in favor of adopting the request, including those in the Arab world, Russia and China. The U.S.. Israel and 24 other members voted against it, and 53 countries abstained. (Al Jazeera, Dec. 31)

While this vote came too late, 75 years after the U.N. General Assembly voted to partition Palestine into Jewish and Arab states, despite Palestinian objections, some Palestinians celebrated the recent U.N. vote as a small victory. Nabil Abu Rudeineh, a representative of Palestinian National Authority President Mahmoud Abbas, stated: “The time has come for Israel to be a state subject to law and to be held accountable for its ongoing crimes against our people.” (ndtv.com, Jan. 1)

In retaliation against the U.N. vote, Netanyahu and his bigoted crew arbitrarily proposed a new package of sanctions to further terrorize the Palestinian people. According to the Quds Press, the proposed sanctions include withdrawing VIP cards granted to senior Palestinian Authority officials. These cards give the officials and their immediate family members access to Israeli cities and the right to go through Israeli checkpoints that are off-limits to other Palestinians. (Middle East Monitor, Jan. 2)

As the ultrarightist coalition government of Israel is doubling down on its attack against the Palestinian people, it is important for anti-imperialists in the U.S. to express solidarity with the struggle for their liberation. Now is the time for activists to help organize protests for Palestine and encourage boycotts, divestments and other actions against the Zionist, colonial settler state.