On a sunny afternoon of Jan. 4, a Cambridge cop, accompanied by others also armed with lethal and nonlethal weapons, gunned down and killed 20-year-old Arif Sayed Faisal. By all accounts, after receiving a 911 call about a person in distress and hurting themself, police followed and directly observed Faisal for 15 minutes or more through his own neighborhood before shooting him. 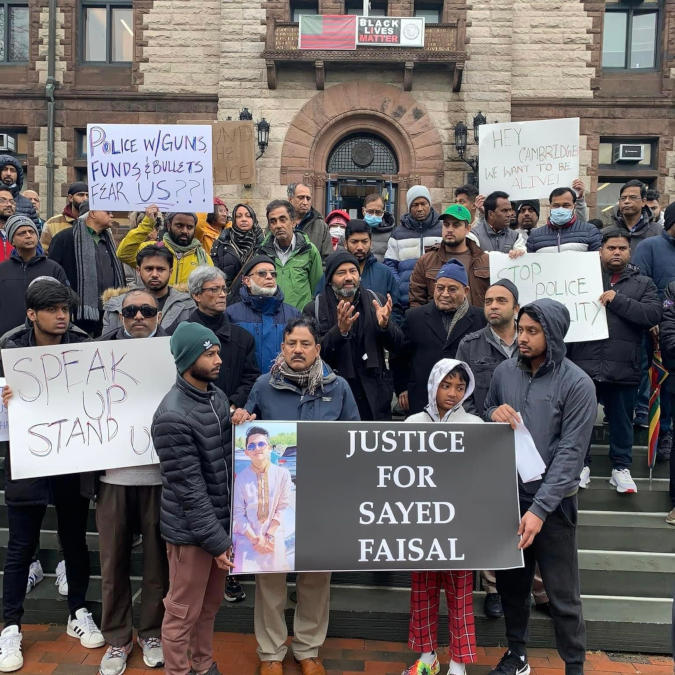 According to statements immediately published by his family and friends, Sayed Faisal was well-known and loved in the Bangladeshi community, 6,000-strong in Cambridge, and in his neighborhood. He was known as a talented computer science student at the University of Massachusetts-Boston, a sensitive artist, athlete and a hard worker at a local CVS.

Reported accounts from the scene, by people who knew him, point to that he was clearly suffering an acute mental health crisis on Jan. 4, apparently trying to harm himself with a kukri, a South Asian utility knife.

The next day, grieving and outraged members of Faisal’s family and leaders of the Bangladesh Association of New England (BANE) protested at Cambridge City Hall, calling for an immediate investigation and police accountability for the killing.

They had a banner reading, “Justice for Sayed Faisal,” held by his father with his beautiful son’s image. The signs they made on site demanded “Stop Police Brutality” and “Police w/ Guns, Funds & Bullets Fear Us??!”

Speaking at the entrance to Cambridge City Hall, Pervin Chowdhury, president of BANE, noted: “This is not the first time that a proud Black body has fallen to the white-supremacist institution, which is the police in this country. We need to keep in mind that the police and the resources they have are not for the protection or security of citizens like you and me. The institution is there to support and protect the institutions of white supremacy and white killings.” (cambridgeday.com)

At a Jan. 6 press conference in the Islamic Society of Boston, BANE General Secretary Tanvir Murad announced a community fundraising appeal for Faisal’s family and his Janazah (gofund.me/eb51085a) and a mass protest at Cambridge City Hall for Jan. 9 at 3:00 p.m.

In the wake of the police lynching of George Floyd on May 25, 2020, Cambridge City Hall was the scene of demonstrations of thousands, then organized by the Black- and women-led FTP (For the People) youth group. Since then, the Cambridge city administration has given 2 ½ years of lip service to FTP’s demand to abolish use of armed cops for mental health events. Cambridge’s Harvard University has funded numerous supportive studies.

The fact is that Faisal’s unwarranted, brutal police killing occurred in the ultramilitarized U.S. police-state, which in 2022 recorded a record number of police killings, of at least 1,176 people or about 100 people a month last year, most of whom were Black and Brown youth. (tinyurl.com/2p96fmj2) This horrible list now includes the liberal bastion of Cambridge.

The Black Response Cambridge organization, in a Jan. 2 statement, called for community solidarity with BANE’s protest and justice for their “community member [who] was murdered by the Cambridge Police Department, while experiencing a mental health crisis. The police were reportedly called to protect this man from harming himself, yet they ended up killing him. Being in crisis should not be a death sentence.” (Twitter @Black_Response).