Several authors of the new book, “Sanctions: A Wrecking Ball in a Global Economy,” discussed the destructive effect of sanctions on over 40 countries in a webinar on Dec. 10. More than 1,000 people registered for the webinar. (View at youtube.com/watch?v=6_ro7VTvOc8.) 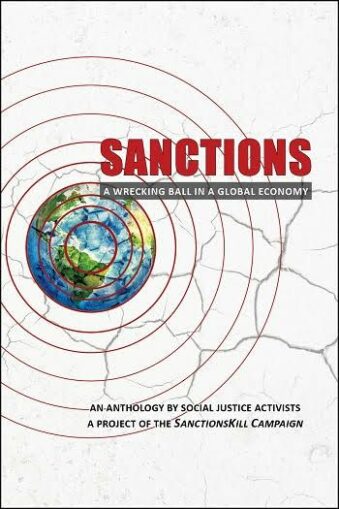 Sara Flounders, contributing editor in Workers World Newspaper, organizer with the International Action Center and co-editor of the book, has visited many of the most vulnerable countries that have been devastated by sanctions: Iraq, Iran, Gaza in occupied Palestine, Lebanon, Sudan, Venezuela, Cuba and Nicaragua.

She said sanctions were the most brutal form of war. Countries lacked basic antibiotics and essential medicines, so that diarrhea or a broken bone was often a death sentence. There was no way to process clean water or pay teachers or medical staff.

Cuba has been heavily sanctioned by the imperialists for 60 years, yet they have supplied more doctors and medical staff to Africa than the World Health Organization. Flounders reported that Cuba had developed its own vaccines, but because of the sanctions, it took a worldwide movement to send enough syringes to immunize its own population.

Lee Siu Hin from the China-U.S. Solidarity Network created a video, “Vaccine and Sanctions,” based on the Sanctions Kill book. He is showing the video throughout China and played a segment during the webinar. The video contains material from “Capitalism on a Ventilator: the impact of COVID-19 in China and the U.S.,” a book he co-authored.

Ajamu Baraka of the Black Alliance for Peace spoke about small developing nations like Cuba and Nicaragua. The U.S. calls them threats to U.S. security in order to justify the use of sanctions, not because they will invade, but because they are an example of commitment to human rights, housing, medical care and clean water.

Other authors who spoke on the webinar were Rick Sterling from the Task Force on the Americas, who said sanctions are against international law, and thousands of people in Venezuela and other countries have died as a result; Judy Bello of UNAC and Syria Support Movement, who spoke on U.S. sanctions causing millions of refugees in the Axis of Resistance of Syria, Iraq and Lebanon; Erica Jung from Nodutdol Korean Community Development, who explained the dual impact of U.S. and U.N. sanctions; Carlos Martinez from the International Manifesto Group and Friends of China, who discussed the U.S./NATO-instigated war in Ukraine; and Ann Garrison, with Pacifica radio and the Black Agenda Report, who described the impact of sanctions on Ethiopia and Eritrea.

As Martin Luther King Jr. so correctly reminded us: “The U.S. is the greatest purveyor of violence in the world.” Since WWII, the U.S. has initiated more than 60 military interventions in foreign countries. The U.S./NATO proxy war in Ukraine brings the U.S. in direct confrontation with a major nuclear power, as does its provocation against China over Taiwan.

It is extremely important that we build a strong, unified antiwar movement that can break through the media propaganda and censorship and end U.S. military aggression around the world.

A week of action to “Stop U.S. Wars” is being called for the Martin Luther King Jr. holiday week, Jan 13-22, 2023, in cities across the U.S. and around the world. Start organizing now and send planned actions to be listed at unacpeace.org.