During the 48 hours from the morning of Nov. 16 to the evening of Nov. 17, four men on death rows in four states — Arizona, Alabama, Oklahoma and Texas — were scheduled to be executed. 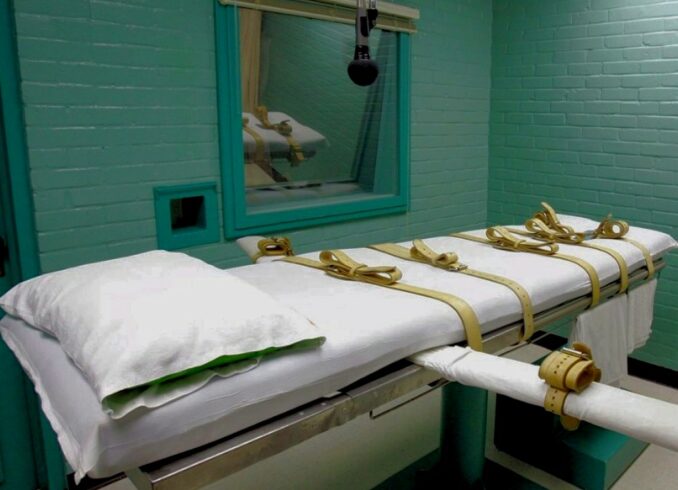 Three did take place, but in Alabama officials stopped the killing of Kenneth Eugene Smith after unsuccessfully searching for a vein to insert the IV for the lethal injection, after trying for 2 ½ hours. This was the second time in two months that Alabama has called off an execution in process.

Texas had better luck with their killing machine the evening before, but not until they had stabbed, poked and tortured Stephen Barbee while trying to find veins for the required two IVs that are used in Texas executions.

Texas now uses two IV lines, because in a past execution where there was only one line, it popped out as the killing was taking place. It squirted those in the room, causing one reporter to pass out and other witnesses to be traumatized. The room was cleared, and another IV was put into place. Witnesses and the media were brought back in, and the execution was carried out.

News media witnesses for Barbee’s execution had entered the death house at 6:00 p.m. Those protesting outside began to get worried when the witnesses didn’t come out between 6:30 and 7:00, as is usually the case.

“Something is wrong, something has happened,” one protester said. “We knew Stephen was disabled and couldn’t straighten out his arms. This should have already been over.” Another protester called the Texas Department of Criminal Justice’s Public Information Office, but they were as puzzled as those demonstrating.

Finally, the media witnesses came out at about 9:45 p.m. Barbee was pronounced dead almost an hour and half after the execution began.

Barbee’s first execution date was scheduled for 2019. It was stopped by the Texas Court of Criminal Appeals to allow an investigation into whether it was a violation of Barbee’s Sixth Amendment right to counsel, when his trial attorney, against Barbee’s wishes, told the jury he was guilty. Apparently, the U.S. Supreme Court considered this to be no problem, and he was again given a date to die.

Temporary halt to executions in Alabama

Since the execution in Alabama had to be stopped Nov. 17, the governor has now called for an investigation into how executions are carried out and ordered the attorney general not to set any more execution dates.

According to the Death Penalty Information Center, legal reform and social justice advocacy groups praised Alabama Gov. Kay Ivey’s decision to undertake a review but expressed concern about the independence and transparency of the process.

In a joint statement, the Southern Poverty Law Center, Alabama Arise and Project Hope to Abolish the Death Penalty said: “Every government program, especially executions, should be transparent from the start. We are relieved that there will be a review and dismayed that our state won’t simply throw out this archaic and unnecessary punishment.

“Among other things, at a minimum this review should assess the toll taken on corrections workers and establish PTSD support for tortured prisoners and corrections officers alike.” (tinyurl.com/45k2kn46)

The aborted execution Nov. 17 was just months after Alabama was accused of “cruel and unusual punishment,” when it spent three hours executing Joe Nathan James on July 28.

“Alabama officials tortured Joe Nathan James to death for over three hours, trying to set up an IV line, and then covered it up. Instead of pausing and investigating how their actions led to what may have been the longest recorded execution in our country’s history, they instead rushed Alan Miller to the execution chamber weeks later and tried to kill him in secret,” said Maya Foa, director of Reprieve U.S.

“Officials knew it was likely they would subject Alan Miller to the very same long and agonizing procedure as Joe Nathan James and Doyle Lee Hamm [whose execution was abandoned in 2018 after prison officials spent 2 ½ hours trying to access his veins], and yet they plowed ahead anyway — adding to the state’s horrific history of botched executions.

“It is hard to see how they can persist with this broken method of execution that keeps going catastrophically wrong, again and again. In its desperation to execute, Alabama is experimenting on prisoners behind closed doors — surely the definition of cruel and unusual punishment,” Foa continued. (tinyurl.com/42yzzvs3)

Gloria Rubac, a resident of Houston, Texas, is a longtime activist and leader in the Texas Death Penalty Abolition Movement.