Workers World honors Indigenous peoples on their commemoration of the 53rd National Day of Mourning Nov. 24, on so-called “Thanksgiving.” On that special day, Native people pay homage to their ancestors and tell their true histories as the original inhabitants of this country, while exposing European colonialists’ massive crimes against Indigenous people, including theft of their lands and food sources, obliteration of their culture, racism, oppression and genocide. 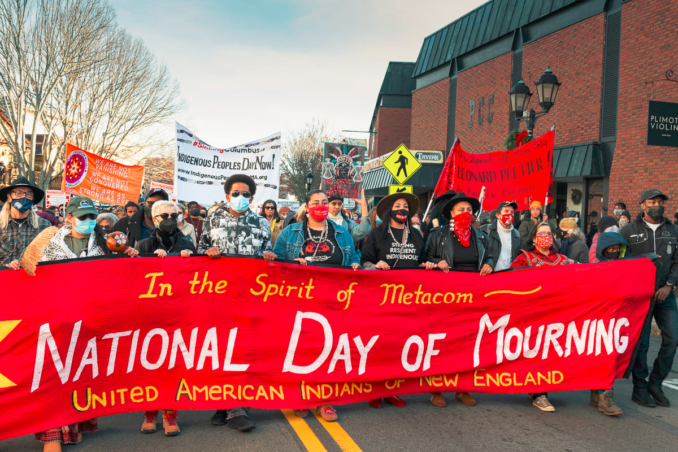 In 1970, the United American Indians of New England gathered in Plymouth, Massachusetts, site of the original “Pilgrim” invasion, and observed the first National Day of Mourning. Only Indigenous people speak at these solemn events.

WW has attended the Day of Mourning commemorations every year since 1981 and has reported firsthand on these events in our pages.

WW applauds Indigenous peoples in the U.S., and globally, who fight oppression and lead struggles to save lands, forests and rivers from capitalist destruction. Our newspaper hails courageous Native water, land and forest protectors who lead these movements, often putting their lives on the line to confront rapacious corporations, which in their reckless drive for profits harm the planet.

We honor those who have lost their lives in these struggles, including Indigenous organizer and Lenca leader, Berta Caceres, of Honduras.

We say “Free Leonard Peltier!” This member of the Turtle Mountain Band of Chippewa Indians has been unjustly imprisoned for over four decades, far from his family and people. Recognized globally as a political prisoner, Peltier has been nominated several times for the Nobel Peace Prize. The U.S. government has violated its own laws by denying parole to this ailing 78-year-old.

WW calls on our readers and supporters to support these movements and commemorate the National Day of Mourning.

Workers World relies on our readers’ backing. The WW Supporter Program was founded 45 years ago to help build this socialist newspaper. Since the early 1990s, the fund has supported the website workers.org, where articles are posted daily and the PDF of the weekly paper is displayed.

Workers.org contains news and analyses of global and U.S. struggles, and is a resource for political activists. Posted at the website are firsthand accounts by writer-activists in many countries, translated by our staff. Timely articles by worker-organizers keep the newspaper current on U.S. union drives, along with reports on anti-racist and other progressive movements.

The pandemic caused us to reduce the number of printed issues to once a month. But the weekly online newspaper has never been skipped during this 2 ½-year health crisis. While WW’s staff is voluntary, the printed issue and the website incur expenses. Although many online publications require payment to read their articles, WW does not. Our articles are free to all readers.

Join the WW Supporter Program. Can you donate $50, $100, $200 or more per year? Contributing $50 or more will entitle you to 12 print issues a year, a pdf of all weekly issues in your email inbox, and, upon request, a copy of the book “What road to socialism?”

By donating to this fund, you can help get class truth to more readers.Write monthly or annual checks to Workers World. Mail them with your name, address and email to Workers World, 147 W. 24th St., 2nd Floor, New York, NY 10011.

We appreciate your support.