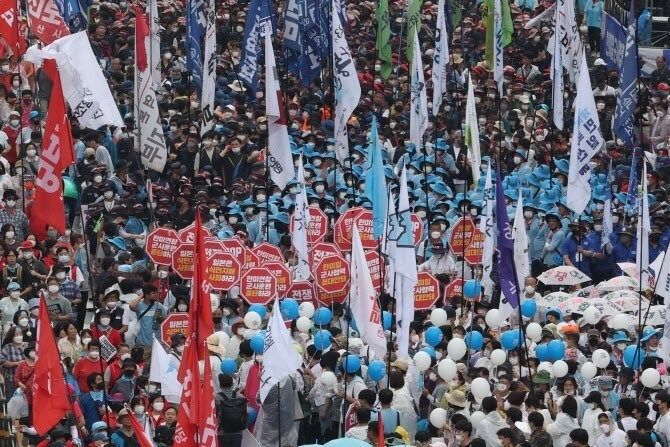 The U.S. media repeatedly reported that “Operation Vigilant Storm” was in retaliation to four missiles fired by North Korea. These joint military drills were the largest in the history of such operations, with a display of about 240 warplanes including F-35B fighters, which conducted some 1,600 sorties.

But more transparent reasons for the joint exercises were published in the Aug. 19 Daily Beast: “The joint exercises between the U.S. and South Korea this month will culminate in a trial run of decapitating the North Korean leadership.” (tinyurl.com/2ujhm5x3)

Ankit Panda of the Carnegie Endowment described how after the drills, Washington will carry out “Korea Massive Punishment and Retaliation,” followed by “climaxing in the decapitation in which special forces snuff the target — one Kim Jong Un — in an intricately choreographed shock strike. Third is air and missile defense.”

The U.S. maintains 73 military bases in South Korea with 28,000 U.S. soldiers, and more than 40 joint military drills take place each year. South Korea is forced to pay for this monstrous occupation, and now that country is being pressured to pay higher costs for hosting these troops.

Every show of force by the Democratic People’s Republic of Korea has been to defend themselves against Washington’s escalating aggression. Pak Jong Chon, a secretary of North Korea’s ruling Workers’ Party, called the U.S. Air Force drills “aggressive and provocative,” aimed at causing a collapse of North Korea. (AP, Nov. 1)

Koreans held a Nov. 4 press conference in Seoul to oppose the latest joint military drills. As Sara Flounders wrote in Workers World in August, “People’s Korea wants peace but has been forced to develop nuclear weapons in order to defend themselves. Despite decades of threats and the harshest economic sanctions, they have refused to surrender.” (workers.org/2022/08/66398/)

China and Russia maintain that Washington’s goal is to change the strategic balance in the region, undermine China’s security interests and worsen tensions. They say the main target of this new Pentagon system is China. Da Zhigang, China’s director of the Institute of Northeast Asian Studies, said, “This is what the U.S. wants to see and is pushing hard for, to turn China’s neighborhood into a powder keg.”

Zhang Jun, China’s representative to the United Nations, said:“The tension on the Korean Peninsula is mainly caused by the U.S. Since North Korea took denuclearization measures in 2018, the U.S. has failed to respond to Pyongyang’s positive measures, failed to address Pyongyang’s legitimate and reasonable concerns and has not shown the due attitude of sincerely resolving the issue. There are a lot of things the U.S. can do, such as easing sanctions in certain areas and stopping joint military exercises.” (Global Times, Nov. 2).

In 2016, when the U.S. first deployed THAAD (the anti-ballistic Terminal High Altitude Area Defense system) in South Korea, farmers and supporters carried out daily anti-THAAD protests, waged a hunger strike and cut their fingers to write in their own blood: “We oppose THAAD with our lives!”

Some parents refused to send their children to school and vowed not to lose the land of their ancestors to THAAD. Then-President Hwang Kyo-ahn was pelted with eggs and water bottles by a crowd of over 3,000, forcing him to retreat into a government building.

This August tens of thousands of protesters chanted “This land is not a U.S. war base.” According to the Korean Policy Institute, they “took direct aim at the heart of U.S. policy in Korea, with signs that read: ‘No war rehearsal! No U.S.’ and ‘No Korea-U.S.-Japan military cooperation.’”

Asia News on Aug. 14 quoted a speaker at an August demonstration who said, “Conservative forces of Yoon Suk Yeol and those in the U.S. are frantically conducting aggressive war drills in sky, land and sea and are about to start large military exercises aimed at the invasion of North Korea. We must stamp out this behavior of anti-reunification forces.”