U.S. Secretary of Labor Marty Walsh, once a building trades union leader, has threatened the 12 unions that represent freight rail workers. Walsh said “failing new negotiated agreements, Congress would have to impose a contract on the unions as a way to keep union members on the job,” according to CNN Nov. 5. “If ‘for some reason [one of the unions] doesn’t get to an agreement with the companies, then . . . Congress will have to take action to avert a strike in our country,’ he said.” 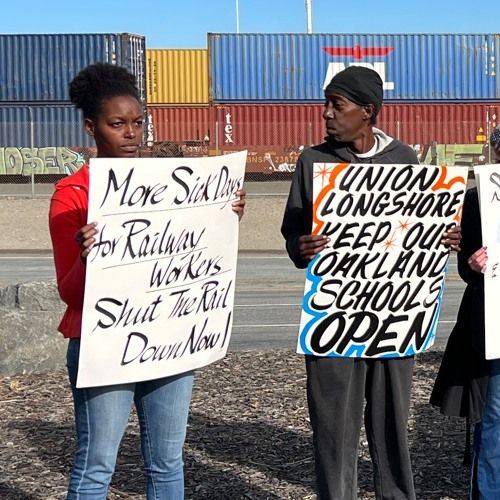 In September, Walsh, President Joe Biden and the Presidential Emergency Board — an optional body under the dispute resolution procedures outlined in the 1926 Railway Labor Act — brokered a tentative agreement between the unions and the National Carriers Conference Committee. The NCCC represents six “Class One” freight rail companies.

The key issues are lack of paid sick time, last-minute scheduling and a ruthless absenteeism procedure. Rail workers often go to work sick and are unable to make or keep medical appointments, which has led to deaths. Excessive overtime has denied workers time with their families.

Two unions, representing 24,000 track workers (BMWED, Teamsters) and 7,000 signallers (BRS) have voted down the agreement so far. The day Walsh made his threatening statement, mechanics represented by the Machinists (IAM) narrowly approved a tentative agreement between the IAM and the companies; an earlier contract was rejected before the PEB announced the multi-union deal. (freightwaves.com)

The largest numbers of rail workers, 62,000 conductors and engineers represented by SMART-TD and BLET, respectively, finish voting around Nov. 20.

The track workers in BMWED could be on strike as early as Nov. 19. If one union strikes, all 12 unions will honor the picket lines.

This scenario has the capitalist class frightened. Roughly 30% of all freight is transported by rail. Over 300 corporate associations, including the American Farm Bureau Federation, Alliance for Automotive Innovation, American Bakers Association, National Retail Federation and U.S. Chamber of Commerce, signed a letter Oct. 28 calling on Biden to prevent a rail strike.

If the White House is unable to avert a strike, both Democrats and Republicans in Congress are prepared to pass legislation to keep railroad workers on the job.

This should shatter any illusions that the Democratic Party is the party of the working class. Walsh — Boston’s former mayor whose March 2021 appointment was cheered by many union leaders — is now acting like an old-fashioned union buster.

Rank-and-file activists call for a “NO” vote

Railroad Workers United, a progressive caucus with members in all 12 unions, held a virtual “solidarity rally” and webinar Nov. 1 that drew over 250 supporters.

Members of BLET, SMART-TD and IAM all echoed RWU’s call for workers to reject the PEB agreement. Gabe Christensen, a SMART-TD member and RWU co-chair, said the contract “didn’t even touch the quality-of-life issues that we have out here. There’s no sick days that were involved in that . . . It’s purely a job-slashing, what was given to the railroads, and it’s going to actually make the quality of life for railroaders worse, because our schedules are going to be even more unpredictable.” (youtube.com/watch?v=7gU-Vj_-IqY)

Rail unions have been trying to negotiate a just contract with the carriers for three years. Their last strike was in 1992; Congress forced them back to work. Since then, the workforce has been systematically cut from 500,000 to 130,000, with trained teams of only two people — which the companies want to reduce to one engineer — operating “mega-monster trains.”

Workers are “doing more work faster,” according to BLET member and RWU co-chair Ross Grooters. At best, the 22% raise offered over five years will barely keep pace with inflation.

Profits have skyrocketed. “Congress should not have to intervene. The railroads should provide paid sick leave to its employees,” BMWED said in a statement. “They have the money to do it, and it literally would cost them a penny of every dollar of record profits to provide it. It’s only 2% of what CSX, NS and UP spent so far this year in stock buybacks. It’s literally nothing to them, yet they refuse to provide it.”

If they strike, rail unions will be taking on the capitalist state apparatus, as well as the freight companies. Unlike the bulk of U.S private sector workers, they are not covered by the 1935 National Labor Relations Act. The Railway Labor Act, passed before the National Labor Relations Act and before the mass labor upsurge of the 1930s, has particular language attempting to limit the ability to strike. Congress can impose the PEB contract or order rail workers to continue working under their current contract.

On the other hand, as speakers on the virtual rally pointed out, the RLA was not impacted by the 1947 Taft-Hartley Act [that makes it unlawful for unions to engage in secondary boycotts]. Rail unions can legally engage in secondary boycotts — such as boycotting the companies that called on Biden and Congress to act as strikebreakers. Amtrak workers could stage sympathy strikes.

There is also the possibility of a West Coast dock strike by some locals of the International Longshore and Warehouse Union. Teamsters President Sean O’Brien and Association of Flight Attendants-CWA President Sara Nelson have held joint rallies promoting the idea of a general strike in transportation.

Railroad workers, even more so in concert with other workers, do have the power to “shut it down!”