Oct. 19 — “Organize! Mobilize! Fightback!” The sound of the tenor drumbeat reverberated up the sweeping staircase and into the corridors of Providence City Hall as the voices of 40 community activists aligned and ascended towards the Mayor’s office. They then held a press conference and speak-out focused on the city’s failure to implement the First Source Ordinance for workers. 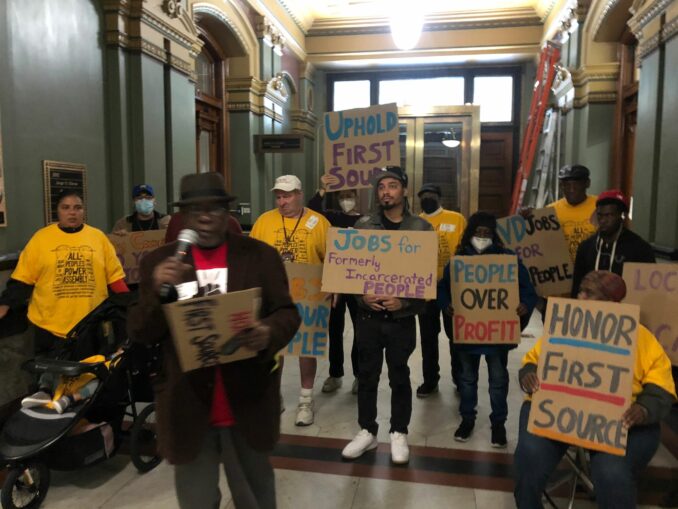 Established in 1986, First Source Ordinance mandates that 100% of new hires by companies that receive $25,000 or more, in city loans, subsidies or tax breaks, and have four or more employees, must be Providence residents.

The activists were united in their determination to expose the rampant failures of the First Source Ordinance and force outgoing Mayor Jorge Elorza and the City Council to implement and increase the funding for the Ordinance. Rhode Island / Massachusetts Solidarity with the Incarcerated Workers Council (SWI) led the action.

For over 30 years, the working-class and poor communities of Providence have not been able to fully access the proposed benefits of the jobs. “I was here in these same halls in 1986 when First Source was introduced to the City Council,” said Calvin Drayton from the George Wiley Center. Multiple speakers at the press conference reiterated that the ordinance has lacked and continues to lack enforcement.

“DARE has been working on this for years . . .” said Anusha Alles from Direct Action for Rights and Equality. “We want job opportunities. And we want housing.”

Rochelle Lee, a longtime community activist and SWI member said. “Like any other program in the city’s purview, we depend on First Source to help people with employment and job opportunities.”

The corporate profiteers who are receiving millions in tax breaks are not complying. The current city council and mayor have been pretending First Source does not exist and are totally neglecting it, despite a court order 10 years ago ordering them to enforce the law.

Community member Luis Muñoz noted: “We talk about equity; we talk about hiring practices, specifically around women and minorities here in the City of Providence . . . [yet] when you look at unemployment rates, they are disproportionately impacting our communities of color. How does the language in the ordinance reflect equity? How does it reflect accountability in terms of the structures that are in place to force developers to hire?”

Ray Two-Hawks Watson of the Narragansett Tribe and Providence Cultural Equity Initiative reiterated a salute to the Providence community and their commitment to keep exposing the systemic failures of prior administrations, by continuing to put pressure on those in political leadership.

The funds for First Source are required to come from corporations who receive tax abatements from the city. In tax year 2010, the City of Providence granted $4.6 million in tax breaks to more than 30 companies. (GoLocalProv.com, April 21, 2011)

Diego Arene-Morely, an independent candidate for a city council seat, pointed out: “Violations of the First Source Ordinance are grounds for removing TSAs [tax stabilization agreements] from the companies that receive them.”

Daniel from the Providence Youth/Student Movement raised alarming truths concerning the crisis and impact of youth unemployment: “Youth are here now and are struggling to find jobs.”

The speak-out and press conference culminated with words from mYia X of SWI, who opened with the chant “All POWER to the people!” and echoed the importance of continuing to build solidarity by bridging alliances, affirming that the people are putting the system on notice!

John Prince, lead organizer with SWI, amped up the drumbeats on his tenor drum outside the door of the Mayor’s office, while reading each of the groups’ demands.

These included immediate enforcement of First Source, with opening of the books providing numbers hired and demographics and a fully accessible website, with a list of weekly updated job openings so people can easily apply. The city must advertise First Source by printing flyers in multiple languages and getting those out across poor and working-class communities.

Finally, the group called on the city to increase the $250,000 allocated to First Source, as that is a 1980s figure and a pittance of what is needed.

“It makes me furious that Mayor Elorza ran on enforcement of First Source, but it was just a dog-and-pony show for him,” stated Prince. “We now call on the new mayor, Brett Smiley, to enforce the First Source Ordinance.”