Six years ago Jun Wang, a Chinese immigrant struggling with schizophrenia and bipolar disorder, was brutally murdered by police in North Royalton, a suburb of Cleveland.

Wang’s sister Julia Rielinger stood a few feet away when North Royalton Police Department officer Kip McDonald shot her brother, after he had already been shot and was handcuffed. McDonald and officer Jason Kimmel were assigned to assist in carrying out a probate court order to transport Wang to the hospital, but instead Kimmel canceled the call to the Emergency Medical Service. 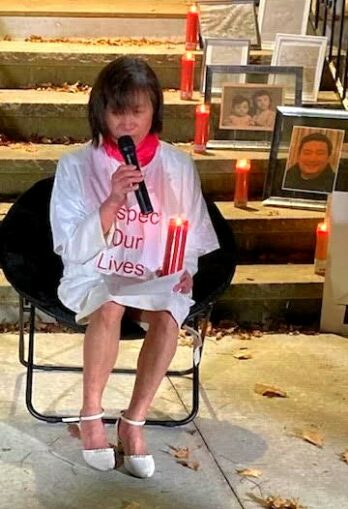 The Jun Wang Foundation marked the anniversary of Wang’s execution Oct. 28 with a rally and vigil near the NRPD headquarters. Cleveland area activists spoke, including members of the Wang Foundation, Northeast Ohio Coalition for the Homeless, Greater Cleveland Immigrant Support Network and the American Indian Movement, as well as a supportive minister and people who have lost loved ones to police violence.

Rielinger described the painful experience of Wang’s murder, where she was locked in a squad car by herself during the 30 minutes it took EMS to arrive. Had they arrived sooner, her brother’s life might have been saved. “Mental illness is not a crime” was one of the main themes of the vigil, which demanded McDonald and Kimmel be fired.

Rielinger has found strength and support from others in the Cleveland area who have lost loved ones to police violence, especially Samaria Rice — the mother of 12-year-old Tamir Rice, killed by Cleveland cops in 2014. Along with other members of her family, Rielinger attended a protest Oct. 22 in the suburb of Maple Heights with the family of 22-year-old Datwuan Catchings. Maple Heights police killed Catchings May 30.

The Cuyahoga River divides Greater Cleveland between the predominantly African American East Side, where Maple Heights is located, and the West Side, which includes North Royalton. But communities on both sides of the river, in the city and the suburbs, are uniting to stop police lynchings.