Protesters clashed with the police in numerous cities, as 300,000 workers participated in a partial general strike in France Oct. 18 and courageously took to the streets throughout the country. 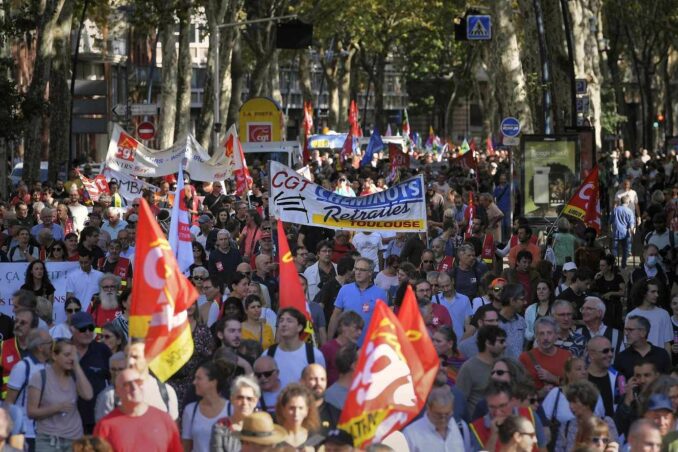 Picketers carried signs addressing inflation, climate change and pension “reform,” French President Emmanuel Macron’s proposed reduction of benefits and increase in contributions workers have to pay for their pensions. Workers in France are facing a cost-of-living crisis and soaring inflation; at the same time, energy firms are raking in record profits. This has caused widespread anger and has led to calls for a windfall tax on energy companies.

Several socialist organizations participated in the events. The revolutionary Pole of Communist Revival in France reflected on its website, Initiative Communiste: “The mobilization this Oct. 18, 2022, for this day of strike for wages and the defense of the right to strike at the call of a broad inter-union united front was important. It was unquestionably stronger than the action last Sept. 29, which was already successful. It benefited from the impetus provided by the heroic mobilization of the refinery workers who, through their powerful strike, have reimposed the general wage increase as the number-one political and trade union issue on the agenda.”

The one-day general strike occurred just as oil refinery workers at several depots owned by the corporate oil giants ExxonMobil and TotalEnergies, formerly known as Total Fina, had been on strike for over a month. Many of the striking oil workers, who have been conducting militant blockades, belong to CGT and voted in early October to continue their strike, despite government threats of criminal charges if they refuse orders to go back to work.

The CGT is demanding a 10% wage increase for oil workers, pointing out that the corporations are making windfall profits, while workers struggle to pay bills as prices rise.

The secretary general of the CGT, Philippe Martinez, told the French Marxist publication L’Humanité Oct. 14: “The CGT has been calling for negotiations on wages for several weeks, and neither Total’s management nor the government has seen fit to respond. It took an outbreak of conflict, whose impact the administration minimized at first, claiming that there was no supply problem — and finally it woke up.”

Workers at all but two of the TotalEnergies facilities settled and went back to work Oct. 20 — two days after the general strike.

Despite the capitalist bosses, their government and their media attempting to blame striking workers for transportation delays and rising energy costs, the working and oppressed people of France flexed their muscles through collective action.