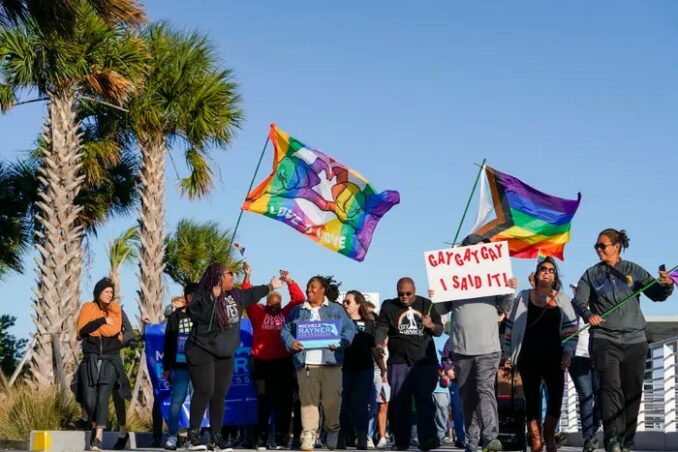 Ultra-right wingers are once again trying to gain political power in the U.S. on the backs of queer and oppressed people. In March — to bolster a run for president — neofascist Florida Gov. Ron DeSantis signed the infamous “Don’t Say Gay” bill to prohibit discussion of sexual orientation or gender identity in public schools. (“Protest at the Piers,” Workers World, June 16)

Note that prohibited sexual topics are those which deviate from narrow heterosexual, male-dominated, conservative Christian beliefs about what kind of gender and what kind of sexuality is “moral” or “normal.” Note that proposed law flies in the face of both scientific and historical evidence about the broad and natural range of human sexuality and gender.

And this bill conveniently ignores the sexual abuses committed by heterosexual lawmakers and preachers — from former President Donald Trump to Southern Baptist ministers. Not to mention the fact that child sexual abuse and rape is typically committed by male relatives or friends within the traditional heterosexual family structure. Or that the most frequent cause of death for pregnant women is overwhelmingly violence at the hands of their (almost always) male current or former partners.

The queer-baiting tactic is familiar and old: Point at LGBTQ2S+ people as the danger to children; rack up votes — and ignore firearms, poverty, racism, ableism and environmental hazards as the serious threats to children.

Those of us in LGBTQ2S+ communities have lived through vicious targeting before — many, many times. When we dare to live openly in our gender and sexuality, we are condemned as “unnatural” and punished — as this writer was in 1976, when the state of North Carolina took away my children because I openly claimed my life as a lesbian.

Many have heard of the infamous anti-gay 1977 “Save Our Children” campaign, fronted by ex-Miss America competitor Anita Bryant and financed by Florida orange growers and big business.

But Florida also had the 1956 Johns Committee, dedicated to rooting out queer people, communists and civil rights activists. This legislative inquisition questioned hundreds of people and investigated a “homosexual menace” at Florida State University, where as a result faculty and staff were fired and students fled the campus in fear. Those targeted had been active in organizing support for the Black Civil Rights Movement.

In 1964, the committee published its infamous purple-covered pamphlet “to prepare . . . children to meet the temptations of homosexuality, lurking today in the vicinity of nearly every institution of learning.” (Leslie Feinberg, “Civil rights activists were gay-baited, red-baited,” Lavender & Red 55, workers.org)

The bill recently introduced by Republicans is one moment out of thousands and thousands of horrific instances in the last century of baiting and torture of LGBTQ2S+ people — where we have lost our jobs, our homes, our friends, our families, our children and sometimes our lives.

In a parallel to the 1980s attacks on explicit public information about HIV/AIDS, “sexually oriented material” is defined as anything about LGBTQ2S+ people.

A new twist is parents would be given the right to sue in “bounty lawsuits” for any acknowledgments of LGBTQ2S+ people — for instance, against a pediatric hospital that put a Pride flag on a medical pamphlet about counseling.

The chances of the bill passing in a Democratic-majority Congress are nonexistent at the moment, but the fear the bill raises is real.

Mass mobilization has beaten back such attacks in the past, including the horrifying 1978 Briggs Initiative, officially California Proposition 6, which sought to ban lesbians and gay men from working in the state’s public schools. The rationale? Once again, the outrageously false claim that we pose a danger to children.

Instead, under the slogan “We Are Everywhere,” LGBTQ+ people went door to door and everywhere in their communities to come out and affirm our daily, ordinary and extraordinary worth. The amendment was roundly defeated at the polls.

Now LGBTQ2S+ people have made a world where we are visible all the time, in all places, in all roles and have won laws and public acceptance for our lives.

Now the challenge is to continue to organize on a mass level to defeat this new neofascist scapegoating “Save the Children” campaign.

We can win a chance for all people, including children, to have access to the facts and glory of our LGBTQ2S+ lives — and to the knowledge that queer life is one path among many that can be taken toward the future.