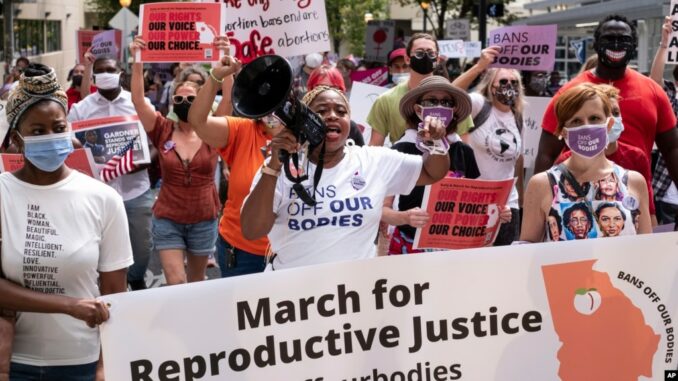 Over the weekend of Oct. 7-9 during demonstrations calling for reproductive justice, chants included “vote them out” and “Roe, Roe, Roe your vote.” These chants were led by Women’s March organizers trying to channel the militant energy of young activists into working to elect Democratic Party candidates.

Understandably, millions of women, gender-oppressed people and allies will take part in the Nov. 8 election with the goal of defeating right-wing, misogynist and fascist politicians. In some states there are referenda on whether or not to enshrine abortion rights in state law. Many people, newly registered, will be voting for the first time.

But is a purely electoral strategy enough to restore and secure the right to abortion access — recently overturned by the U.S. Supreme Court? Or to protect the right to be safe from racist killer cops; the rights to a job, education, housing and health care; the right to be represented by a union; or even the basic right to vote? Will electing Democrats guarantee any of our rights currently under siege?

We take a Marxist view of the capitalist state, which the so-called “two-party system” is designed to uphold. Our view corresponds to that of the great revolutionary leader V.I. Lenin, who explained in “The State and Revolution” that “To decide once every few years which members of the ruling class is to repress and crush the people through parliament [or in our case Congress and state governments] — this is the real essence of bourgeois parliamentarism, not only in parliamentary-constitutional monarchies, but also in the most democratic republics.”

We would find common ground with Malcolm X, who, in the historic speech “The Ballot or the Bullet,” said Black people were “the victims of democracy, nothing but disguised hypocrisy.”

At that time the Democratic Party controlled the Senate, the House of Representatives and the White House — Malcolm X referred to President Lyndon Johnson of Texas as “a Southern cracker.” The party was home to white-supremacist, segregationist Southern “Dixiecrats.” At that moment the Civil Rights Act was subject to a filibuster by members of both parties.

Lenin was writing in 1917, and Malcolm X was speaking in 1964, but their words ring true today.

It’s not hard to dispel the myth that the Democratic Party is the party of working-class and oppressed people. At the local level, it’s often Democratic-led city governments and courts that act to strengthen the repressive state apparatus — draining city budgets by spending money on jails and new equipment for the police, while declining to act against violent cops.

At the federal level, Democratic elected officials uphold the role of U.S. imperialism as the police of the world, handing over trillions of dollars to the Pentagon and most recently funding the war in Ukraine. The “most pro-union” President Joe Biden, Secretary of Labor Marty Walsh and Biden’s appointees to the National Labor Relations Board have failed to block the blatant union-busting by Amazon, Starbucks and other big corporations.

As far as abortion rights go, it’s worth remembering that former President Jimmy Carter signed the Hyde Amendment, which denied coverage for abortions to low-income pregnant people on Medicaid. Reproductive rights activists say: “It’s time to repeal the Hyde Amendment” — but how long must we wait for some Democratic officials in Washington to accept the challenge?

Voting will not fundamentally alter the balance of power under the capitalist system of exploitation. Every gain that workers and oppressed people have made has been through class struggle. That has been and will remain true, regardless of who gets elected Nov. 8.

Want change? Organize and fight for it!