After years of intense discussion, debate and an on-the-ground, neighborhood-by-neighborhood democratic process, the people of Cuba have passed a new Family Code. The provisions of this “Code of Affections,” as it is familiarly known, are progressive, revolutionary and honor the reality of the wide range of families that people are creating in defiance of patriarchal capitalism. 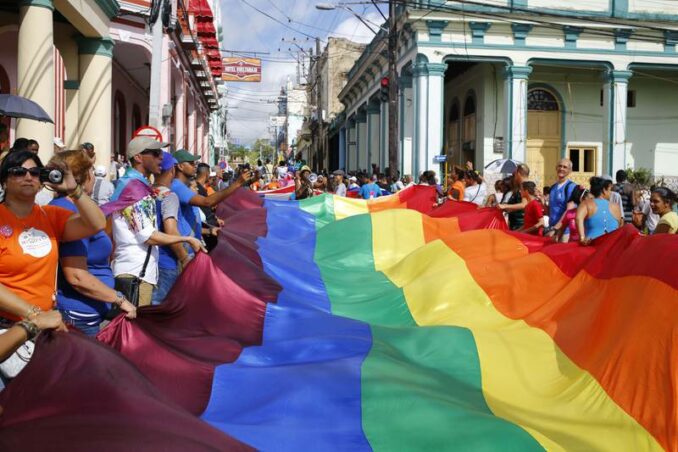 Members of the LGBT community carry a giant pride flag during the parade marking the country’s International Day Against Homophobia, Transphobia and Biphobia, in Pinar Del Rio, Cuba, May 17, 2018.

People have formed all manner of different family configurations throughout history. But under modern-day capitalism, until very recently only one type — the male-dominated, female-compliant heterosexual marriage — has been given legal, state sanction.

Recently some headway has been made internationally, including in the U.S., to legally sanction paired same-sex unions and grant adoption rights to those couples. Though this accommodation has been made based on the fact this “new” kind of family parallels the paired heterosexual norm, marriage equality in the U.S. may now again be under threat, given the rise of protofascist efforts in many states and the current makeup of the U.S. Supreme Court.

Now Cuba has heroically enlarged the world’s understanding of what a socialist vision of marriage and family can be. The new Code of Families generously embraces the many varied and actual familial structures that human beings create in order to love, shelter, protect and nurture themselves and their children.

The new Code legalizes same-sex marriage, allows same-sex couples to adopt children, promotes equal sharing of domestic responsibilities and extends labor rights (including pay) to those who care full time for children, the elderly or people with disabilities. The Code confirms the right to free abortion, paid family leave and assisted and surrogate pregnancies (but not for profit). It fights gender-based violence and expands the rights of children and grandparents. 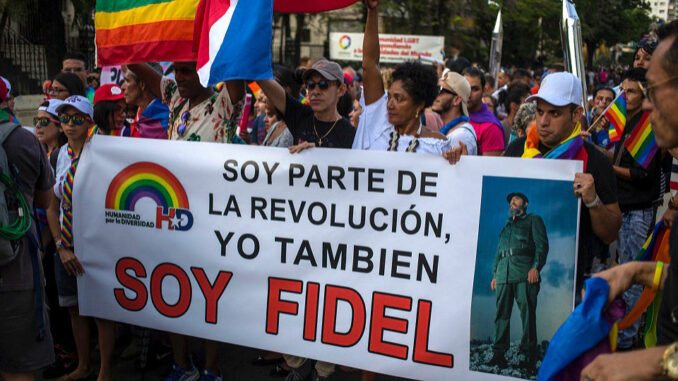 In the annual LGBT pride parade in Havana, Cuba, marchers carry
a banner that reads in Spanish: “I am part of the revolution — I also am Fidel,” a chant widespread in the country after the Commandante’s death in 2016.

The new Code replaces the concept of “parental authority” with that of “parental responsibility.” Luis Palenzuela Paez, a Civil and Family Law expert and member of the working group drafting the new Code, stressed that the concept of parental authority originated in the “pater familia” of the Roman family, who held the power and legal right of life and death over the members of his family, which included his wife, children and enslaved people.

With deliberation, the new Family Code embeds in its articles such principles as “gender equality, the obligation of parents to provide their children with emotional stability and to contribute to the free development of their personality, based on their capacities, aptitudes and vocation.” (Granma, Sept. 20)

A resounding win for the people of Cuba

The vote culminated a years-long democratic process among the Cuban people to update the 1975 Family Code, which codified gender equality in law. Mandated by a new Constitution passed in 2019, multiple versions were drafted and sent to the National Assembly for People’s Power in 2021, which approved a draft to be submitted to the Cuban people for discussion and debate.

Between February and April of this year, nearly 6.5 million Cubans took part in more than 79,000 meetings facilitated by the Federation of Cuban Women, the Committees to Defend the Revolution and other community organizations. These meetings offered proposals and amendments to the working draft of the proposed Code. Over 400,000 proposals were offered by the people; these were submitted to the National Assembly of People’s Power for evaluation, and a revised draft returned to the people again for further discussion and proposals.

After reviewing all proposals and revisions, the National Assembly voted on the 25th version of the Code submitted, unanimously approving that and sending it to the referendum vote.

Unlike in the U.S., where reactionaries in state after state are making it more difficult for people of color and poor and working people to vote, all Cuban citizens and residents are automatically registered to vote at age 16 and were able to cast a ballot in the referendum, if they chose to do so.

The new Code establishes the right of all Cubans to form a family, regardless of sex or gender identity. A variety of family forms are recognized, including multiparental families and allowing parental rights to be shared among an extended and nontraditional family that could include grandparents, stepparents and surrogate mothers.

The new Code strengthens the right to free and safe abortion in a hospital or clinic for all Cubans. In the U.S. the right to reproductive choice, reproductive health and maternal health is being eliminated, severely restricted or undermined.

Noteworthy in the new Family Code is defense of people with disabilities in matters of relationships and family. Caridad del Carmen Valdés Díaz, professor of law at the University of Havana, said, “The changes included in the Family Code seek to provide the people with motor, sensory or psychic disabilities with the possibility of exercising their rights as any other person, in absolute equality.” (Granma, Sept. 5)

Cuban Minister of Justice Oscar Silvera Martinez emphasized that the law “is more solid because it is impregnated with popular sovereignty, revolutionary essence, protection of rights and a high human value . . . and does not regulate rigid or preestablished family models but, instead, favors everyone having access to the protection of institutions of a family nature.” (Telesur, Aug. 18)

Ultraright opposition fomented in the U.S.

On the island there was some right-wing opposition to the Code based on conservative religious beliefs. Contrary to anti-communist stereotypes, religious bodies, including the Catholic church, are not forbidden in Cuba; they simply are not allowed to set political principles for the country.

After casting his vote in the referendum, President Miguel Mario Díaz-Canel said: “There are people who, by faith or creed, have not understood that the Code doesn’t deny the type of family they defend, but rather gives guarantees for other types of families.” (Resumen Latinoamericano-US, Sept. 26)

More insidious was the neofascist campaign against the Family Code organized from the U.S. on social networks and right-wing media. The aim was to incite Cubans to vote “no” using the argument that supporting the bill means supporting the Cuban government.

Díaz-Canel clarified: “It is not a problem of convictions, reasoning or feelings; there are people who adopt that position because they consider that, if it is a Code within the Revolution, then it should not be approved.”

Cubans — in defiance of anti-communist propaganda and the very real hardships of the U.S. blockade — once more have proved that they never stop searching for justice, and they never stop “making the Revolution.”

Bill Sacks, an organizer and participant with the Venceremos Brigade, breaking the travel blockade for over 50 years, contributed extensively to this article. In 1975 Pratt lost custody of her two young children under the anti-LGBTQ+ “crime against nature” law in North Carolina.