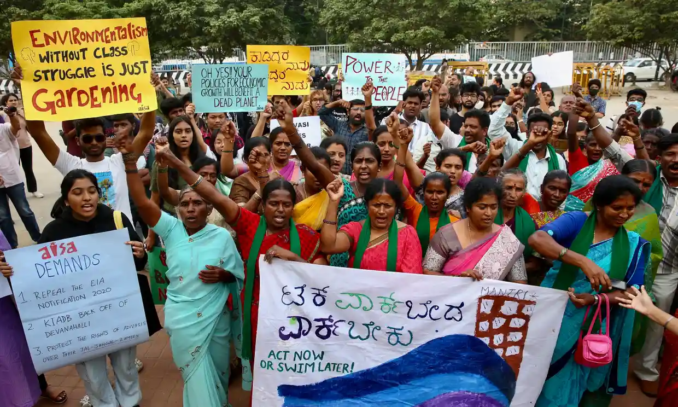 Climate strikers in Bengaluru, India, one of 450 global locations, were among hundreds of thousands demanding “climate reparations and justice” Sept. 23. Young people in Asia, Africa and Europe joined a coordinated Global Climate Strike that called for wealthy countries to pay reparations to poorer countries that have been the hardest hit by the disasters caused by global warming.

Youth walked out of schools, colleges and workplaces in 100 countries from New Zealand and South Korea to Italy, Germany and the Democratic Republic of Congo. In Kinshasa, the DRC’s capital, the main demand was “Act for Africa, protect our planet!” Some 20,000 German youth in Berlin, demanded their government establish a 100 billion Euro fund to meet the climate catastrophe. (Guardian, Sept. 23)

Coordinator of the protests, Fridays for Future, said at its website: “Colonizers and capitalists are at the core of every system of oppression that has caused the climate crisis” and called for “decolonization, using the tool of climate reparations.” It says demands must be met from “Indigenous, Black, anti-patriarchal and diverse marginalized communities to get their lands back, giving resources to communities most affected by the climate crisis.”

The statement recognizes that “climate struggle is class struggle” and said that for years, “the ruling class, primarily through corporations and governments from the Global North . . . have exercised their power, gained through colonialism, capitalism, patriarchy, white supremacy and exploitation, to destroy the Earth and its occupants with no remorse.  They deliberately sacrifice the Global South’s ecosystems and peoples for their ‘economic growth.’”

It concludes, “The richest capitalist 1% must be held responsible for their actions. Their profit is our death and suffering.” The coalition calls for people’s power, led by the most marginalized.

The struggle against the climate disaster must be aimed at the capitalists who ravage the earth in search of superprofits with no concern for its inhabitants or for the planet’s well-being. Fighting for reparations is an excellent goal, but ultimately there must be a concerted global effort to oust capitalism and build a socialist world, which is the only way to ensure the preservation of the Earth and every living being on it.