Residents of the University City Townhomes and their supporters, determined to save their homes from destruction by property developers, have taken their fight directly to the movers and shakers behind most gentrification in Philadelphia.

Over 100 residents and supporters converged on the University of Pennsylvania convocation for the incoming class of 2026, Aug. 29, shouting down President Liz Magill with chants of “Housing is a human right” and “Stop Penntrification.” Protesters then used the occasion to educate students about UPenn’s racist history in the destruction of a major Black Philadelphia neighborhood.

On Sept. 7, hundreds of protesters crashed the 2022 annual reception and fundraiser for the Building Industry Association of Philadelphia (BIAP) Political Action Committee, described as an “evening of networking with members of the Philadelphia City Council and the Pennsylvania General Assembly.” The private event, held at the Pennsylvania Academy of the Fine Arts (PAFA), was attended by dozens of bankers, real estate developers and gentrifiers. With ticket prices starting at $250 for non-BIAP members, no workers or low-income residents were expected on the guest list.

When building guards tried to stop demonstrators from getting on elevators to reach the party on the 11th floor, many climbed flights of stairs in defiance.

BIAP is the most powerful development PAC in Philadelphia. The for-profit developers of “low-income housing” lobby and monopolize state and city money in the name of protecting Black and Brown communities, without seeking input from residents. The Land Bank purchases delinquent properties in low-income communities, then hands them off for pennies to the developers who convert them to middle-income housing. Since this PAC has been active in Philadelphia, the number of available affordable low-income units has drastically declined. 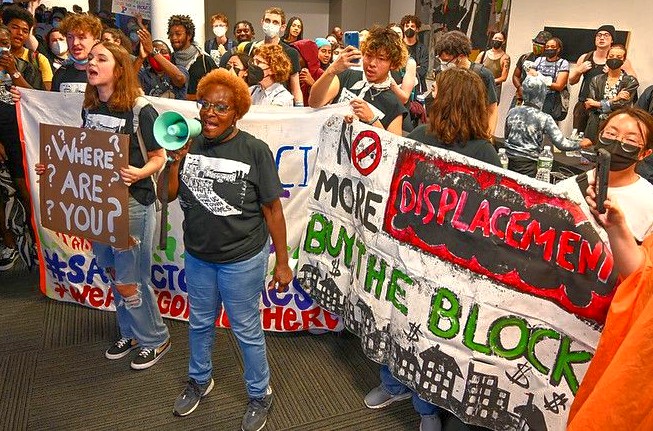 City Controller Rebecca Rhynhart was seen fleeing the event as demonstrators entered the room. Councilmember Kendra Brooks, who ran for office on the Working Families Party ticket, hightailed it to an outside patio, glass in hand, to avoid the protesters who shouted, “Hey Kendra, we have some working families out here.”

Brooks was one of the City Council members the UC Townhomes residents’ council met with earlier in the week seeking support for the city to buy the property. On Sept. 8, Brooks, along with Councilmembers Helen Gym and Jamie Gauthier, whose district includes the townhomes, released a previously prepared statement calling for a one-year extension of the federal contract between Altman Group and Housing and Urban Development (HUD).

The council members call for the city to commit funds to preserve affordable housing and for state and federal matching funds. UC Townhomes residents are demanding that public officials stand up to greedy developers and purchase the property from Altman. There is precedent for this. Recently University Square Plaza, a residence for elderly and disabled people across the street from UC Townhomes, was preserved with local government funds when the owners’ contract with HUD expired.

UC Townhomes, called “the People’s Townhomes” by residents, is owned by developer Brett Altman, who was a prior president of the BIAP. Altman has refused to meet directly with residents, who initially expected to be evicted Sept. 7. They only learned from media sources that the date had been extended to Oct. 8.

To mark this partial victory residents and supporters held a press conference and rally of over 300 people outside City Hall earlier in the evening, before marching to PAFA.

Several residents voiced their determination to remain in their homes. They are demanding that the City of Philadelphia buy the block where the 70 homes, housing over 400 residents, are located. Resident Sheldon Davids stated: “We stopped the sale of the property to a commercial buyer. This was a victory. Now we have a plan for the city to purchase and preserve the property.” 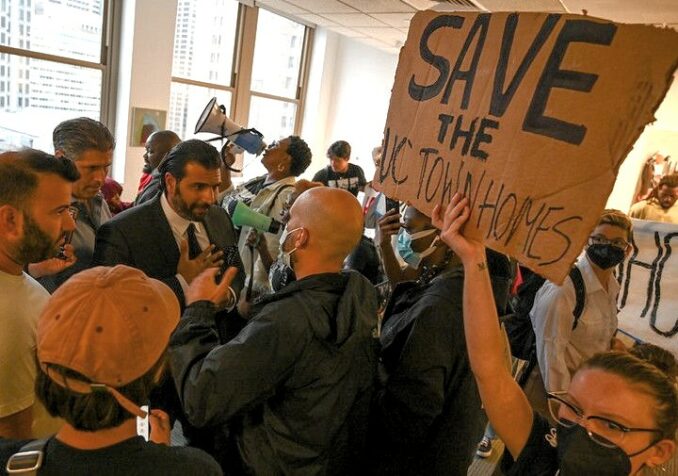 Resident Rasheeda Alexander read the residents’ demands which include “stopping outside investors and developers who are buying up our neighborhoods and pushing up prices for Philadelphia families.” They are calling on Altman Group to extend their contract with HUD for two years.

Other speakers included resident Mel Hairston and Workers World Party member Mike Wilson, who both laid the blame for the housing crisis directly on the profit-driven system of capitalism. Hairston stated: “Serial killers in suits are largely responsible for the destruction in our neighborhoods. There’s a war going on right now. They want to bring the war to the people? We bringing it right back to them.

“We are taking back what is ours by storm. Right now, we are taking the streets over and shutting them down. It is us versus capitalism. Build a worker’s world!”

Behind colorful banners and chanting: “Our city is not for sale, so we ain’t going nowhere!” demonstrators circled City Hall before marching to the surprise confrontation with developers.

A video of the protests on Sept. 7 is available at tinyurl.com/3bmed3md.