Just imagine if the Joe Biden administration and Congress had agreed to spend $54 billion to advance health care in the U.S. as COVID-19 variants continued to claim more lives. Instead of life expectancy dropping for the second year in a row, more lives would have been saved.

That $54 billion would not cover the cost of a national health care system – but it would be a start. Instead, the Biden administration allocated this money to buy weapons systems to expand the war in Ukraine. Another $813 billion was spent on the Pentagon. Funding and expanding the permanent war economy, with more threats against both Russia and China, has been Biden’s priority since taking office.

Now the average U.S. life expectancy based on 2021 data is just 76.1 years — the lowest that life expectancy has been since 1996. It is the biggest decline — 2.7 years in total — in almost 100 years, since the start of the so-called “Spanish Flu” in 1918 — which actually started with U.S. soldiers being mustered in Kansas for WWI.

For people of color the numbers are more dire. For Black people, average life expectancy dropped to 75.4 years. Since 2019 Indigenous people and Alaska Natives experienced a drop in life expectancy from 71.8 to 65.2 years. 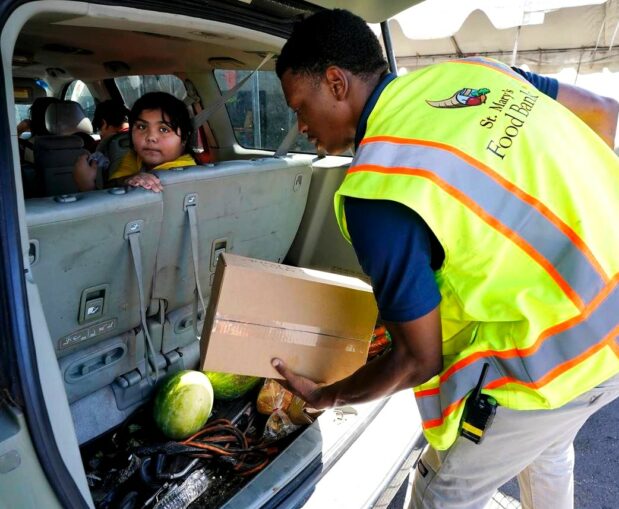 There are long lines as families seek out food banks throughout the U.S., here in Phoenix, Arizona, June 29.

Deaths from COVID-19 and increasing numbers of people dying from overdoses are recognized as the primary causes of the declines. Deaths from accidents and unintentional deaths are a significant factor; according to the National Center for Health Statistics, many stemmed from drug overdoses.

On Sept. 2, the Biden administration stopped providing the $15 billion needed for the COVID-19 free home tests program, increasing the risk for broader COVID-19 spread and the financial burden of testing on poor and working people.

For the capitalist country considered the most developed on the globe, this is quite an indictment. The U.S. remains the only major capitalist country to fail to provide health care to the masses — millions of whom are uninsured.

Measurements of a society’s ability to provide an equitable standard of living include provisions for health care, housing, employment with livable wages, nutritious food, education and environmental security. Even before the COVID-19 pandemic emerged in early 2020, the U.S. capitalist economy was proving inadequate on all these measures.

The minimum wage has remained stagnant since the early 1980s. Efforts to secure a national health care system have failed repeatedly. Now national measurements of students’ performances in reading and math have experienced a dramatic drop, according to a study released last week. The National Assessment of Educational Progress that tests 9-year-old students found scores fell more than they have in 30 years.

Again, the COVID-19 pandemic, which made in-person learning impossible for most students during 2020 and 2021, can be faulted. But other factors contribute to the crisis in education in the U.S., including a historic shortage of qualified teachers willing to return to classrooms after their experiences during the pandemic.

An estimated 1 in 4 teachers have left the system, creating a catastrophic teacher shortage. In many school districts, hundreds to thousands of teaching positions remained unfilled when schools recently opened. Several school districts report being unable to open classrooms. In Philadelphia, two charter schools announced they were closing just as the new school year began, leaving hundreds of families scrambling.

On top of pandemic-induced teacher exhaustion, low pay and inadequate school funding, many districts are encountering an escalating political culture war, as state politicians and local school boards pass policies restricting what teachers can say about U.S. history, race, racism, gender and sexual orientation and LGBTQ+ issues. Many teachers are leaving their jobs because they refuse to comply with these white-supremacist directives.

The link between drops in life expectancy and lower student test scores is more complicated than just the COVID-19 pandemic. The U.S. capitalist system continues to value profits above human life and maintains its historic stranglehold over workers and oppressed peoples through systemic white supremacy. It must be smashed and replaced with a socialist system based on human needs where health care, housing, education and living wages are prioritized. The future of humankind depends on this.