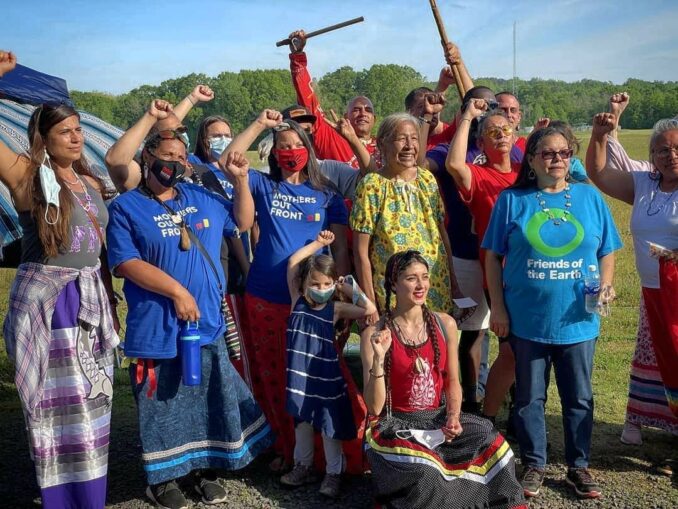 After an Aug. 7 Senate passage, the “Inflation Reduction Act” (IRA) passed the U.S. House of Representatives Aug. 12, and President Joe Biden signed it into law Aug. 16.

The IRA, disingenuously referred to as “the Climate Bill,” is an omnibus bill that encompasses some parts of the previous Democratic Party-proposed “Build Back Better” bill and has provisions to reduce carbon emissions by roughly 40% by 2030. It is being touted as “historic” by Democratic politicians, corporate media pundits, moderates and even some “progressives.”

The bill is supported by the arch reactionary Democratic Senator from West Virginia, Joe Manchin. An Aug. 4 Workers World article, “Manchin bill could worsen climate crisis,” pointed out: “Among its key provisions are generous tax credits for technologies like carbon capture and storage and low-emissions hydrogen fuels.”

A major concern for many in this region is how the bill may allow for completion of the controversial Mountain Valley Pipeline (MVP), a 303-mile pipeline designed to go from northwest West Virginia to southwest Virginia and then to a delivery point in North Carolina. The pipeline would carry gas that is fracked from the Marcellus and Utica Shales.

Sen. Manchin has prevented the passage of climate justice legislation in the past, because he is a well-funded puppet of union-busting coal companies, along with the oil and gas fracking industry. Provisions Manchin had added to the IRA could make it easier for MVP to be built through “eminent domain.” This allows the state to legally displace people for “public use,” and in this case, a pipeline would be designated for “public use.”

As a result of Manchin’s intervention, the final draft of the IRA received glowing approval from the company behind the MVP, Equitrans Midstream Corporation.

According to a Roanoke Times article, “An [Equitrans Midstream] spokeswoman Natalie Cox wrote in an email that it [the IRA] ‘would address issues that have presented costly, time-consuming delays in the construction of energy infrastructure projects and supports Americans’ demands to execute a timely transition to clean energy, while at the same time ensuring energy reliability and affordability.’” (Aug. 15)

Equitrans Midstream started constructing the MVP in 2018, but the project has been put on hold for a host of reasons. For legal purposes, the company is waiting on permit approvals and reissues from the Federal Energy Regulatory Commission, the U.S. Forest Service, U.S. Fish and Wildlife Service, the Army Corps of Engineers and the Bureau of Land Management.

Equitrans Midstream bosses are confident the IRA could make it easier for them to “complete their mission.” Additionally, Manchin is trying to get all lawsuits against the project out of the U.S. Circuit Court of Appeals for the Fourth Circuit, based in Richmond, Virginia, and into the U.S. Court of Appeals  for the District of Columbia Circuit, which he believes will be more favorable towards Equitrans Midstream and the MVP. (Mountain State Spotlight, Aug. 15) 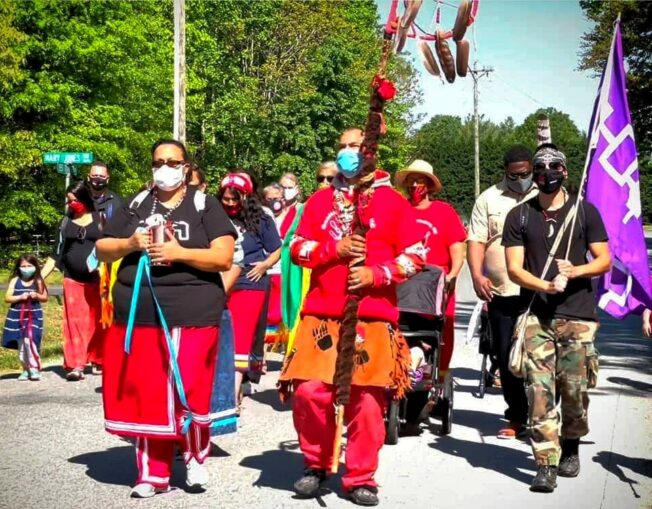 About 90 people participated in the May 2021 Water Walk against the extension of the Mountain Valley Pipeline from southwest Virginia into North Carolina. Credit: Crystal Cavalier-Keck

It is no coincidence that areas in Appalachia, subjected to centuries of resource extraction by mining and other energy companies, have experienced horrible flooding in recent weeks. Corporations that have benefited financially from ecological plunder rarely reclaim land they destroy. They never assist in rebuilding devastated infrastructure brought down by their “bottom line.”

Poor people and people of color suffer the most from environmental damage in Appalachia, while capitalist politicians like Manchin receive campaign funds and kickbacks from the companies responsible for ecological destruction.

Several people began fighting against the construction of the MVP early on. Crystal Cavalier-Keck, a member of the Occaneechi Band of the Saponi Nation, began doing research in 2018 when she found out the pipeline would carry natural gas about 75 miles from Pittsylvania County, Virginia, to a delivery point in Alamance County, North Carolina, ending roughly five miles from her home. Cavalier-Keck then started a campaign to inform others about the dangers posed by the MVP. (grist.org, Oct. 15, 2021)

Another Indigenous activist who organized early is Desiree Shelley, a leader of the climate justice organization Mothers Out Front. Shelley lives about eight miles from the MVP’s route in Roanoke County, Virginia. She was originally from Baltimore but moved to Virginia in 2017 to raise her family closer to the Monacan Nation center in Amherst County.

A Sept. 28, 2020, article in the Appalachian Voice quoted Shelley on the devastation she has witnessed over the years. She stated that ever since the MVP work started in 2018, when there has been a heavy rain, she can see sedimentation draining into the drinking water source for the city of Roanoke, Virginia: “I can drive along the road and see the stream overflowing, and the damage that it’s doing to people’s farms. . . . I can just see how brown the water is.”

This article documents the experience of an elder in Monroe County, West Virginia, Maury Johnson, who claims his water supply has been unfit for consumption, cooking and cleaning since construction of the MVP began close to his rural home. Johnson has filed over 182 complaints against the pipeline, and he claims more than 100 other people across the state have done the same.

The trap of the Democratic Party

While most leaders of the Republican Party openly embrace white supremacy and express disregard for the environment, the Democratic Party attempts to present itself as a “lesser evil” alternative. But despite its efforts at times to appear “progressive,” the Democratic Party is a capitalist organization that harbors big-business-backed bigots like Joe Manchin.

Segments of the Democratic Party’s previous “Build Back Better” bill were designed to improve material conditions for workers and oppressed people. But its partial commitment to developing green, sustainable jobs is pointless, when other for-profit ventures will continue to pollute the air workers breathe and poison the water people drink.

If Democratic Party leaders were serious about combating climate change, they would make a good faith effort to collaborate and cooperate with the government of the People’s Republic of China, now in the process of implementing the world’s largest system to reduce carbon dioxide emissions.

Instead, leaders of the Democratic Party, in lockstep with their Republican counterparts, are engaging in economic and political provocations against China. Revolutionary socialism is the only true alternative to either of these capitalist parties and their toxic legislation.