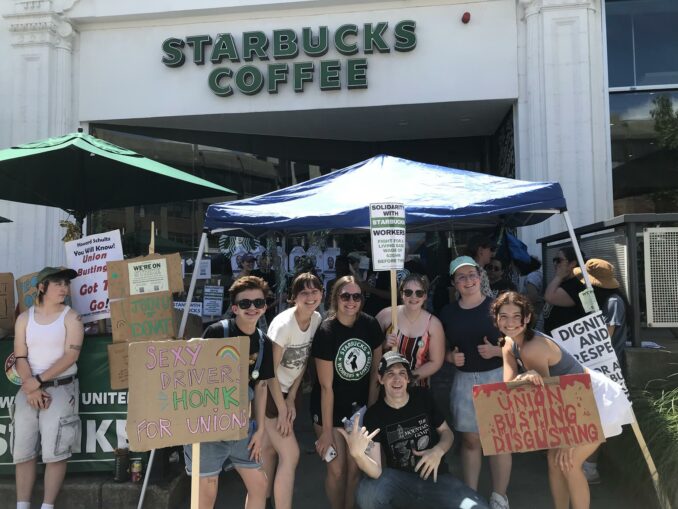 The longest strike in Starbucks’ history, at Boston’s 874 Commonwealth Ave. shop, concluded its fifth week Aug. 21 with solidarity appearances by Association of Flight Attendants-CWA President Sara Nelson and Senator Bernie Sanders. A movement of young workers and veteran unionists in Boston that coalesced to support the striking baristas has grown more determined than ever to see it through to victory.

The strike that began July 18 — just five weeks after the workers’ landslide National Labor Relations Board (NLRB) union vote — was provoked by a new openly-Trumpite store manager sent in from southern New Hampshire. This manager’s union-busting agenda included slashing workers’ hours to below the level to qualify for benefits and constant racist, homophobic and transphobic interactions, like removing the rainbow Pride flag — an affront to the many LGBTQ2S+ workers.

Starbucks’ Pinkerton machine didn’t expect workers’ defiance to its blatant Unfair Labor Practices at this highly profitable store across the street from Boston University. The same week the Boston strike began, billionaire CEO Howard Schultz — who ran for president in the 2020 Democratic primaries and was announced to be Hillary Clinton’s pick for Labor Secretary in 2016 — launched a massive union-intimidation campaign. He blamed Democratic Party-governed cities for a lack of police to provide “safety” to his stores, while he closed dozens of shops, many of them newly unionized, overnight.

While Schultz’s media blitz was underway, strikers constructed a 24/7 tent encampment in front of the store’s entrance.

As if to belie his own “Big Lie,” on Aug. 8 in Boston, Schultz ordered up cop details and arrest wagons, from this bastion of Democratic Party control — who at 5:00 a.m. escorted scab crews through the picket line in an attempt to open the shop. The Democratic city’s cops went out of their way to help strikebreakers “clean play” three weeks-worth of rotting food and haul away patio furniture strikers had been using, while warning strikers of arrest should they interfere with deliveries, which otherwise have been halted by Teamster solidarity.

Once the Boston Police Department showed up, the parade of Democratic Party politicians, who had stopped by the strike line the previous three weeks for photo ops, disappeared. On day one of the scab attack, the only political figures to show up were Tanisha Sullivan, president of the Boston NAACP, and Kendra Lara, first term Boston City Councilor and first person of color to represent her neighborhood. They were outraged by the sudden appearance of armed cops.

Solidarity tips the scales for strikers

With the balance of forces between 20 baristas on one side against one of the world’s largest corporations backed by the armed force of the state, strike line solidarity — which drew in thousands of mostly young workers and supporters and had sustained the 24/7 strike encampment — stepped into round-the-clock emergency defense, raising the demand, “Scabs and Cops Out Now!”

Strike defense has included “Mega-Picket” rallies, militant Karaoke, a baby-strike 30-day birthday party and sidewalk swing dance lessons. The strike line is a social hotspot for this generation, which has grown up under capitalism’s student debt peonage and climate crisis and in the Black Lives Matter atmosphere. It has become the place in town for workers assembling safely in-person (some hybrid by Zoom) to develop flexible tactics and strategies, often spinning on a dime to face unexpected conditions.

Multiple times a day and through the wee hours, workers meet in almost government-like fashion, figuring out what to do and how to carry out and enforce decisions which have life-and-death consequences for strikers facing destitution and no health insurance. Workers from adjacent Target, CVS, Amazon, Chipotle and Taco Bell stores, along with Greater Boston Labor Council constituent unions, have been supplying food, water, shelter and other supplies.

In over 40 years of partisan covering of every Boston-area strike since President Ronald Reagan busted PATCO (the former union of air traffic controllers) in 1981, this reporter has never experienced such a political, anti-capitalist, vibrant, united front of socialist-minded workers materialize in defense of a strike — conscious of themselves as a class force and optimistic about a victory.

As of this writing, Boston Mayor Michelle Wu, the first woman and person of color elected in the 400+ year history of “America’s Hometown,” has withdrawn the Boston police. The Democratic establishment, including former Boston mayor now U.S. Secretary of Labor Marty Walsh, and Starbucks’ union-avoidance lawyers and “Global Intelligence” goons are trying to figure out their next moves — which should be (but aren’t) immediate negotiations to settle the strike.

Workers World encourages all readers within travel distance to sign up for shifts on the strike line today at tinyurl.com/c6btbp93.

ALL OUT to Defend #874onStrike!

Steve Gillis is an elected leader and 37-year member of the Boston School Bus Drivers Union, USW Local 8751, now working for the union’s members and retired from driving.