“Change is coming to the UAW.”

This is the promise made to the rank and file of the United Auto Workers by the Members United candidates running for the union’s International Executive Board. This multinational grouping is challenging the entrenched Administration Caucus (AC) bureaucracy for leadership of the UAW. Led by candidate for International President Shawn Fain, Members United is campaigning under the banner of “No concessions. No corruption. No tiers.”

This is the first IEB election in the UAW’s history, where the rank and file will vote directly for its top leadership. For almost nine decades the IEB was chosen by delegates at the union’s Constitutional Convention. Conventions have been tightly controlled by the AC (which also calls itself the “Reuther Caucus,” named after former UAW President Walter Reuther) since it won control of the union during the witch hunt of the 1940s and 1950s, when Reuther drove Communist Party and Socialist Workers Party workers out of union leadership.

Members United has the support of the rank-and-file caucus Unite All Workers for Democracy, which waged a successful grassroots campaign to win “one member, one vote” — direct elections of the IEB — in a referendum by the membership that defeated the convention system by a 2-1 margin.

Beside Fain, the candidates are Margaret Mock for Secretary-Treasurer, Rich Boyer and Mike Booth for Vice Presidents, and LaShawn English, Brandon Mancilla and Dan Vicente for Directors of Regions 1, 9A and 9, respectively. Other unaffiliated reform candidates are also running for the IEB. Because the AC is still able to exert tremendous pressure on local UAW leaders, AC candidates were unchallenged in several IEB races.

Part of a new labor fight-back

Members United represents a real alternative to the top-down business unionism of the AC, which for decades has promoted a “partnership” with the companies that the union bargains with. This partnership has led to numerous contract concessions, one of the worst being tiered wages and benefits. This pay system has two workers, working side-by-side, doing the same work, but not getting the same compensation, because one has more seniority than the other. 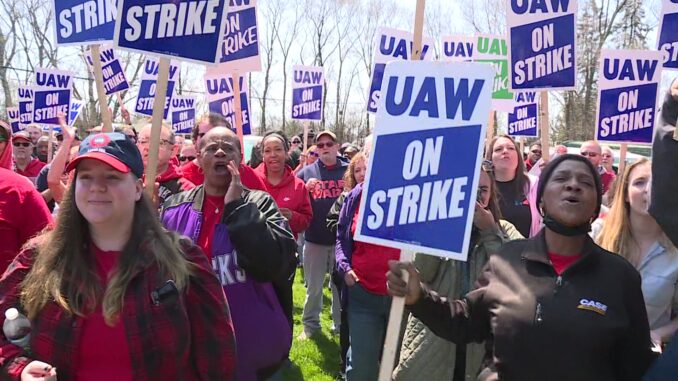 UAW members on strike at Case New Holland in Racine, Wisconsin, since May

“The days of unchallenged concessions will end,” English pledged in a campaign leaflet. She is a three-term president of UAW Local 1264 at the Stellantis (formerly Chrysler) Sterling Heights stamping plant. All the candidates are current or former elected local officers.

The challenge to business unionism inside the UAW is not happening in a vacuum. Earlier this year rank-and-file Teamsters union members voted to throw out the old guard, giving every national officer position to the Teamsters United slate led by President Sean O’Brien.

Members United has come together in the context of an emerging labor resistance, led by radicalized young workers at Amazon, Starbucks and elsewhere. Young workers in the UAW, including second-tier workers in manufacturing, along with higher education workers, are among the most outspoken — as July’s UAW Constitutional Convention demonstrated. Members United candidates include two young union leaders, Mancilla and Vicente.

These defiant candidates are part of a push throughout the labor movement for a return to class-struggle unionism.

Martha Grevatt is a retired executive board member of UAW Local 869 at the Stellantis Warren Stamping Plant.