The following article first appeared on workers.org in two parts, dated Aug. 1 and 8, 2002. In honor of Black August founded in 1979, WW is reprinting slightly edited versions of both articles which can also be found in “Marxism, Reparations and the Black Freedom Struggle” on workers.org/book/marxism-reparations-and-the-black-freedom-struggle/. 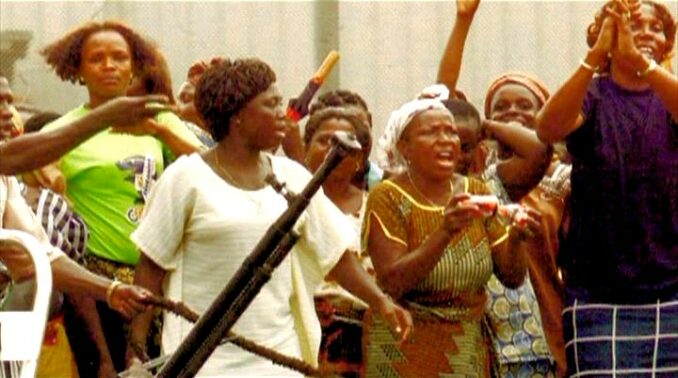 The quest for reparations by nationally oppressed peoples worldwide takes many forms. But the basis for this fundamental right is universal: just compensation to help bring about long overdue economic and political rights. Bold, heroic actions initiated by a group of African women in recent weeks must be viewed within this context and will certainly inspire the most oppressed everywhere to take similar actions, as capitalist greed allows the rich to get richer as the poor get poorer.

This takeover included taking a couple of thousand employees and managers hostage. In two separ­ate takeovers, these indigent women brought oil production virtually to a halt. This subsidiary normally produces half a million barrels daily. Nigeria as a whole produces 1.8 million barrels of oil a day, creating billions in profits for Big Oil.

Why have these women risked their lives to carry out these actions? They simply wanted to force a written agreement from ChevronTexaco, a multibillion-dollar global conglomerate, that it would provide their communities with electricity, schools, water systems, health clinics and other infrastructure to raise the level of their living standards. The women are also demanding that jobs be provided, including to their unemployed sons, and that pensions be provided for people over the age of 60.

The women protesters also decided to take these actions, because when their male counterparts attempted similar actions, they faced a greater risk of being arrested or physically harmed by police.

This protest took place in the heart of the Niger Delta. Like so much of the African continent, this region is superabundant in natural resources — in this case oil — but superunderdeveloped because of the legacy of the trans-Atlantic slave trade, colonialism and neocolonialism. It is considered one of the poorest regions in Africa.

Any commodity production with­in the developing economies exists mainly for export on the world capitalist market and not to serve the interests of the Indigenous population. For instance, Nigeria is the world’s sixth-largest exporter of oil and the fifth-largest supplier of oil to the U.S.

The first stage of the takeover took place on July 8 [2002] when an estimated 150 women took over four stations at the refinery. One of the brilliant tactics the women used was to occupy the aircraft runway, helipad and dock at the facility. No roads lead to this plant — only swamps and rivers. This technological underdevelopment, rooted in imperialist plunder, is the root cause of this protest.

An engineer among the hostages told Agence France-Presse that the women “are complaining that their children have not been given employment. They are not armed or violent. Most of them are women over 45, and there is no way we would lay a finger on them.” The majority of the workers in this plant are from the U.S., Canada and England. There are some Nigerian workers as well.

This particular phase of the protest ended on July 17 [2002] when protesters won a verbal agreement from ChevronTexaco that their demands would be met.

Another takeover by women occurred on July 18 [2002] at four more ChevronTexaco facilities, 50 miles east of the first protest. Their demands were similar to the ones that inspired the first takeover.

These women demanded that the Chevron officials visit their village to see firsthand the unspeakable poverty they have been forced to endure, compared to the state-of-the-art hospital, cafeteria, satellite television and other modern conveniences provided for the Chevron employees.

Athonia Okuro, a 28-year-old protester, suffered the loss of her husband from an unknown disease. Her children are chronically sick from mosquito bites that are the main transmission route of malaria. She commented, “I don’t know how [ChevronTexaco] can allow other human beings to live like this. Why do they treat us like animals?” (Associated Press, July 18, 2002)

The protesters also charged ChevronTexaco with environmental damage, especially the destruction of fish and cassava crops, both main staples of the Nigerian people, by the flaring up of natural gas.

Anunu Uwawah, a leader of the first takeover, stated, “I give one piece of advice to all women in all countries: They shouldn’t let any company cheat them.” (Salon, July 19, 2002)

Nigerian women protesters who had taken over five fuel stations owned and operated by ChevronTexaco declared victory on July 25 [2002]. The women said they decided to end their eight-day siege of the stations because management had agreed to meet their demands to build schools and hospitals and provide jobs, electricity and clean water to their poor villages. It remains to be seen if ChevronTexaco bosses will actually live up to their end of the deal.

This was the second siege of ChevronTexaco within a two-week span. The first took place at the Escravos station when another group of Nigerian women made the same demands on the multimillion-dollar conglomerate. These women won concessions as well.

The women were highly organized during both protests as they blockaded entrances and took hundreds of mainly foreign oil workers hostage. The siege brought oil production to a virtual halt.

The Niger Delta, where both protests took place, is rich in oil reserves. But it is also one of the poorest regions of Africa due to the tragic legacy of colonialism and Western imperialist plunder.

The women understand the despicable role ChevronTexaco plays in taking the precious resource of oil from their community while not helping to create an economic infrastructure for the well-being of everyone in the region. The women used direct action to say, “Enough is enough.”

Esther Tolar, one of the protesters, said: “History has been made. Our culture is a patriarchal society. For women to come out like this and achieve what we have is out of the ordinary.”