“What joy! Finally! To see Uvalde families smiling,” exclaimed Angela Villescaz, a founder of Fierce Madres in Uvalde, Texas. Villescaz explained to Workers World that a planned fundraiser by the Medina County Friends of the National Rifle Association had just been canceled, and this victory was joyous. 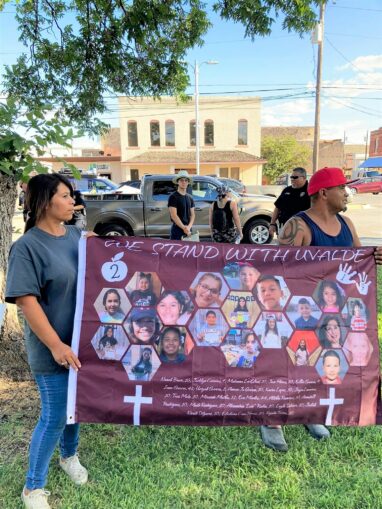 The NRA support group had planned a fundraiser in Medina County, next to Uvalde, at a time when families in that area are still reeling from excruciating pain and sorrow, which evolved into anger following the May 24 murders of 19 young school children and two teachers at Robb elementary in Uvalde. At the fundraiser they had planned to raffle an AR-15 weapon, the same gun that the killer had used in Uvalde.

Uvalde families, led by Fierce Madres, along with Hondo residents protested at a special Hondo City Council meeting Aug. 1. After a raucous meeting with tempers flaring and cops standing at the ready, the council decided to cancel use of city facilities for the planned Aug. 6 NRA event.

Longtime Chicano activist in Hondo, Chavel Lopez told Workers World: “They must have looked at the whole picture and realized it would have been hard to control things if they had allowed this fundraiser to happen. I didn’t really expect the vote to be good, since many on the City Council are conservative. So, I was surprised. But it was just not right to host a pro-NRA organization.”

Angel Garza, stepfather of victim Amerie Jo Garza, a 10-year-old girl killed May 24, was escorted out of the contentious council meeting after confronting a speaker supporting the NRA.

“My daughter’s dirt hasn’t even settled in her grave yet,” Garza told San Antonio Express reporters, cradling a framed color photo of his little girl. 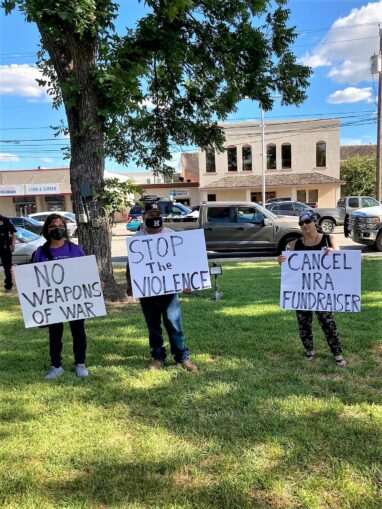 According to the Aug. 2 San Antonio Express, “After a 53-minute closed-door session the evening of Aug. 1, the council voted 4-1 to rescind the rental contract, drawing cheers and applause from Uvalde residents and some from Hondo, who filled the small chamber, making it one of the most crowded meetings here in years.”

A blow against racism

Fifty years earlier in Uvalde, there was a historic school walkout over racism in the Uvalde school district, where students were segregated by race and the schools in the Mexican neighborhood were not properly funded compared to the one in the white neighborhood.

Mexican families participated in the walkout, considered a defining moment in civil rights history, after a Latinx teacher at Robb Elementary was dismissed. Josue Garza, one of the few Spanish-speaking teachers, was speaking with parents in Spanish to encourage their students to continue their education. He had also held voter registration drives.

When Garza’s contract wasn’t renewed, hundreds of students boycotted Uvalde schools for six weeks in the spring of 1970, “putting the small town in the history books for staging one of the longest walkouts of the Chicano civil rights movement.” (Washington Post, June 23)

Fierce Madre Villescaz said that after the victory in Hondo, the NRA folks are now going into other small towns to raffle their AR-15s.