Buffalo’s Genesee Street Starbucks, the second Starbucks in the U.S. — out of more than 200 now — to win its union election, went on strike for three days July 29-31. 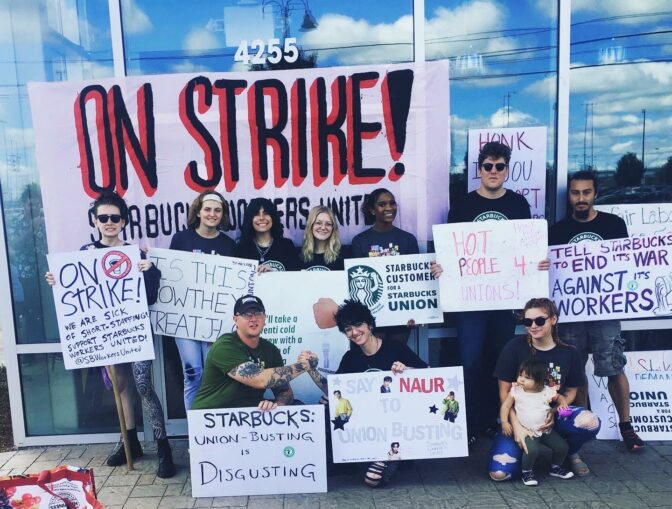 Genesee Street is the fourth Buffalo Starbucks to strike in July alone. This follows a wave of strikes in other cities, like the massive eight-store strike in Seattle, along with stores in Pittsburgh and Dallas. At the same time as the Genesee Street store baristas struck, stores in Ithaca, New York, went on strike, and another store in Pittsburgh went out Aug. 1. The Boston Starbucks strike has been going on for over two weeks, and workers have expanded the protest to put pressure on the National Labor Relations Board to end Starbucks’ ruthless union-busting operation.

Those listed are just a few of the Starbucks strikes that have taken place since the first successful union election last year. Common reasons have been retaliatory firings of organizers, slashed hours, store closings, threats and harassment from management, deliberate understaffing and overwork, unsafe working conditions and refusal to bargain for a contract. These are just a few of the over 250 Unfair Labor Practice charges Starbucks Workers United has filed with the NLRB against the company.

Starbucks has been waging a war of attrition against the union, trying to waste as much of the union’s time as possible and demoralize the workers. But the worsening conditions have caused many workers who were formerly on the fence about the union or in some cases against it to flip to a pro-union position.

Workers in these striking stores are facing the same conditions as many workers in companies outside Starbucks — like Apple, Trader Joe’s and REI, where stores have also gone union.

When the class struggle intensifies, most working class people end up on the side that aligns with their class interests. Starbucks workers understand that many of the problems plaguing their workplaces will only be solved by winning a union contract.

The author of this article is an organizer with Starbucks Workers United and member of Workers World Party.