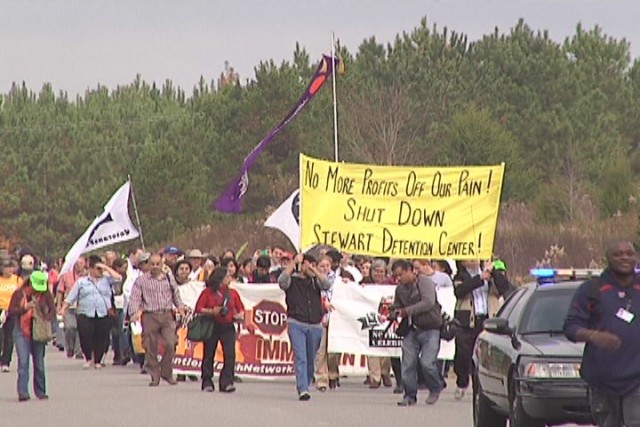 July 17 — Once again, a privately-operated immigrant detention center in Georgia is the focus of abuse charges by several women detainees.

A male nurse employed by CoreCivic at the Stewart Detention Center (SDC) in Lumpkin, Georgia, has been named in an official complaint to the Department of Homeland Security’s Office of Civil Rights and Civil Liberties.

Four women who were held at the SDC between late 2021 and early 2022 have described their frightening encounters with the nurse, who required them to remove their shirts and in at least one case a bra, to check their heart with a stethoscope while touching their bare skin. One woman said he put his penis in her hand and ordered her to pull down her pants.

They reported other very sexualized motions and facial expressions he made while supposedly examining them for an injured wrist or upset stomach.

Two immediately reported his behavior to corrections officials, who then subjected them to harsh, multiple interrogations, accused them repeatedly of lying and threatened them with seven years in prison for making a false accusation. The other two, fearing retaliation while in prison and a longer time in detention, came forward upon their release from Stewart.

Stewart opened in 2006 as a men-only facility, one of the largest detention centers in the country. Its failure to provide adequate medical care, edible food and sanitary conditions quickly brought it to the attention of immigrant rights activists.

For years, Georgia Detention Watch and its member groups have held demonstrations in Lumpkin and at the ICE headquarters in Atlanta, written detailed reports and initiated meetings and tours by elected officials of the facility. They also educated the public about CoreCivic, the for-profit, private corporation that makes tens of millions of dollars in profit imprisoning immigrants.

Women began being housed at Stewart in late 2020. This followed the explosive revelation that women at the Irwin Detention Center in Ocilla, Georgia, had undergone unnecessary gynecological procedures without their consent. The federal government cut its ICE contract with Irwin’s private prison corporate operator and began to ship women to Stewart in late 2020.

Stewart already had a reputation as the deadliest ICE detention center in the country, due to lack of medical care and suicides. Then COVID-19 deaths cemented that brutal reality.

CoreCivic claims its investigations into the sexual abuse charges found them to be “unsubstantiated” and “unfounded.”

The male nurse was still employed at Stewart as of May.

On July 15, a press conference was held in front of the Atlanta ICE office. The speakers demanded that the women who so bravely came forward be believed and that Stewart be shut down now.

Additional information can be found in the July 14 Intercept article,“The Worst Day of My Life.”