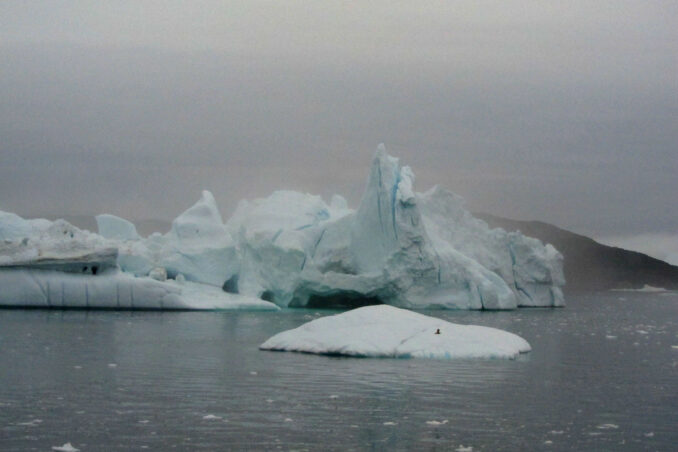 Iceberg in Disco Bay at the mouth of the Ilulissat Ice Fjord, Greenland. It calved from the Sermeq Kujalleq, the largest and one of the fastest moving glaciers in the northern hemisphere.

Before I understood what it all meant, I thought it was awe-inspiring to see icebergs in the ocean waters around Newfoundland and Greenland. Majestic big ones (how large must they have been to travel so far from their glacial source and still be huge) or somewhat smaller ones that became trapped in fjords or bays to melt away over summer, giving local residents the pleasure of their company and maybe a chance to chip off a chunk of pure, 100,000-plus-year-old ice for their drinks.

Though some of these icebergs resulted from the normal calving of glaciers, as they flowed down to the sea around the Greenland ice sheet, at least some in the last few years were evidence of the greater fracturing due to the alarming melt rate.

The dire straits of the world’s climate is attributed to massive levels of greenhouse gases (GHG) that are warming the planet to crisis levels. These GHG were produced by centuries of burning fossil fuels, especially since the production of petroleum, removing forest cover and extensive farming which exposed carbon previously sequestered in dormant soil. Even though the world is well-aware of impending climate catastrophe, the necessary public policy changes to limit carbon release are not being made quickly enough or even at all.

The U.N. Report “Climate Change 2022” concluded that: “Net anthropogenic GHG emissions have increased since 2010 across all major sectors globally.” (U.N. report pSPM-7) That means that human-produced emissions of polluting greenhouse gases continue to increase, despite all the warnings, massive demonstrations, some shifts to wind and solar generation and experiences of climate-related disasters.

It is in this context of a looming crisis that the U.S. Supreme Court delivered its reactionary ruling last week denying the Environmental Protection Agency (EPA) the authority to regulate emissions from coal-powered plants.

The ruling on emissions from coal-powered generating plants was made despite the Court’s past practice of acknowledging that it is the designated regulatory agencies, not the judicial or the legislative branches, that have the expertise and responsibility to devise policies to solve complex problems.

It is now expected that the Supreme Court will rule in a similar way, as other cases come up that challenge the authority of such specialized agencies as the Food and Drug Administration and the Centers for Disease Control and Prevention, as well as others involving the EPA.

Even weak policies to protect people from damage inflicted by profit-driven corporations are anathema to the court. Life in the U.S. will become increasingly unsafe, as the unelected conservative justices continue their campaign to curtail regulatory oversight. This indeed raises the question about why they do not want protective regulations.

The consequences for world climate will be significant. The U.S., unsurpassed in the world as a climate hypocrite, continues to be the largest contributor to world GHG emissions. It hides its full responsibility for carbon emissions by excluding some sources of pollution altogether. For example, since much of its manufacturing is done in other countries, GHG emissions related to manufacturing and shipping of its vast imports are attributed to the country of manufacture, often China, so that China looks like the irresponsible one. (tinyurl.com/46p7hjk4)

The massive releases of GHG created by U.S. wars abroad are not included in the U.S. carbon account. (tinyurl.com/zzvzdr8d)

What are the consequences we — and the “august” Supreme Court justices — should be worrying about?

The list goes on and on. Yet the unelected justices in Washington are not concerned. You have to wonder just what planet they live on, that they sabotage ours.