Since June 9, the House Select Committee to Investigate the January 6th Attack on the United States Capitol has built a case against former President Donald Trump, members of his administration and Trump allies. The Committee will hold additional hearings this month, keeping the spotlight on a very real, growing and dangerous fascist movement.

This movement did not appear from out of nowhere on Jan. 6, 2021; the election of an openly racist and xenophobic president in 2016 encouraged it. Events like the 2017 “Unite the Right” mobilization in Charlottesville, Virginia, where one anti-racist was murdered and many were injured, laid the foundation for the attack on the Capitol.

Discussions of the hearings are currently focused on the bombshell testimony of Cassidy Hutchinson, a former White House aide and assistant to former Chief of Staff Mark Meadows during Trump’s administration. She described in detail the former president’s eagerness to join the white-supremacist mob that stormed the U.S. Capitol.

Hutchinson testified that both Meadows and Trump knew in advance that the armed fascists would attempt to enter the Capitol and that she was told by a Secret Service agent that Trump went so far as to assault that agent, while he was attempting to drive the president back to the White House.

But what will be done with all this damning information? (Besides providing material for comedians and late-night talk show hosts!)

For the Democratic Party, both the awful Supreme Court ruling overturning Roe v. Wade and the Select Committee’s evidence against Trump serve a similar purpose. That is to convince the masses that the way to bar further encroachments on basic democratic rights is to “vote blue” in November’s midterm elections. The message pushed at more moderate mass demonstrations against the SCOTUS ruling was the need to elect pro-choice candidates.

And even after November, SCOTUS will still have a right-wing majority for some time.

Voting is not enough. Why can’t the Democrats and their backers in organized labor call for a mass mobilization against the ultraright, right now?

The Democrats do not want to see the fascists gain ground. Even “moderate” Republicans like House Rep. Liz Cheney are alarmed by Trump’s extremism. An extremist mob chanted in unison: “Hang Mike Pence” — yes, they were attacking Mike Pence, even though he is anti-reproductive justice and anti-LGBTQ+. The fascist mob would be unkind to all those opposing Trump.

But what the Democrats really favor is a kindler, gentler and by comparison more democratic brand of capitalist exploitation. Even “democratic socialist” Bernie Sanders is not for abolishing capitalism, much less so mainstream Democrats like President Joe Biden and House Speaker Nancy Pelosi. On the international arena, both the Democratic and Republican parties have been loyal agents of U.S. imperialist interests, serving the bankers, arms manufacturers and billionaires of all types.

The risk for the Democrats in calling out the masses is that the masses might take the struggle against fascism “too far”; i.e., they might not settle for just defeating the Trump wing of the ruling class. The masses in motion can have a tendency to stay in motion, which could mean taking the struggle further to one against capitalism as a whole and not just its most oppressive, most repressive, chemically pure form manifested as fascism.

A fascist state is only one form of the capitalist state. A state, as Marxists understand it, is an instrument of class rule. This was true of enslaver states and feudal states in earlier epochs, and it is true of capitalist states, including imperialist so-called “democracies” in the U.S., Europe and Japan.

Regardless of its form the capitalist state serves to keep the working class of the world exploited, so profits keep flowing into the pockets of the ruling class. The capitalists use a combination of “the carrot” (concessions to the workers and oppressed) and “the stick” (taking rights and benefits away, brute force). Traditionally Democrats have offered more carrots, and Republicans wielded a bigger stick.

But their aim is the same, and in this late stage of capitalism, the tendency is toward the stick. Fascism is that tendency’s ultimate expression — in fact the word fascism comes from the Italian word for the binding of a bundle of sticks used as a club. Its goal is to crush every organization and every expression of resistance of the workers and oppressed. 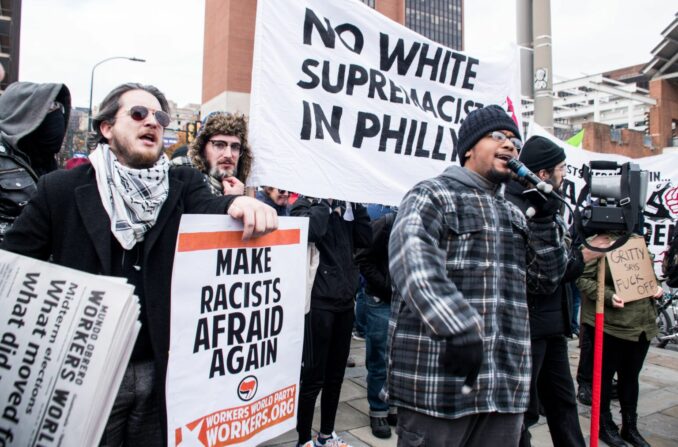 The facts that Trump-endorsed candidates have won a number of Republican primaries and some could be elected in November do not, of course, signal the triumph of fascism — but it is cause for alarm. Terrorist groups like the “Proud Boys” and individual white supremacists are committing murder and threatening activists. This includes the thwarted plot to attack Pride in Idaho and reports of armed Proud Boys near the Akron protests over the police killing of Jayland Walker.

The Democratic Party will use the hearings to expose the Trumpites, but it has a mushy spine. Only the workers and oppressed can defeat the far right — and that is who has the most at stake. The fascist threat calls for an organized working class response.

Unfortunately most of the leadership in organized labor is tied to the Democratic Party. But our class is developing its organizing skills, evidenced by a string of union wins at Starbucks, Amazon, Apple, REI and elsewhere. Millions of working-class youth of all nationalities were part of the Black Lives Matter upsurge following the police lynching of George Floyd.

The line from the old union standard “Solidarity Forever” still rings true. “In our hands is placed a power greater than their hoarded gold” — or their mighty clubs. We produce everything in society, and we can bring everything to a halt. We can organize a mass movement in the name of the working class that fights on every front.

That, and that alone, can push back the danger posed by fascism.