Joining supporters of political prisoner Mumia Abu-Jamal, Houston activists participated in the 40 Cities for 40 Years events by dropping banners over a busy freeway during 5 p.m. traffic as workers were leaving downtown Friday, July 1. 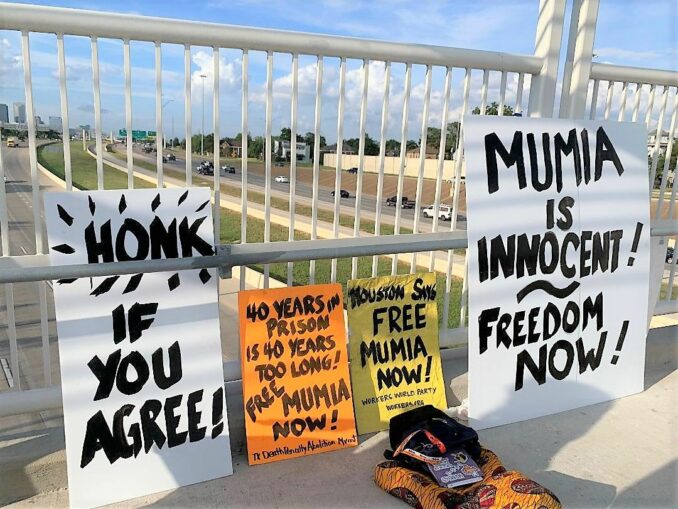 They held giant signs reading “Mumia Abu-Jamal is Innocent! Freedom NOW!” And “Honk if You Agree!” The cars streaming under the Southmore bridge saw numerous signs and banners and learned that Mumia was a political prisoner wrongfully sent to death row in 1982. 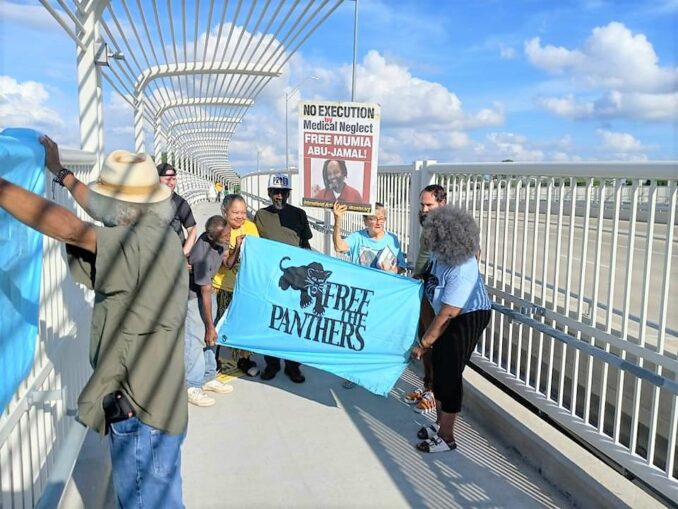 Members of Houston’s Black Panther Party Alumni Association brought their traditional light blue banners with a panther on them. Mumia joined the BPP as a teenager. As abolitionists held their banners, activist Trey Legall tied a banner for the S.H.A.P.E. (Self-Help for African People through Education) Community Center on the bridge with his shoelaces and then proceeded to drum for the duration of the protest.

Others participating in the banner drop were with the Texas Death Penalty Abolition Movement, the National Black United Front, S.H.A.P.E.’s Elders Council of Wisdom and Workers World Party.

As NBUF national chairperson Kofi Taharka told the crowd, “We must continue to support Mumia and all of our political prisoners. We cannot forget them. We have seen the release of Jalil Muntaqim and Sundiata Acoli, but there are dozens more, including Jalil Al Amin, Leonard Peltier, Ruchell McGee and many others. Free Mumia and free them all!