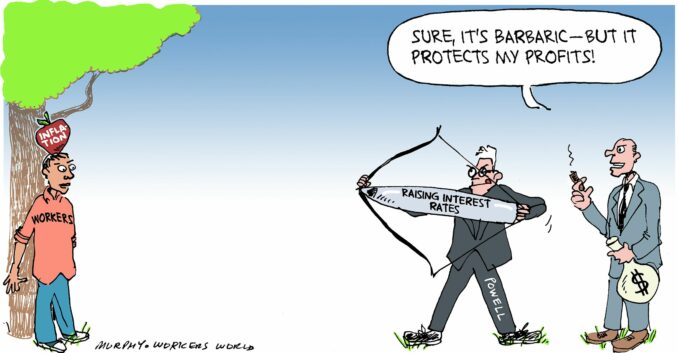 This slightly edited talk was given by WWP First Secretary, Larry Holmes, at a New York City branch meeting on June 16.

The economic crisis that is unfolding is by far the biggest development right now. Bigger than anything I can think of, and a lot of important things are happening.

One of the things that makes it more dangerous, more combustible for capitalism and also for the working class, is that a number of other crises are developing at the same time, and they all impact on each other. There’s the war crisis, which definitely impacts the economy. I’m not going to mention all the crises, but there’s a political crisis in this country with the ruling class, and the Jan. 6 hearings now on television are a reflection of that.

It’s not an overstatement to say that right now, even as distinct from a few weeks ago, Wall Street has been gripped by panic. Listening to these bankers and the “talking heads” and reading what they’re saying, they’re trying to tamp down demoralization and are freaking out like the world’s coming to an end. That seems to be the mood, at least on the part of a lot of bankers and investors — and a lot of people associated with finance capital, not only in this country but around the world.

In the 1980s, the working class was too weak to stop globalization, reindustrialization, job-killing technology — what the ruling class calls neoliberalism — austerity and plant closings. By the time the 2008 financial crisis came, it was initially precipitated by a credit crisis in the housing market. But a crisis in one area of the economy can be just a catalyst to open the floodgates, letting everybody see the extent of the general crisis underneath.

The capitalists dealt with the financial crisis, after it almost crashed the financial markets. It was called the Great Recession, because of the jobs it destroyed and the austerity it brought in, and it particularly woke up young workers. There was a change of mood, of expectations, on the part of young workers. Perhaps the first expression of that was Occupy Wall Street.

The ruling class dealt with it in two ways. One was they got behind Barack Obama, a very attractive, first African American president. That was sort of a concession to the working class. We all know how he turned out. He was not a leftist but a protector of the interests of capitalism, all the way.

And the other was to start with so-called quantitative easing — and that was a number of things. The biggest was that the Federal Reserve printed a lot of money. And actually central banks around the world printed a lot of money and funneled it into the financial system, to the tune of trillions of dollars. Also, keeping interest rates close to zero was part of quantitative easing. The problem with that was that it couldn’t go on forever.

This creates inflation, in part, and creates a gigantic debt bubble, [where] all of this money is basically worthless, because it’s not based on workers producing something. It’s just phony, like Monopoly money. Try to imagine tens of trillions of dollars on top of the tremendous debt that already exists.

As Lenin explained in “Imperialism, the Highest Stage of Capitalism,” at a certain point, finance capital, the banks — which in the earliest stage of capitalist development were sort of the mid-person making sure that big and small companies got the capital, so they could create means of production and exploit workers — got bigger and bigger in relationship to the economy. Today finance capital has become predominant over the productive side of the capitalist economy, basically turning it into a giant Ponzi scheme.

That’s the situation that the global capitalist economy is in now, and that has created this tremendous bubble. And when there’s a crisis like this, and the capitalists have run out of ways to fix it, that bubble, to one extent or another, begins to burst, and the economy can become a house of cards. Before long, companies, banks, even countries, are going bankrupt, collapsing.

What the bankers are saying

Jamie Dimon, [Chief Executive Officer] of JP Morgan, is the most powerful banker in the United States and in the imperialist world. Try Googling “the most important banker” or “the biggest banker in the U.S.,” and you’ll get Jamie Dimon. It doesn’t mean that all the other bankers aren’t important. The head of the Federal Reserve, Jerome Powell, is an investment banker too. But the bankers who are on top of billions and trillions of dollars, they listen to JP Morgan.

An article about two weeks ago quoted Jamie Dimon as saying “We’re headed toward a hurricane.” Other investment bankers have been saying similar stuff. They’re not showing up on television, maybe trying not to panic the financial community around the world. Another well-known popular investor, Michael Novogratz, said today after the latest reading of the stock market, which was way down, that the economy is “going to collapse.”

Hypothetically, it’s possible that the capitalists will find some genie or some rabbit in a hat somewhere to stave off this crisis, to do some version of what they did 12 or 13 years ago, or in the dotcom crisis of the 1990s, or back in the 1980s. But it’s going to be much, much harder now, because they’ve run out of ammunition. And the fact of the matter is that they clearly say that they don’t know what they’re going to do if this thing gets out of control.

The only thing we can be sure of is the class struggle. The capitalists will try their damnedest to have the working class and the oppressed — not only of this country but of the world, particularly the Global South — bear the brunt of this new crisis. 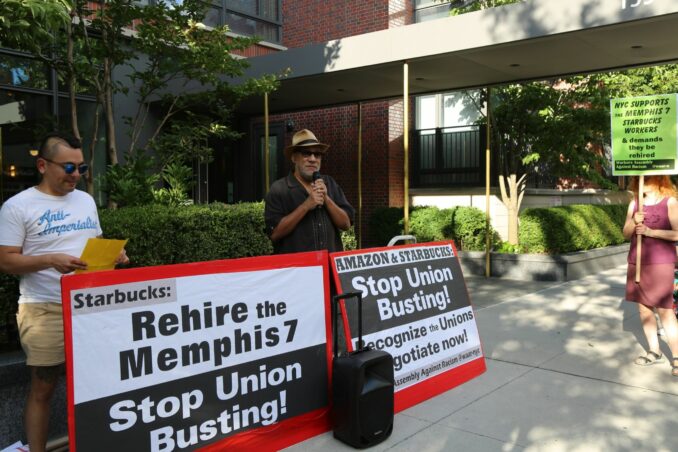 This is the situation we face — but there are good things happening. There is the upsurge of workers and the organizing drives, not only at Amazon and Starbucks but many, many more places. That’s a sign of a long-awaited reawakening of primarily young workers.

This left coalition in France, including remnants of the Communist Party, some socialists and others, practically won the first round of the recent parliamentary elections there. This is very important because, as many of you know, politics in France have for the longest time been strongly influenced by the neofascists.

Fight against fragmentation is key

Our class is always fragmented to one extent or another. But when the labor movement, when the revolutionary forces, or even the progressive forces in the working-class movement are weak and not a strong force of gravity pulling the workers together, then the forces of fragmentation and bourgeois ideology are all the more powerful. And in an economic crisis, there’s a tendency for the fragmentation to go either one way or another. The fragmentation can be exacerbated in a way contrary to the working class coming together.

But if the struggle takes hold and class consciousness wins out, the fragmentation can be diminished. Class solidarity and class struggle can prevail.

Amazon is now in Phoenix, Arizona, with its high-paid lawyers. They’ve dragged the leadership of the Amazon labor unions to Phoenix, demanding that the [National Labor Relations Board] hearing they wanted not be held in New York. They thought New York was prejudiced in favor of the workers. And so they wanted to take it to the South, where they thought it’d be more advantageous for them.

This hearing is meant to overturn the results of the historic election on April 1, when the union won at the Amazon facility on Staten Island. Amazon has sworn to crush that. And they’re very serious about it.

I have no idea whether they’re capable of doing it. I know that the Amazon Labor Union feels they can hold their own. But they’re out there alone.

In the meantime, the AFL-CIO held a big convention in Philadelphia, and one of the workshops was on Amazon. But they did not even invite the leadership of the Amazon Labor Union or, for that matter, somebody from the Starbucks organizing drive to speak.

Look how strange this is. Biden invites the [ALU] leadership to come to the White House, but the AFL-CIO doesn’t invite them to speak. They could have easily hooked up with someone from Starbucks. Someone from that union, wherever they were from, could have spoken.

This is an example of fragmentation. Everybody who follows this says, “This victory was historic, because it can bring more victories.” Moreover, what the Amazon and Starbucks workers and others do will help transform the working class in a progressive, revolutionary way. This doesn’t affect just Amazon workers and Starbuck workers, it affects the whole class.

It would be a great thing if the workers’ assemblies could call days of action to demand that Amazon recognize the union. The question is are we capable of doing that? If we did that, it would be not only a place where people who wanted to be with the workers could come out. It would also open up a fight, a healthy and absolutely necessary fight, with the trade union bureaucracy.

Our trade unionists on every level could put pressure on them: “What are you doing? How come you’re not doing this? How come central labor councils, Jobs Without Justice, aren’t calling big demonstrations in support of the Amazon workers under attack, the Stop & Shop workers, and immigrant workers and all workers?”

I would argue for us as communists to open our eyes and see more clearly than anyone else what is actually unfolding. It’s a global capitalist crisis. When the U.S. central bank, the Fed, lowers or raises interest rates, virtually all the central banks across the world do the same thing. It’s a global crisis.

We must dig down deep. Be very objective, be sober and ask ourselves how we can transform ourselves to be of service to the working class in the midst of what looks like a historic economic crisis.