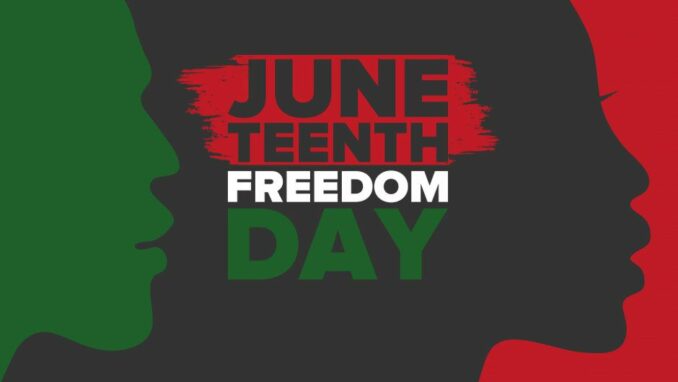 This year marks the first anniversary of Juneteenth as an official federal holiday since it was signed into law June 17, 2021, by President Joe Biden.

The day is a recognition that on June 19, 1865, enslaved Black people were liberated in Galveston, Texas — two and a half years following the enactment of the Emancipation Proclamation made by President Abraham Lincoln.  Many Black people were either kidnapped to countries like Cuba or Brazil where slavery still existed until the late 1880s or even murdered by Texas enslavers.

Many Black people view Juneteenth as the “second day of independence” following the U.S. “independence” from Britain in 1776. Even before Juneteenth — also known as “Freedom Day” — was made a legal holiday, Black people celebrated this anniversary of their emancipation all over the U.S. with marches, rallies, along with an array of social and cultural events. But the bourgeois media paid little to no attention to these celebrations.

The federal holiday will no doubt help to raise consciousness of the significance of the day for millions of people who have very limited knowledge of the heinous crime of slavery and the heroic struggle to overturn it — with rebellions led by enslaved people like Denmark Vesey, Gabriel Prosser and Nat Turner, and white allies like John Brown.

It took a bloody Civil War, where the Confederacy was defeated on the battleground in 1865, to eventually end chattel slavery, granting legal freedom but also opening the path to semi-slavery for Black people. These are important historic and political events that in one degree or another are absent from the mainstream history books.

What led to this federal holiday — similar to the Dr. Martin Luther King Jr. holiday enacted in 1986 — was the present-day mass struggle against racist police brutality and other forms of white supremacy under the banner of Black Lives Matter. This struggle reached its peak following the public lynching of George Floyd in May 2020, when millions of people took to the streets that summer with the main demand, “Defund the police!”

Of course, the liberation of Black people did not begin nor will it end with Juneteenth. The suppression of Black Reconstruction in the aftermath of the Civil War meant the goal of granting Black people full bourgeois democratic rights was abruptly cut short. The white-supremacist counterrevolution laid the basis for today’s reality of Black people in disproportionate numbers being relegated to a second-class status, with some of the worst housing, education, health care and nutrition in the country, along with being subjected to mass incarceration and police terror.

And now with Juneteenth being elevated on a national level, the ruling class and its media mouthpieces will attempt to co-opt this holiday by finding ways to make profits and by putting their own spin on “looking back at the past,” as a diversion from granting full equality.

Instead, Juneteenth should be a clarion call for reparations for the descendants of once-enslaved people, whose unpaid labor was superexploited by white plantation owners. The inspiration of Juneteenth can inject a heavy dose of anti-racist solidarity to help move the classwide struggle forward by workers of all nationalities, ages and genders, uniting to organize for a liveable wage and more humane working conditions.