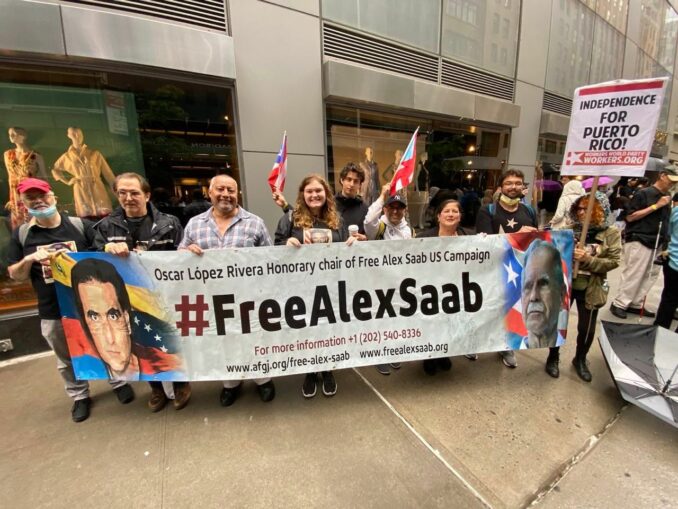 The contingent demanded the decolonization of Puerto Rico and an end to the subjugation and exploitation by U.S. forces of the peoples of the island and throughout the Caribbean. The NY-NJ Cuba Sí Coalition, which advocates for stopping the deadly U.S. economic blockade on Cuba, joined the contingent, as all chanted, “Puerto Rico, Cuba, somos una sola!” (“Puerto Rico, Cuba, We are one!”)

Despite attempts by police and corporate sponsors to divide the anti-imperialist contingent, activists waved the Grito de Lares, Cuban, Nicaraguan and Venezuelan flags to cheers from the crowd. Many spectators put their fists up in the air or gave a thumbs-up to show support for Puerto Rican independence and the other anti-imperialist struggles represented.

The Puerto Rican independence movement holds that the struggles for Venezuelan, Cuban and Nicaraguan sovereignty are connected to their own struggle resisting U.S. imperialism.

The kidnapping of Venezuelan Alex Saab

June 12 marked two years since the kidnapping of Venezuelan diplomat Alex Saab, while on a humanitarian mission to Iran to try to alleviate the effects of the U.S. economic warfare and sanctions against Venezuela.

While traveling to negotiate a deal for Venezuela to receive more fuel, food and medical supplies, Saab — an accredited diplomat protected under the Vienna Convention — was abducted in Cape Verde without an arrest warrant or Interpol alert and was taken to the U.S. in October 2021.

Cape Verdean authorities had kept him arbitrarily imprisoned for 491 days without due process, in violation of the laws of Cape Verde. During that time, Saab experienced torture. Alex Saab’s abduction is an attack on Venezuela’s sovereignty and a blatant violation of human rights and international law.