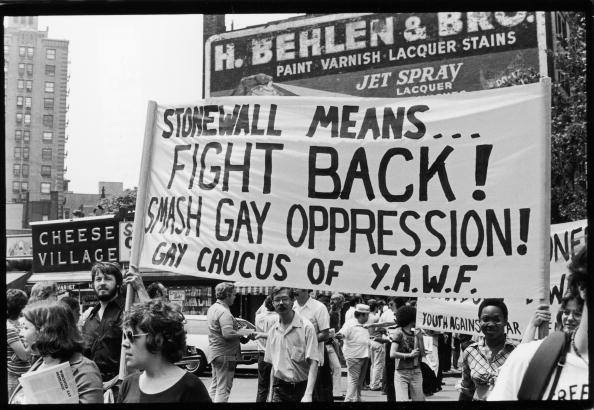 A contingent from Youth Against War and Fascism (YAWF), a youth affiliate of Workers World Party, at the 1974 New York City Pride march.

For over half a century, Workers World newspaper has covered the global struggle to end all forms of discrimination, persecution and violence against lesbian, gay, bisexual, transgender, queer and gender-nonconforming communities.

WW consistently backed up our activist coverage with analysis. In the early 1970s, WW ran a series of articles that led to publication of “The Gay Question: A Marxist Appraisal” in 1976. Then in 1993, WW republished it as “The Roots of Lesbian and Gay Oppression: A Marxist View,” with the first book’s original text and a new preface and afterword. (These and works below are available at workers.org/books.)

In 2004, WW managing editor and globally recognized transgender leader Leslie Feinberg began the “Lavender & Red” series, which ran until 2008 in WW. A group of 25 articles from that series was later published as the book, “Rainbow Solidarity in Defense of Cuba.” Notify us if you want a free paper copy.

In 2012 Feinberg engaged in civil disobedience and wrote articles defending Black trans woman CeCe McDonald, who was charged with manslaughter after defending herself from a racist, bigoted attack.

In 2022 WW extensively covered resistance to the current storm of right-wing “Don’t Say Gay” and anti-trans, anti-youth laws sweeping the U.S. WW articles built resolve in the struggle for reproductive justice, pledging “We won’t go back,” and documented opposition to racist laws limiting the right to vote and the right to teach a people’s history of resistance to oppression.

WW reporters on the ground — from Buffalo, New York, to Portland, Oregon, to Brookwood, Alabama — celebrated the tremendous groundswell of worker organizing that won historic union victories against Amazon and Starbucks — victories fueled by the leadership and solidarity of young, multinational, queer, gender-nonconfirming workers.

Since the early 1990s, the fund has helped sponsor the workers.org website. Throughout the pandemic when fewer print issues have been published due to staff health concerns, new articles have been posted daily, and the PDF of the weekly newspaper has been displayed at workers.org. Not one online issue has been skipped throughout this over two-year health crisis.

For a donation of $60 a year, or $120 or $300, you receive a subscription to WW newspaper and one, two or three free subscriptions for friends, depending on donation. A free download of the “What Road to Socialism?” book, published in 2020, is available at workers.org/books. Or notify us if you want a paperback book.

Write checks, either monthly or annually, to Workers World. Mail them with your name and address to Workers World, 147 W. 24th St., 2nd Floor, New York, NY 10011. Put “Supporter Program” in the memo line. Or donate online at workers.org/donate/.

We are grateful for your help in building Workers World!