Workers World Party offers our deepest solidarity, love and condolences to Uvalde, Texas, especially to those who lost loved ones in the May 24 massacre of 19 elementary school children and two teachers. We hope for a recovery for the 17 people injured. But we know they, and all those impacted by this tragedy, are traumatized for life.

One cannot imagine the pain felt in this close-knit working-class community of 16,000 people — nearly 80% Latinx and not far from the Mexican border.

Adding to the trauma was the deplorable, racist conduct of the 100 federal, state, local and school police officers on the scene. While the shooter was inside the school, police remained outside for an hour, handcuffing, tackling, pepper spraying and tasing parents who were trying to get inside and retrieve their children. Police who did enter stayed in the hallway outside the impacted classrooms, refusing to intervene despite repeated calls to 911 from children inside. After nearly 70 minutes a U.S Border Patrol cop entered the classroom and fatally shot Salvador Ramos.

The message sent is that the lives of Mexican children are expendable.

Remarkably — or maybe not so, considering the fascist he is — Texas Gov. Greg Abbott praised the “amazing courage” of the police. His blatantly false statements were matched by Texas Department of Public Safety director Steve McGraw. Now these two are trying their hardest to walk back their outlandish comments.

The abuse of desperate parents once again explodes the myth that police are there “to protect and serve.” They are part of the repressive state apparatus that under capitalism represses the working class, especially the most oppressed. The militarized state employs the most unthinkable violence, in the U.S. and around the globe, to maintain its hegemonic control over the world’s labor and resources.

The pervasive violence in television and movies serves to create a culture that normalizes and legitimizes violent acts. Young people — troubled, abused, exploited and alienated — are saturated with this culture at an early age.

At the same time, many children are taunted and bullied by their peers if they don’t “fit in,” i.e., they don’t measure up to a racist, patriarchal and ableist standard of beauty. Others are abused by parents within the “traditional family” structure that is like a microcosm of the capitalist workplace — the head boss being the father. Some experience both of these forms of psychological assault.

In this context, coupled with an inadequate mental health infrastructure, a handful of youths lash out at the most vulnerable and commit massacres.

If they fit the profile of most mass shooters — white and male and embracing fascist ideology like Dylann Roof and Payton Gendrun — they will likely be arrested alive and be afforded their day in court. This was not the case with Salvador Ramos. 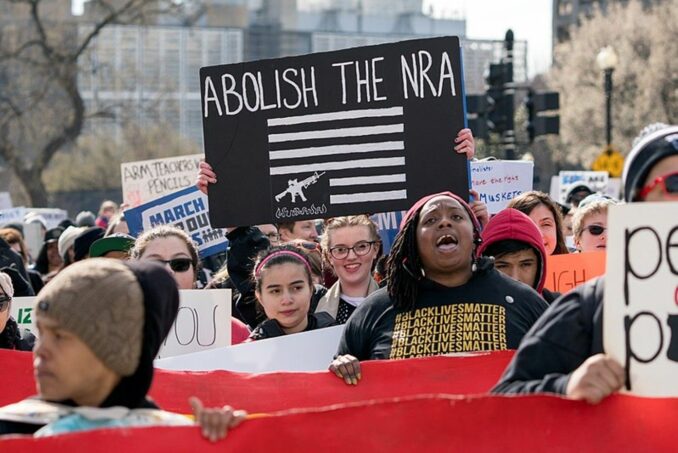 If we are to understand the rising number of “senseless” mass killings, we have to “follow the money.” Billions in profits are made in the manufacture, sale and resale of guns, including the assault weapons used in mass shootings. Gun manufacturers sold over 11 million guns in 2020 alone. The more permissive the law, as in “open-carry” states, the more money to be made.

Hiding behind the Second Amendment, the National Rifle Association is one of the most powerful lobbying groups in the U.S. Its annual budget hovers around a quarter-billion dollars. While it claims most contributions are from individual donors who buy into its propaganda, the NRA receives millions of dollars from weapons profiteers.

After the Uvalde massacre, the NRA callously went ahead with its plans to hold its convention in Texas. Former President Donald Trump and Senator Ted Cruz — who currently represents Texas — were keynote speakers.

The NRA, a blatantly racist organization, has never supported the Second Amendment when it comes to the right of Black, Brown and Indigenous people to self-defense against racist attacks.

And it’s not only gun manufacturers raking in profits. As the saying goes, “violence sells.” Billions are made in the name of “entertainment,” with the most graphic depictions of people and imaginary creatures brutalizing and killing one another.

But the ones who profit the most from violence are those capitalists intertwined with the military-industrial complex. They do so with bipartisan support for the bloated Pentagon budget — seizing the money needed for health care, including mental health care. To sell their profitable wars of conquest, they need to win cultural acceptance of that slaughter, committed in the name of “freedom and democracy.”

Stop the purveyors of violence

It is worth recalling the words of Dr. Martin Luther King Jr., who in his famous speech 45 years ago, “Beyond Vietnam — A Time to Break Silence,” called out “the greatest purveyor of violence in the world today — my own government.”

There was a slogan popular at the time with the most militant antiwar youth: “2, 4, 6, 8, organize to smash the state!”

Until capitalism and its repressive state machinery are overthrown, violence — by the cops, the military and individuals — will continue to claim lives, including those of children.