May 14 — A fiery passionate crowd of 70 Starbucks workers and supporters protested at Portland’s Jantzen Beach Starbucks store, because the manager there fired Matt, a shift supervisor, for trying to unionize.

Ian, a Starbucks worker from Eugene traveled two hours to the protest. Seven out of eight Eugene Starbucks stores were recently successful in voting in a union. Ian said there is an 80% national turnover rate of Starbucks employees and that 80% of Starbucks workers have only worked there for one year. 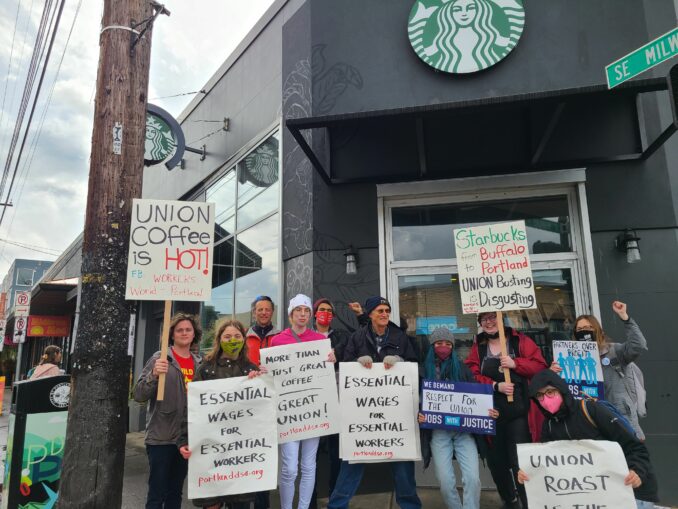 Arthur (center, with placard), who works at a downtown Portland Starbucks, said, ‘Workers get $14 an hour, but it’s not consistent work. Starbucks is not giving us enough hours to make a living wage.’  WW Photo: Lyn Neeley

Alex Riccio, a national Starbucks Workers United organizer, traveled here from Philadelphia to support Oregon Starbucks stores trying to unionize. Riccio, a longtime union organizer, said he was motivated to come because there are more Starbucks stores unionizing on the West Coast than anywhere else in the country.

Riccio said that in all his years of organizing, he’s never seen such momentum coming from workers: “This monumental worker-led movement is actively rewriting history.” He noted: “Today there are 250 Starbucks stores across the country that have filed for unionization. . . . you don’t need a piece of paper from the government to say we are a union. Workers that are organizing are already a union.”

Quinten spoke at the protest — he was one of the first Starbucks workers in Portland to get fired for union organizing. He announced that on May 17, four Portland Starbucks stores will be voting to unionize. Quinton said: “I was treated very badly just because I was trying to improve working conditions by organizing a union.”

Protesters talked to customers approaching the store, turning them away during the demonstration. One woman said she was going to start boycotting Starbucks, that what they are doing to employees is terrible and that Starbucks prices are too high anyway.

Riccio said that workers, who are the vast majority of people, make all the wealth in this country. Ian said he made three drinks in only five minutes, which sold for enough money to pay his wages for the hour. He asked: Where are all the rest of the profits going that Starbucks makes off the workers? He answered: “To the bosses and CEOs.”