There was a particular phrase current in the U.S. during the 1980s and ’90s: “crack baby.” A crack baby was the worst child a person could give birth to, as they were born hooked on crack cocaine and would be at a greater risk of having mental and physical disabilities and increased criminality as they grew up. They were called “a biological underclass” and “lost kids.”

Terrifying, right? What could be done about such a problem?

Well, nothing. Why? Because there was never such a thing as a “crack baby.” Yes, babies can get exposed to “crack” in the womb, but surprise! This doesn’t impact their lives.

What does impact these children is poverty and the harm it creates. While cocaine is not good for a fetus (or anyone), and it does cause the fetus to be smaller, studies have found these children reach “normal” size in childhood and adulthood. (New York Times, Jan. 27, 2009)

An over 20-year-long study that tracked the development of so-called crack babies found that crack cocaine did not, in fact, stunt or otherwise harm the children in a permanent way. (NPR, July 31, 2013)

The study found that legal drugs, such as alcohol and tobacco, were more harmful to fetuses and children than crack cocaine. Even the founding mythmaker of “crack babies,” Dr. Ira Chasnoff, acknowledged that so-called “crack babies” were not stunted and that their development was, indeed, normal. (National Drug Strategy Network NewsBriefs, September-October 1997)

There have been other studies that have shown statistically insignificant differences in IQ between babies exposed to crack cocaine and those who are not. But since the concept of an intelligence quotient is a product of eugenics and racism, it’s not worth noting that difference, regardless. (Business Insider, July 23, 2013; Anti-Racism Daily, June 24, 2021)

Doctors and sociologists have claimed that people exposed to cocaine at birth will be irredeemably impacted. But the fact has become clear that it is poverty that creates the issues claimed to be the result of crack cocaine. During their childhood, their homes and neighborhoods were inspected. As they grew older, they were asked about violence they had seen or grown up with. When they had seen or lived near violence, their rates of mental illness rose.

Researchers did scans on both exposed and nonexposed children and found that there was no significant difference in attention span. All the different researchers could not find any major differences between the crack-exposed and the nonexposed. This led them to their conclusions about poverty as the primary cause. (Christian Science Monitor, July 25, 2013)

As a result of this research, Dr. Hallam Hurt, who was the chair of neonatology at Albert Einstein Medical Center and later worked at the Children’s Hospital of Philadelphia, was able to say, “Poverty is a more powerful influence on the outcome of inner-city children than gestational exposure to cocaine.” (Children’s Hospital of Pennsylvania, Oct. 21, 2013)

The racist, anti-poor ‘War on Drugs’

What can be done about poverty? One answer is to seize the wealth of the rich and distribute it to people in need. That’s only one idea!

But the capitalist-driven government of the United States is not interested in a War on Poverty. Its representatives seek only a War on Drugs. And the War on Drugs is truly a war on Black, Brown and poor white people.

The “War on Drugs” officially began June 1971, when President Richard Nixon declared drug abuse to be “public enemy number one” and increased federal funding for drug-control agencies and drug-treatment efforts. The reason? Not the long-term impact of crack cocaine on fetuses and children and predictions being made when those babies and children hadn’t even begun to grow up.

Instead this crackdown in law enforcement came from the need of capitalism to abuse and control workers who were the poorest, the most vulnerable — and the most likely to rebel. Simultaneous with the intensification of this war on the people came the rise of the prison-industrial complex and the push to incarcerate people for profit. 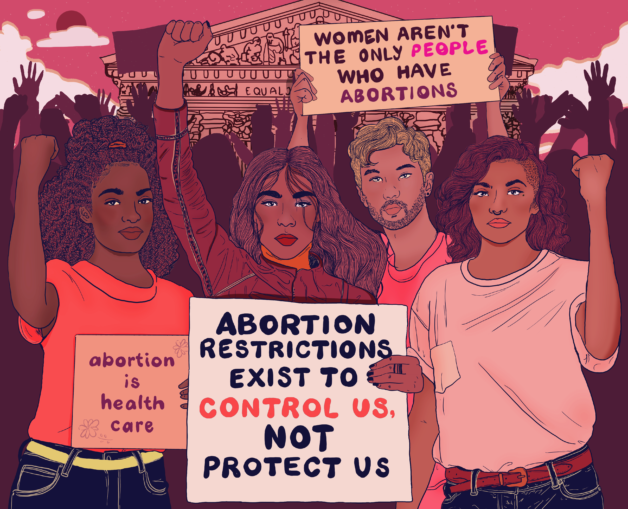 The “War on Drugs” through the crack-cocaine epidemic fueled more and more incarceration of Black, Brown and Indigenous people, including women and femmes. The myth was pushed that crack cocaine dissolves the maternal bond between mothers and their children. Under that cover, state governments seized children and scattered them into the broken foster care system.

The fake “War on Drugs” continued for decades, causing thousands of poor people of color to suffer and languish in prisons. Under President Barack Obama, there was some relief through the Fair Sentencing Act, which decreased the disparity between crack and powder cocaine possession. This, however, did not do anything for those whose lives were already taken (both metaphorically and literally) by the prison-industrial complex. Unsurprisingly, the national Fraternal Order of Police opposed even this tiny step.

Pregnant people of all nationalities demonized

The crack epidemic was one of several drug epidemics in which pregnant people or people with young children were stigmatized and maligned. The crystal methamphetamine- and opioid-epidemics — which primarily affected white people although Black and Brown people also use them  — uniquely impacted women and other people who could get pregnant.

Just like with the “crack baby” myth, there came the “meth baby” and the “Oxytots.” The “meth baby” idea has yet to be proven; it seems that infants born to parents who use meth are not born addicted to it. The major factor in whether or not “meth babies” are healthy is whether or not the parents give them proper care and treatment after birth.

Fox News gave the name “Oxytot” to the latest generation of infants born to parents who use drugs. While it is true that infants born to opioid-addicted parents can and do experience withdrawal from that drug, the babies are not born “addicted.” They are born dependent.

Difference between addicted and dependent babies?

Addiction is the set of behaviors and mindsets that people have in order to fuel their dependency. Dependency is simply the mental or physical need of a drug. Babies cannot be born addicted, nor do all babies born dependent on opioids grow up to abuse drugs.

Addicted parents are maligned as having failed to do the right thing for their dependent infants. Indeed, mothers particularly were blasted as abusers for failing to stop their addiction, despite the medical fact that addiction can’t just be stopped on a dime.

In California, Chelsea Becker — a crystal meth addict — gave birth to a stillborn baby, Zachariah. Becker had prepared for Zachariah’s birth by buying all the needed baby supplies. She wanted and loved her baby. But when she started to bleed and was taken to the hospital where she delivered him, the hospital reported the death of Zachariah to the coroner. The coroner found that he had methamphetamines in his system. Becker was then arrested and charged with homicide.

The judge in the case dismissed the charge, because there was no proof Becker knew that meth could cause stillbirth. (Los Angeles Times, Nov. 26, 2019; New York Times, May 20, 2021) The law used to punish Becker was intended to protect women in domestic violence situations whose fetus died as the result of a woman being assaulted, not to punish mothers for miscarriages, stillbirths or abortions.

But similar laws have been used during the crack, meth and opioid epidemics to punish women and others who could get pregnant for being addicts. The portrait constructed of a drug addict or a substance abuser is someone who is not capable of loving or taking care of their children. Media worsens the stereotype, portraying addicts as the most selfish beings in the world, only caring for their own fix and not caring about the world around — or inside — them.

The major question surrounding people assigned female at birth who use or abuse drugs is this: Can they be good parents? Do they deserve to have children? The answer is yes to both. While some might need aid from family, friends or social services, they can be good parents and love their children like anyone else.

One last problem related to the question of the drug epidemic and reproductive health is whether or not drug users should be sterilized — yes, sterilized.

Harris says that animals are spayed or neutered and that the same should happen to drug-addicted women. Her organization hands out $300 after long-term birth control or sterilization is administered. This form of “free-market” eugenics cannot be allowed to stand.

To protect abortion rights for everyone, we must protect all forms of reproductive justice for the most oppressed and vulnerable. This means addicts too.