May 8 — When Jill Biden met Olena Zelenska, the spouse of the Ukrainian president, in Uzhhorod, a small city in western Ukraine a few miles from Slovakia, on Mother’s Day, she said to the world that “the people of the United States stand with the people of Ukraine.” 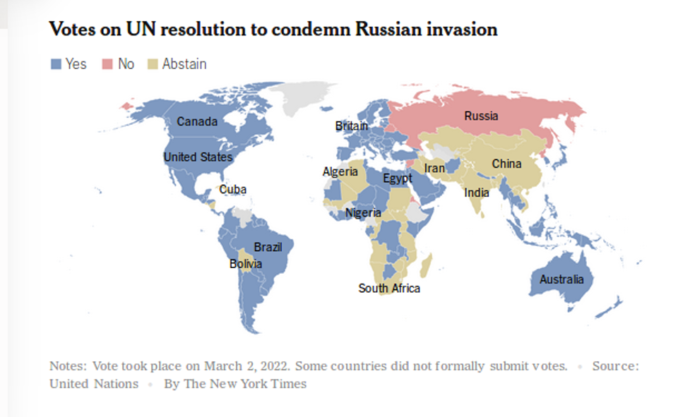 China and India, each with a population of around 1.4 billion people, abstained on the U.N. vote condemning Russia.

Right now, what is true is that U.S. imperialism is feeding weapons and military trainers to the Kiev regime, with the full backing of the administration, Congress and the Pentagon. The U.S. ruling class is lined up supporting the use of Ukraine and its people against Russia.

A big part of that offensive is the propaganda war. All the vast public relations apparatus of the U.S. government and its allies in the European Union have undertaken a vigorous and intensive campaign, on multiple levels, to present Jill Biden’s claim as truth. That is, the campaign aims to keep the public in tune with the U.S. aggressive moves, even if it risks a major war between the U.S., along with its European allies, and Russia.

Examining how U.S. television covered Jill Biden’s visit is instructive. It showed a warm and friendly encounter, mixing up kids and compliments, with plenty of hugs and handshakes. The next story, which got nearly three minutes, was about a tragic attack on a school-bomb shelter that left 60 people dead. Television news attributed it to Russian forces, without any attempt at verification, but mainly focused on the suffering of Ukrainians who survived the attack.

The May 8 visit of Russian Deputy Prime Minister Marat Khusnullin to the city of Mariupol got a few seconds. Khusnullin is in charge of construction and urban development for Russia and posted on the Telegram platform, “Restoration of peaceful life begins in the regions. There’s a lot of work to be done. We will help, in particular . . . with providing humanitarian aid.” (Reuters, May 8)

This is a typical presentation in U.S./European media: the conflict with all its tragedies, suffering and deaths is presented from the viewpoint of the Ukrainian regime, which coincides with that of U.S. imperialism. How the Russian side views these events — important to present in a fair and balanced report — is ignored.

The New York Times, which has had overwhelmingly anti-Russia news articles and commentary on the crisis in Ukraine, has recognized that many of its readers are skeptical about the justifications the U.S. and European corporate media give for the war against Russia.

To address this question, the Times has run articles — one on March 11 updated April 20, with another on April 20 devoted to the maps the Times creates — on how it verifies facts and creates reports and photographs. The Times described how it devoted much care and resources to this process, but it interviewed no Russian soldiers. Nor did it interview residents of Lugansk and Donetsk, who have struggled against the Kiev regime’s attacks since 2014, experiencing war and suffering during the past eight years.

Notice particularly that China with a population of over 1.4 billion people and India with nearly 1.4 billion people both abstained on the U.N. vote condemning Russia. Even in the European Union, where Washington’s close imperialist allies like France and Germany firmly support an embargo forbidding members of the EU from buying Russian energy, Hungary, which is landlocked, has vetoed this embargo.

RT began in 2005 as Russian TV, an English-language broadcast from Moscow. Five years later, RT America was set up in Washington, even though it still got Russian state funding. RT America produced thousands of hours of programming designed to present Russian life, attitudes and policies to a U.S. audience.

Al Jazeera news agency is a similar media company funded by Qatar, an oil-rich emirate in the Persian Gulf.

RT America distributed its reports over channels on YouTube and other, smaller streaming services. Immediately after the conflict between Russia and Ukraine began, management ejected RT from the YouTube platform and the other smaller networks. While it is still possible to find some RT reports on alternative sites, its main archive and main channel have been closed down.

Google, Twitter and Facebook banned all content that presented the Russian point of view beginning in early March, claiming that they were protecting their users from “disinformation.” They could do this in the United States because they are private companies.

In the European Union, the diffusion of RT and another Russian news source, Sputnik, was banned. And of course the decisions of Google, Facebook and Twitter stood there also.

The question raised by all this censorship and distortion that the United States and its powerful media companies, joined by the EU, are carrying out, is: What crimes, what power grabs and what aggression are they trying to hide?