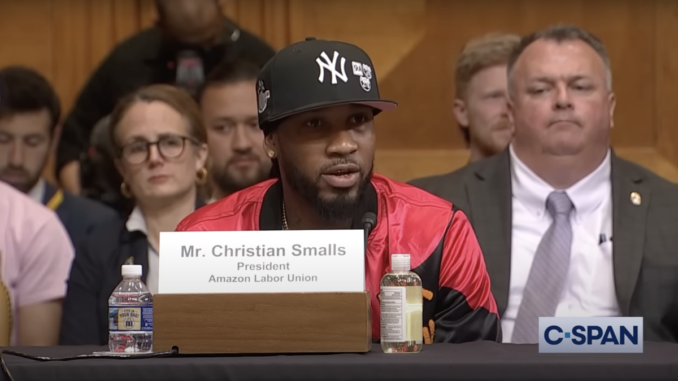 Amazon Labor Union (ALU) President Christian Smalls garnered widespread attention May 5 when he raked Senator Lindsay Graham over the coals at a Senate Budget Committee hearing. Senator Bernie Sanders called the hearing to raise the issue of companies like Amazon having government contracts despite engaging in illegal union busting. The Republican from South Carolina accused Sanders of having “determined Amazon is a piece of crap company.” (cnbc.com)

“It sounds like you were talking about more of the companies and the businesses in your speech, but you forgot that the people are the ones who make these companies operate and that we’re not protected,” Smalls retorted. “We cannot allow Amazon or any other employer to receive taxpayer money if they engage in illegal union-busting behavior and deny workers’ rights. We cannot provide federal contracts to these employers. We cannot allow them to receive taxpayer subsidies from our state and local governments.”

The hearing followed a meeting Smalls, along with organizers from Starbucks Workers United and others, had with Vice President Kamala Harris and Secretary of Labor Marty Walsh. Right after the meeting, President Joe Biden renewed a $10 billion contract with Amazon for cloud computing.

Smalls testified that the ALU had filed 40 Unfair Labor Practice charges against Amazon with the National Labor Relations Board. The NLRB informed the union May 6 that the charges had merit. The ULPs include mandatory “captive audience” meetings, disguised as “trainings,” taking place around the clock during working hours.

Amazon has spent millions of dollars on the anti-union consultants who develop the material for these meetings. The company has no qualms about making misleading and blatantly false statements, such as claiming that having a union at Amazon would mean workers would be fired if they don’t pay union dues. Workers have been threatened with loss of benefits or warehouse closings if the majority votes for the union.

Smalls was fired two years ago for organizing workers at Amazon’s JFK8 warehouse in Staten Island, New York — the first in the U.S. to vote a union in. ALU won the NLRB-supervised election April 1. Now two ALU organizers have just been fired.

The ALU’s loss in a second election at a Staten Island sorting facility has to be viewed in the context of the extreme union-busting tactics employed by Amazon.

It was very hard for workers and unions to get any kind of help from the NLRB under President Donald Trump, who appointed members of union-busting law firms to the five-person Board. Now three of five board members are Democrats, one appointed by former President Barack Obama and two by President Joe Biden. NLRB General Counsel Jennifer Abruzzo was appointed by Biden after he fired Trumpite Peter Robb from the position.

But guess what? It’s still nearly impossible to get the NLRB to really do anything about the illegal union busting going on every day at Amazon, Starbucks and countless other employers.

Abruzzo has recommended making mandatory captive audience meetings illegal, because they interfere with the right to organize, recognized since 1935 under the National Labor Relations Act that created the NLRB.

So why hasn’t the NLRB, with its Democratic majority, voted to implement Abruzzo’s recommendation? Maybe it’s the same reason the federal government does business with anti-union companies, even under a Democratic administration — that both parties uphold the capitalist system of exploitation which unions pose a threat to.

Besides, even if the NLRB were to enact a ban on these intimidating meetings, the agency has no teeth when it comes to enforcing the law. While the 1935 law enshrined the right to organize as a basic protection, it contains no penalties for companies that violate workers’ rights.

Think about it. If a person breaks a window in someone else’s house, for example, there are consequences. But not when a company breaks unions!

Nevertheless the ALU is undeterred in its mission to organize Amazon. In fact, Chris Smalls told Bloomberg Technology after the hearing May 5, “We’re going nationwide.”