May 1 — After two months of war, the Biden administration, including the House of Representatives, the Pentagon and individuals connected to the intelligence establishment, have made it clear to the world that Washington plans a major war to wreck Russia. They demand that their imperialist allies join this war. 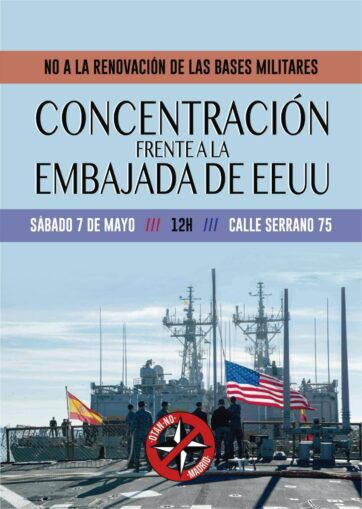 Poster calls for anti-war action in Madrid May 7 in front of U.S. Embassy.

For the working class and all oppressed peoples within the U.S. and in Europe, recognizing this development as a threat to their own welfare and to their very existence is the important first step toward mobilizing antiwar resistance.

Even if a world conflagration is avoided, the working class in all countries involved will pay the costs of a protracted war in Ukraine. The diversion of government budgets to the war effort will diminish defense against COVID-19 and subsequent pandemics and sabotage programs aimed to soften the climate crisis.

After visiting Kiev with Secretary of State Antony Blinken April 24, Secretary of Defense Lloyd Austin said this to the world: “We want to see Russia weakened.” The April 25 New York Times wrote that this implies “that the United States wanted to erode Russian military power for years to come.”

According to the April 28 Times, “Biden signaled a vast increase in America’s commitment to defeating Russia in Ukraine on [April 28] as he asked Congress to authorize $33 billion for more artillery, antitank weapons and other hardware.”

The U.S. this year “would be authorizing $46.6 billion for the Ukraine war, which represents more than two-thirds of Russia’s entire annual defense budget of $65.9 billion” and more than what the U.S. spent each year during its occupation of Afghanistan.

Washington and its NATO allies plan to continue to pour weapons into Ukraine to use Ukrainians to fire at and kill Russian soldiers. Some artillery and rocket shells have already been fired into Russian territory.

On April 30, Speaker of the House Nancy Pelosi met with Vlodymyr Zelensky, an actor and comedian whose current role is as Ukraine’s president. The next day Pelosi rephrased Austin’s statement at a news conference in Poland: “America stands with Ukraine. We stand with Ukraine until victory is won. And we stand with NATO.” (NY Times, May 1)

Biden, Pelosi and Austin can anticipate support for U.S. aggression from the Senate Republicans, who vetoed any of Biden’s popular promises for COVID-19 aid, reduction of student loans or the “Build Back Better” plan. The Democrats’ record is to abandon campaign promises without a fight.

The Democratic Party and the Republican Party leadership support war against Russia. That Republicans in the Senate will continue to find fault with Biden’s conduct of the war has nothing in common with real opposition to the war program. Such opposition must arise outside the two war parties.

Another, “unofficial” agency of U.S. intervention in Ukraine is the “International Legion” of foreign fighters integrated into the Ukrainian army. The May 1 NY Times described Malcolm Nance, a 20-year veteran of U.S. Navy intelligence, as the “public face of the legion in Ukraine.” After his retirement and 9/11, Nance was active as “an intelligence and security contractor in Iraq, Afghanistan, the UAE and North Africa.”

Nance has also written books about counterterrorism, mostly about al-Qaida and the “Islamic State” groups, and about alleged ties between Russian President Vladimir Putin and former U.S. President Donald Trump. It is unclear if Nance’s role after he left the Navy has been mercenary — or official, but disguised.

All elements of the U.S. imperialist state — military, intelligence and administrative — are lined up to use Ukraine as a battering ram against Russia and to use the Ukrainians as cannon fodder. And while no NATO or U.S. forces have officially entered the war, the U.S. is sending 8,000 additional U.S. troops to Europe and an unknown number of contractors, that is, mercenaries. Some are in Germany training Ukrainians to use advanced weapons.

Biden said April 28 that he would demand more military aid for Ukraine from other NATO powers. The first reactions from the European imperialist ruling class and its representatives in the governments of Britain, France, Germany, Italy, Spain and the smaller Western European states have been to line up behind the U.S. war, sending weapons to Ukraine and increasing their military budgets.

To stay on Washington’s side regarding sanctions against Russia, these Western  European regimes have to sacrifice the extensive trade relations they have with Russia and look for alternatives to less expensive Russian oil and gas. German industry has been dependent on Russian gas.

Some official voices have been heard in Western Europe differing with the goal of changing the Russian government, that is, deposing Putin; but no ruling-class forces have dared to challenge the U.S. head-on.

Similar to the mass reaction in the U.S., the European antiwar movement was stunned by the outbreak of the war and swamped by the avalanche of anti-Russian propaganda. This movement is now beginning to mobilize against what they see as the dangerous threat of a nuclear war.

Workers in Italy and Greece have interfered with arms shipments to Ukraine. Spanish anti-imperialists have called a demonstration for May 7 in Madrid at the U.S. Embassy. In Vienna, Austria, people held a demonstration demanding the country maintain its neutrality.

A NATO Summit is scheduled for the end of June in Madrid. This will be a gathering of the warmakers and is the obvious place for a massive antiwar action, which anti-imperialist groups have begun to plan and which the Spanish regime has already allocated over $30 million to repress.